FROM THE FIELD
World Water Day 2012

Geocharts: Water Challenges Around the World

The interactive maps below provide an overview of some of the water challenges different parts of the world currently face. Mouse over countries to view statistics, and use the area below to learn more about the issues and load other datasets.

The dependency ratio is the percentage of renewable water resources that originate outside a country. Countries with high dependency ratios are more dependent on their neighbors for water resources, and indicate regions where conflicts over water might occur: Asia, the Middle East, India and Pakistan, and even lowland countries like the Netherlands.

As part of the UN’s Millennium Development Goals program, much progress has been made over the past decade to expand access to clean drinking water to people in developing countries. However, 44% of the 783 million people who do not use an improved source of drinking water can be found in Africa.

This statistic reflects the amount of water each country withdraws annually as a percentage of its total renewable water resources. Every year the arid countries of the Middle East use much more water than they receive from renewable sources such as rainfall, rivers and groundwater recharge.

Over time, irrigation can cause croplands to become saline or waterlogged, resulting in declining productivity and soil degradation. Soil salinity is a significant problem in the arid countries of Western Asia. The bulk of Turkmenistan’s water resources, which can be high in mineral content, are used for irrigation. Estimates of the percentage of Turkmenistan’s cutltivated land that has been damaged by irrigation run as high 90%.

*Values are latest available and may be comprised of aggregate, estimated or modelled data. 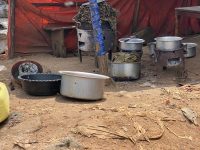 Affordable Energy and Water Are Out of Reach for the Urban Poor. Providing Both Would Be Simple.
Subscribe
Login
0 Comments
Inline Feedbacks
View all comments
wpDiscuz
0
0
Would love your thoughts, please comment.x
()
x
| Reply
This website uses cookies as well as similar tools and technologies to understand visitors' experiences. By continuing to use this website, you consent to Columbia University's usage of cookies and similar technologies, in accordance with the Columbia University Website Cookie Notice.Close