Just How Effective is Green Infrastructure? A green street in the Bronx River sewershed

More than half of all Americans now live in or near a coastal city, but the density and paved nature of cities threaten the very ecosystems they depend on. The wastewater, sewage and urban runoff that flow from cities are responsible for most of the coastal zone pollution in the U.S.

But how does green infrastructure work and how effective is it really?

Wastewater, sewage and urban runoff flowing into water bodies can cause eutrophication, a type of water pollution wherein algae bloom, then die, consuming oxygen and creating a “dead zone” where nothing can live. Economic damage from eutrophication in the U.S. is estimated to be $2.2 billion a year.

Green infrastructure provides areas for water to drain, reduces a city’s impervious (paved) areas, filters pollutants out of runoff as it passes through vegetation, and cools the city as temperatures rise with climate change. It can also reduce energy use, clean the air, sequester greenhouse gases, restore biodiversity, and increase property values, health and well-being.

To figure out how effective it is, a team from Columbia University headed by Patricia Culligan, professor of Civil Engineering and Engineering Mechanics and co-director of the Urban Design Lab, has been awarded $3 million from the National Science Foundation’s Coastal SEES (Science, Engineering and Education for Sustainability) program.

Most urban green infrastructure to date has been focused mainly on reducing stormwater volume through retaining rainfall or runoff; there has been little real time monitoring, or in-depth study of the legal issues involved or citizen response to green infrastructure. Culligan’s team, however, will develop and test “high-performance” green infrastructure that can provide multiple benefits, build a platform for a real time monitoring and control system, study the role of climate change and citizen involvement for long-term effectiveness, and propose solutions to legal obstacles that currently hinder the wide-spread implementation of green infrastructure. The project brings together experts from civil engineering, law and policy, plant science, climate, microbiology and community outreach.

“What I’m excited about,” said Culligan, “Is the number of Earth Institute units being brought into this project…This project is an example of what the Earth Institute is about: law to microbes to climate change to urban design to engineering.“

The 12 sewersheds use “combined sewer systems” where stormwater flows into the same pipes that the sewage system uses. Normally, the combined flow is sent to a wastewater treatment plant before being discharged into the local water body, but in wet weather, the system gets overwhelmed, and combined sewage and stormwater overflow untreated into the water body. Culligan’s team will select a dozen sites in the sewershed, including green streets, tree pits, green roofs and bioswales (vegetated areas designed to remove sediment and pollution from runoff) for in-depth monitoring; stormwater flow, air, surface and substrate (growing medium) temperatures, and substrate moisture content will be measured. In addition, monthly field sampling will measure water quality and pollutants, especially nutrients such as nitrogen and phosphorus, which can cause eutrophication and contaminate groundwater.

While some of the monitoring instruments will be expensive and customized, Culligan also hopes to place cheaper sensors all over the green streets.

“I’ve got a couple of green streets where I’ve instrumented them very well so I can be fairly certain about how they’re behaving, and then I’ve got hundreds of others where I’ve got cheap sensors that I can almost calibrate against the ones I’ve instrumented well…if we can get this to work, then there’s the opportunity of ubiquitous sensing around the city,” said Culligan. The scale of monitoring of green infrastructure that is planned is unprecedented.

Researchers will also identify the chemical composition and microbial and fungal communities of the substrate, study plant and insect health and diversity, and measure particulates and CO2. The data will be used to build models that measure the performance of individual green infrastructure components in order to project their stormwater and nutrient runoff, and air-particle reduction and biodiversity in relation to their locations and environmental conditions. This information will be compared with that from similar models based on data from impervious areas.

Nandan Shetty, an engineering Ph.D. student working with Culligan on the project, took me to visit some green infrastructure in the Soundview Park section of the Bronx River sewershed. He explained that the city has gone block by block through the area with city agencies to see where to implement green infrastructure. First it must determine if enough water collects in a given impervious locale to warrant a green street or bioswale. Then the Department of Transportation decides if there’s enough street and sidewalk space. If so, the Department of Parks chooses what type of landscaping and plants will be used. The plants are generally selected for their tolerance to drought, salt and standing water. Nandan Shetty in front of the green street he worked on

One of the green streets Shetty worked on includes a false catch basin to capture excess rainwater with perforated pipes that feed into the vegetated area. Shetty periodically checks water samplers, PVC pipes sunk into the soil that collect water, to measure how the amount of nutrients (oils, heavy metals, nitrogen and phosphorus) in water that has filtered through the soil and plants of the green street compares to the amount in water flowing in from the street.

“You could have a different medium. There have been studies in the lab that have shown that you can possibly keep the physical properties that the Department of Parks would like, which is the rapid drainage, but maybe there is different chemistry or surface properties in the medium that could help deal with the nutrients,” said Culligan. A different palette of plants or a green street that stores water first then releases it into the ground before it rains might also help minimize nutrients. The project will propose new green infrastructure construction approaches that most effectively reduce nutrients, and these new designs will be field-tested. They have looked at the quantity and quality of water runoff from green roofs in relation to the size of storms. To incorporate climate change into the Coastal SEES project, they will be collecting similar data for green infrastructure at the street level, then combining it with climate trend data in climate models to project the performance of green infrastructure into the future.

Michael Gerrard, director of the Center for Climate Change Law, will be looking at the legal impediments to green infrastructure—there are mainly two. The first is that work done on a coastline often requires state and federal permits that can be difficult to procure. The second is that the Clean Water Act is mostly oriented toward solutions that involve costly hard infrastructure, such as pumping stations and treatment plants; but green infrastructure could ultimately be much more economical and equally effective.

Gerrard said, “Patricia Culligan and her colleagues will tell us what kind of work needs to be done where. We can then identify what kind of permits would be needed, how long they usually take to get, whether they are likely to be obtainable, and based on that, ask is this really a constraint or not? And if it is a constraint, we may come up with recommendations for how the constraint can be lessened or removed.”

For projects like green infrastructure, public hearings and the providing of information to the public are often required by law. Gerrard and his team will also be studying the requirements for citizen participation in this area to determine if it’s enough of the right kind.

Getting citizens involved is critical to the success of green infrastructure, so some researchers will be trying to model and predict people’s responses to green infrastructure. “People may value one green infrastructure form over another even though environmentally, it may not be the best, but if they value it, they will take care of it. So over 10 years, that actually might be a better choice,” explained Culligan. For green infrastructure, which requires thousands of individual components to come together and behave collectively in a certain way as a system, public buy-in is essential. Culligan, Richard Plunz, director of the Urban Design Lab, and the Bronx River Alliance will be creating tools to raise awareness and educate the community about its local green infrastructure. Curriculum material will also be developed for a summer high school program that will be run in conjunction with Columbia University’s School of Continuing Education.

With up to 90 percent of wastewater in developing countries flowing untreated into rivers, lakes and coastal zones, eutrophication is the most prevalent water quality problem around the world. Culligan is hoping the Coastal SEES project can also help other cities and developing countries deal with their wastewater and stormwater issues.

“The amount of runoff that’s going into their local water bodies is not only a huge environmental health problem, it’s an economic problem…they’re killing fish that they rely on,” she said. But Culligan is hopeful that people’s attitudes towards the environment are shifting. “The people making decisions are thinking more long-term than prior generations. I think there’s much more sensitivity to the impact mankind has on the environment.”

The Principal Investigators on the Coastal SEES project:

Michael Gerrard, director of the Center for Climate Change Law 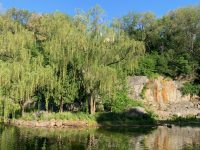 Why Nature Is Good for Us: An Illustrated and Animated Guide
Subscribe
Login
2 Comments
Oldest
Newest
Inline Feedbacks
View all comments

Has this study reached any interesting conclusions? If not, Is there any way we can look at preliminary results? I am conducting research on natural infrastructure because there is a possibility of incorporating it to the strategic plan for urban development of Paraguay’s capital city, Asunción.

A good article about Green Infrastructure. I think rain gardens are good and very hardworking elements of the whole green infrastructure approach. They must be used in every house with a garden. If there is an option, they must be connected with green roofs also.

In Turkey, the government takes action on rain gardens. They want all public buildings will have a rain garden. What a nice idea; but in the action side, we will see what will happen.