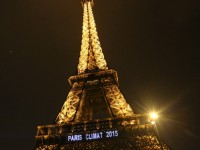 Optimism, But Also a Hard Bottom Line for Island States

Students from the University of Waterloo in Canada had a breakfast meeting with the Kiribati delegation and met the island nation’s president, Anote Tong, on Dec. 6. From left: Kadra Rayale, Rija Rasul, Tong, Vidya Nair and Laura Maxwell.

Four students in the Masters in Development Practice program at the University of Waterloo in Canada are in Paris for the UN climate summit to represent the Republic of Kiribati. The small island nation is one of several threatened by sea level rise.

This week they have been sitting in on various thematic discussions. Rija Rasul reports she has attended climate finance discussions. Her colleagues Laura Maxwell and Kadra Rayale have been in sessions on adaptation to, and loss and damage from climate change. Vidya Nair has been in discussions about technology and capacity building.

The talks are meant to wind up Friday, and the students are hopeful.

“Reaching an agreement would firstly mean an increase in awareness for the particular situation faced by small island developing states,” Rasul said. “States such as Kiribati are on the front line of climate change since they are already experiencing its effects, and an agreement would enhance recognition of [their] vulnerability.” Many nations, particularly some of those most vulnerable to climate impacts, are calling for the agreement to recognize the need to keep global warming to 1.5 degrees C. Going into negotiations, the target was 2˚C over the pre-industrial-era average, which many feel is an upper limit needed to avoid the worst effects of climate change. Many feel 2˚C is not ambitious enough.

According to The Guardian news website, “Trinidad and Tobago’s delegate warned the Paris agreement would be ‘seriously flawed’ if it did not stick to an ambitious 1.5˚C target to limiting warming. Barbados offered even stronger language, warning: ‘We will not sign off any agreement that represents a certain extinction of our people.’ “

Rising sea levels have already engulfed large areas of Kiribati, and nearly a quarter of the country’s population has had to move, according to reporting by IRIN, an independent news website that focuses on humanitarian issues.

“What we need is a boost from the international community to lift us out of the water,” Tong told delegates in Paris, according to a story on the IRIN site. Tong and other leaders of similar states are pushing for the final Paris agreement to include measures that would facilitate migration as an adaptation to climate change threats and build capacity to cope with natural disasters and displacement. That will require significant financial support from the international community, IRIN reports.

According to The Guardian, Tong remained upbeat: “I’ve always said we need to come away from Paris with a deal that would ensure the survival of people. Nobody left behind—that’s the mission all along. This is quite a long way from where we started. It’s coming together.” Another contentious point is to what degree wealthier nations will contribute money to help poorer nations adapt. U.S. Secretary of State John Kerry has said the United States would double its commitment to help countries already under threat.

“There are countries … for which climate change is an existential threat today,” Kerry told the Paris gathering on Dec. 9. “For them, this isn’t a matter of annexes or peak years—it’s a matter of life and death. …

“One of the hard realities that we’re facing is that our collective delay now means that some of the impacts of climate change can’t be reversed,” Kerry said. “We have a moral responsibility to adapt and prepare for those impacts and enable the most vulnerable among us to be able to do the same.”

“We have definitely seen an increase in optimism as the days progress,” Rasul said. “And although negotiations are ongoing, we are hopeful for an ambitious agreement, which in turn would hopefully lead to increased resilience and capacity building.”