Radhika Iyengar began her career as a library teacher in a Delhi slum while she worked at a non-profit organization, Pratham. Her job involved delving into how children in urban slums and rural parts of India were learning.

Equipped with a master’s degree in economics from the Delhi School of Economics, she also studied what potential interventions and solutions could help in overcoming early literacy challenges. Radhika Iyengar is director of education at Columbia University’s Center for Sustainable Development. She’s fighting for access to education for some of India’s most marginalized groups, and finding creative ways to blur the line between schools and communities.

After completing her Ph.D. program in economics of education from Columbia University in 2011, Iyengar joined the Earth Institute’s Center for Sustainable Development, where she is currently the director of the education sector.

As soon as she joined the Earth Institute, Iyengar started working along with a team at the Columbia Engineering School on an education intervention program in Nigeria as a part of the Millennium Development Goals scale-up project. Iyengar says that was the first time she realized that the education sector cannot work in isolation. After all, access to energy and reliable infrastructure like roads are vital for improving access to education.

Today, Iyengar continues to tackle complex issues related to disparities in educational development and learning gaps among children and adults in developing countries — including among one of the most marginalized tribal communities in India. She talks more about this work in the Q&A below, which has been edited for length and clarity.

While working on your Ph.D. dissertation, you also delved into how the literacy rate among tribal/Indigenous communities in Madhya Pradesh State in India was only 37% in 2011. In the last decade, has access to education improved for tribal communities in India?

Access to education has improved drastically over the past decade among students who are elementary school age. There are still some cultural barriers to girls’ education at the elementary school level in tribal communities. But overall, I would say that in the villages where I have worked in an Indian state called Madhya Pradesh — Alirajpur and Jhabua — many more schools have come up. Yet, adult literacy rates have not improved over the years.

Women in particular can’t join schools or college early in the morning because they have to take care of their families first. Also, we realize that a big part of education should be psychosocial support or just confidence-building that is neglected for many decades as a part of the education system.

Unfortunately, in these two regions there are few employment opportunities for tribal women, so they join the informal sector. There is a big mismatch between what the government is offering versus what the new demand is from the community side.

How did you launch the project on testing high levels of fluoride in the groundwater, and how it has been impacting communities in Alirajpur, Jabhua, and surrounding regions?

My mother runs a non-profit in the region, and I used to tag along with her during her fieldwork. As a child, I repeatedly observed children’s brown teeth and how adults were losing their teeth. I would wonder what was going on.

During my dissertation, I learned that the issue was fluoride pollution. Back then, I did not know what to do. But I knew this was a big problem, and that I had to do something about it.

Now we are working with Lex van Geen, a scientist at the Earth Institute’s Lamont-Doherty Earth Observatory, to educate communities in Alirajpur about the health impacts of fluoride contamination in groundwater. It is like a slow poison. Fluoride poisoning first causes dental problems. Eventually, it results in skeletal fluorosis or bone-related defects in children and also impacts the nervous system.

We found that the source of fluoride was from the rock formations in certain areas. Water is becoming scarce in these regions, and the wells have to go deep to draw groundwater. This has resulted in extremely high levels of fluoride in the hand pumps.

Within four months, we covered over 1,000 water points and found that 10 percent of them have high fluoride levels. Most of them are geographically close to each other. In most villages, at least one hand-pump contains safe water. But there are villages where the nearest hand-pump with clean water is several miles away. That means women and children particularly will have to walk long distances to get access to clean water.

We are now studying what factors could make people more likely to change their behavior and instead use hand pumps that have safe water.

To raise awareness about the high levels of fluoride in the region’s groundwater, we were organizing street plays and producing videos. Since adults could not read the posters (over 50% are still illiterate) street plays and videos were far more effective.

Also, we have tied up with the government to set up pipe water facilities from a nearby lake.

Video about the fluorosis testing and education project in India.

How did the local government respond to the findings of fluoride poisoning in groundwater?

We got a lot of support from the local water department and also from the Rural Development Department. We are now forming a committee at the district level to see how all of us can resolve these issues in a much more interdisciplinary fashion.

At the beginning of the project, Lex did a lot of fluoride testing in the groundwater. Later, we used a citizen science approach to work with the district administration after meeting with government officials from various departments. We also roped-in help from 60 volunteers who are local master’s in social work students and were keen to learn about this problem.

Our data is open-source, so a woman district collector, Surabhi Gupta, has been using them go to areas that had the highest groundwater fluoride pollution. She has done an outstanding job in getting everyone together and has been looking for solutions with a very dynamic approach.

What are some other research projects that you’re currently working on?

We are now working on early literacy issues in Burundi, Africa. Unfortunately, the schools are still closed because of the COVID-19 pandemic, so we are expecting a sizeable gap in terms of early literacy. The students are at least two to three grades behind, but now with COVID, we expect this gap to increase. We are working with the Burundi government to tackle these early literacy challenges. For example, we are coming up with alternative ways to help school children who cannot read books from their grade level.

The other project that I’m very passionate about is computer literacy for women. We are now launching vocational computer learning programs in India’s southern state of Telangana, and in my home state, Madhya Pradesh, with the help of a non-profit, Mahashakti Seva Kendra. We provide technical assistance and train facilitators on the professional development of women.

Video about one of Iyengar’s projects in her hometown of Bhopal, India. The project aims to provide sustainable livelihoods by making eco-friendly products.

Do public-private partnerships have a positive impact on education systems?

The COVID-19 pandemic has taught us that there is no way any standalone government program, even in the United States, can function effectively without parents being involved. Public-private partnerships are playing out in reality as we have our kids at home because of the pandemic.

That’s why I started the Eco Ambassadors Program, which combines education and environmental activism with mental health support during this time of isolation. In February we organized a mammoth Climate Summit, where over 500 youths joined us. Teachers, kids, youth communities, and parents were present to learn about how we can integrate climate change education into formal curriculums in New Jersey and New York.

We need to blur boundaries between communities and schools so that education can take place seamlessly. 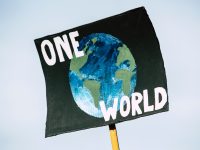 2023 Climate Resolutions: How Will You Make a Difference Next Year? 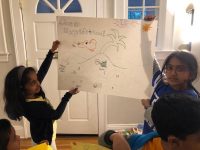 Education Isn’t Considered a Key Tool for Reducing Climate Risks, but It Should Be
Subscribe
Login
0 Comments
Inline Feedbacks
View all comments
wpDiscuz
0
0
Would love your thoughts, please comment.x
()
x
| Reply
This website uses cookies as well as similar tools and technologies to understand visitors' experiences. By continuing to use this website, you consent to Columbia University's usage of cookies and similar technologies, in accordance with the Columbia University Website Cookie Notice.Close