During the Last Ice Age, the Tropics Were Colder Than We Thought. Bad News for Us.

During the height of the last ice age, some 20,000 years ago, the earth’s higher latitudes were covered with glaciers. The tropics and mid-latitudes saw temperature drops, too, but not as drastic. Now, a new study says those lower-latitude drops—driven by the same low atmospheric carbon dioxide levels as the glaciations—were substantially greater than previously estimated. This could be bad news for the future, because what goes down also goes up—and the study suggests that it does not take much change in CO2 to do either. That strengthens the credibility of high-end projections for future global warming.

“This means that the earth’s climate system is much more sensitive to changes in carbon dioxide concentrations than we thought,” said study coauthor Martin Stute, a hydrologist at Barnard College and Columbia University’s Lamont-Doherty Earth Observatory. “So for the future, we can expect more climate change than we thought.”

The study was just published in the journal Nature. 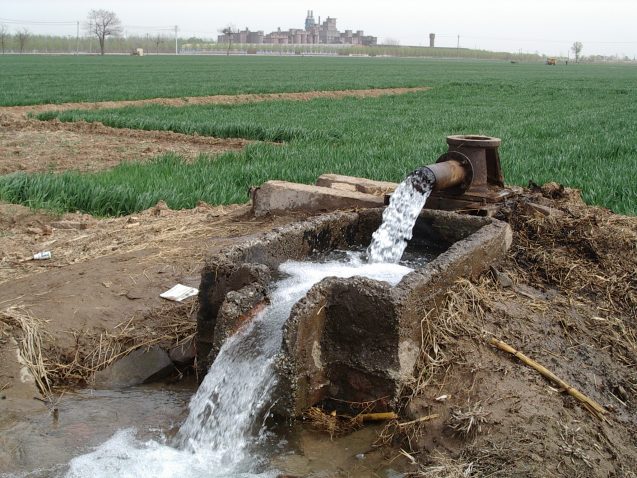 Ancient groundwater flows from a well in the North China plain during a 2004 field campaign to measure noble gases dissolved in the water. The abundances of such gases allow scientists to reconstruct past temperatures. (Werner Aeschbach)

Up to now, most studies of past temperatures have relied heavily on past abundances of temperature-sensitive plants and animals—often tree pollen on land, and remains of tiny shell-building creatures on seabeds. But interpretation of biological material is subject to many caveats, and may provide an inexact thermometer.

The new study rests on published and previously unpublished studies of groundwater samples taken since the 1970s on all continents except Antarctica; the water came from wells as deep as 1,000 meters. In the water, various researchers measured noble gases—rare, inert elements that dissolve at or near the surface, in predictable proportions that vary depending on prevailing ground temperatures, which in turn are close to air temperatures. Scientists can tell when the water entered the ground by measuring the radioactive decay of dissolved carbon isotopes dissolved at the same time. But the highly stable noble gases—neon, argon, krypton and xenon—do not change. Thus, based on their abundances, researchers can read what the temperature was at a given time thousands of years ago.

The new study shows that low- to mid-latitude land surfaces at low elevations cooled on average by about 5.8 degrees C (10.4 degrees F) during the last glacial maximum, between 26,500 and 19,000 years ago.  That is far more than previous estimates, which have ranged from about 1 to 4 degrees C. The paper supports a recent study of sea-surface temperatures that also found substantially greater low-latitude cooling than in most previous studies. It also lines up with evidence that high-elevation glaciers in the lower latitudes advanced in tandem with the newly quantified temperature drops.

The new estimates suggest greater sensitivity of the climate to atmospheric carbon dioxide than prior studies do. Based on the older studies, many scientists estimated that global mean surface temperatures rise 3 degrees C ( 5.4 F) with each doubling of atmospheric CO2. The new data suggests that temperatures actually go up 3.4 degrees C (6.1 F) per doubling. The finding is largely in line with current climate models, which generally predict a hotter future than does the paleo-temperature record.

Since the start of industrial times in the mid 1700s, CO2 concentrations have risen from about 280 parts per million to nearly 420 now, a 50 percent increase. Since about 1880, when widespread reliable instrumental records begin, temperatures have increased about 1 degree C, or 1.8 degree F. They are projected to keep rising in coming decades, even in the unlikely scenario that CO2 levels were to remain constant, because temperature changes lag behind CO2 changes. 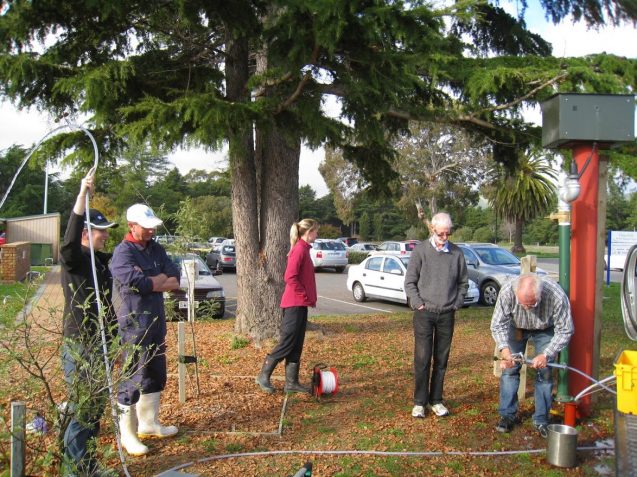 Study coauthor Martin Stute collects water from a deep well in Blenheim, New Zealand in 2013. The water sampled here was found to have entered the ground roughly 40,000 years ago. Noble gas compositions from throughout central New Zealand indicated that the region was 5.6° C cooler during the last glacial maximum, about 20,000 years ago. (Alan Seltzer)

“The rather high climate sensitivity that our results suggest is not good news regarding future global warming,” said coauthor Werner Aeschbach, of  Germany’s Heidelberg University. “The unpleasant implication for the future is that the warmest regions of the world are not immune to further heating.”

Much of the groundwater sampling and analysis for the study was done by Stute and various coauthors. Starting in the 1980s as a grad student, he worked across Europe, North America, South America, Africa, Asia and Australia. “Noble gas paleo temperature records are so powerful because they are based on a physical principle and are not much influenced by life—which always complicates everything—and short-term extreme events,” he said.

The paper’s lead author, Alan Seltzer, of the Woods Hole Oceanographic Institution, said that the alignment of the new analysis with climate models is important because climate models “provide an important tool that policy makers can use to decide on how to prepare for future environmental changes. This study alleviates the concern that, based on [temperature data from the past], models might over-predict the global mean temperature response to carbon dioxide. In fact, [it] is becoming clear that paleoclimate proxies and models are in agreement.”

The other authors of the paper are Jessica Ng, Justin Kulongoski and Jeffrey Severinghaus of Scripps Institution of Oceanography; and Rolf Kipfer of the Swiss Federal Institute of Aquatic Science and Technology.

This really helped me a lot It was the best and explained and answered my question.

A look at your map is very surprising. It appears that even equator was covered by a cold wave. Is this correct? It appears that there was probably no place human habitation. Did humans make any specific adaptions at that time?

Is this material copyright? Can people use it in their writings?

I think that you are doing a great job by clearing up a lot of misconceptions. Thank you and keep up the good work.