Trigger warning: In this personal essay, the author briefly reflects on a time when he contemplated suicide. If you or someone you know is having thoughts of suicide or self-harm, call the National Suicide Prevention Lifeline toll-free from anywhere in the U.S. at 1-800-273-8255. 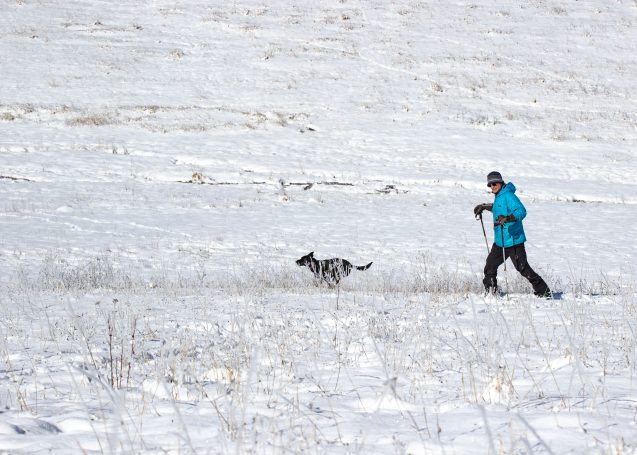 My father, Jack Tulhoske, on his last day skiing at his home in Potomac, Montana. Photo: Cascade Tuholske

The last time I skied with my dad was Easter Sunday, 2020. Though a late-season storm had blanketed western Montana in seven inches of snow overnight, by 8 A.M. the spring sun was already melting the white landscape. But that didn’t stop my dad, a man of endless optimism.

After scarfing down a breakfast of elk sausage and eggs, he told me we were going to head to the hills above the house for a few turns. I looked at him skeptically. But before I could protest, he grabbed his telemark skis, corralled our dog, Walter, and walked out the door. I followed, barely able to catch up. Even at 66, my dad was an ox.

In 2016, my parents moved from Missoula, Montana, where they’d lived for 31 years, to Potomac, a bucolic valley 20 miles east that’s tucked among the Garnet Mountains and cut through by the wide and meandering Blackfoot River. Their house sits in a thick forest of larches, firs, and pines overlooking a rolling meadow where elk graze in the spring. I hadn’t lived in Montana for nearly a decade. But just a few weeks prior to the ski outing, as the reality of the pandemic set in, I made a mad dash home from California, where I was finishing my PhD in geography at the University of California at Santa Barbara. The world was fraught with uncertainty—few people knew how bad things would get, nor was there any end to the pandemic in sight.

As someone who studies the impacts of climate change—specifically how climate change may render large portions of the most populated places on the planet inhospitable to human life—I spent much of graduate school weeping under my desk or having panic attacks between classes. One attack sent me to the emergency room, another to student counseling, which led me to a local therapist who repeatedly told me, “There’s nothing you can do about climate change.” It got to the point where I contemplated suicide.

As I pulled into Missoula at two in the morning, COVID felt like the start of a terrifying new normal.

My dad, Jack Tuholske, grew up in Clayton, Missouri, a suburb of St. Louis. Though my grandmother was a kind, persistent force, his childhood was chaotic. He was adopted at birth and lost his adoptive father young, followed shortly thereafter by his stepfather. As a teenager in the early 1970s, he became fixated on the environmental movement, sparked by the revolutionary optimism of the previous decade. But in seeking to emulate the 1960s, the only part he got right at first were the drugs. By high school he was regularly injecting methamphetamines and carousing with his friends while tripping on LSD.

Though he never specified who exactly helped him change his ways, I credit my grandmother, who sent him off to a National Outdoor Leadership School course in Wyoming. Weeks spent among the granite walls of the Wind River Range forged a lifelong infatuation with the mountains and imbued him with his mantra of choice: All problems are solvable. He would later tell me he “realized that shooting up speed and talking politics all night with my friends was not going to save the planet.” He began to ski and climb. By his mid-twenties, my dad had finished a degree in political science at the University of Washington and married my mom, who soon gave birth to my oldest brother. The three of them moved to Missoula so my dad could attend law school at the University of Montana. He graduated with honors and immediately began his own public-interest environmental law practice. 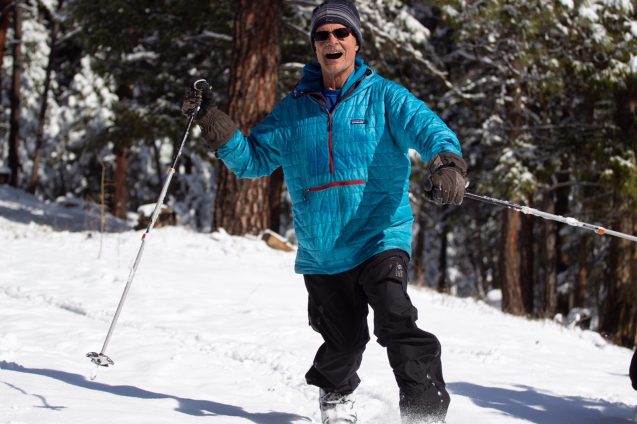 Montana became a part of him. He spent countless days adventuring—climbing remote routes in the Bitterroot Mountains with dirtbag partners, telemark-skiing with my mom on the Beartooth Plateau, and leading my brothers and I on backpacking trips across the Bob Marshall Wilderness. And he spent his life defending the state he loved. He litigated well over 200 cases to safeguard Montana’s public lands and waters, winning dozens of favorable judgments at the Montana Supreme Court and U.S. Ninth Circuit Court of Appeals. He almost never lost. The cases he argued led to the listing of the bull trout—a char that haunts any angler who has thrown a line into the Blackfoot—as an endangered species. Thanks to that designation, more than 19,000 miles of streams and rivers in Montana, Idaho, Washington, Oregon, and Nevada are now protected.

His success depended upon fostering community and building partnerships, often among unlikely allies. Only by cultivating trust could he convince Montana’s ranchers, tribal groups, and hunters and anglers to work in tandem with tree huggers to achieve his biggest victories against some of the United States’ most powerful people. In an increasingly red-versus-blue world, it was a rare accomplishment.

In May 2019, my dad was diagnosed with inoperable liver cancer. His doctors said he only had a few months to live. But when we set out to ski that Easter morning, he had already lived a year with cancer and did not look sick when we began descending the meadow. I saw optimism.

Within seconds, we both fell flat on our faces. Giant clumps of wet snow stuck to the bases of our skis. The night before, we forgot to divert our flood-irrigation system, turning the meadow into a soup of sticky slush. Nonetheless, my dad persisted. He scraped off his skis and started climbing into the timber above the meadow, Walter in tow. After 45 minutes, he found a shaded, north-facing opening with still crisp snow. An ear-to-ear grin spread across his face, and he accelerated into a single, final arcing turn. He died six months later.

On a day in late February this year, I went skiing alone at Montana Snowbowl, where I learned the sport as a kid. The temperature was below zero. Winter had arrived late but in full force, dumping four feet of snow in two weeks. Storms like that often cause undue climate optimism, which is reinforced by social media feeds falsely proclaiming that all is well because the powder has arrived. But the fact of the matter is that 2020 tied 2016 for the hottest year on record. Yet last year may end up being among the coldest we experience going forward. Like much of the Mountain West, snowpacks across Montana are declining and spring runoff is arriving earlier and earlier.

As I rode the lift in the frigid wind, I thought about my dad. From when I returned to Montana, in March 2020, until his death last October, I watched how he woke up at 4:30 A.M. every day, did yoga and push-ups, wrote briefs, taught remote law-school classes, and graded papers. Even on days he couldn’t walk, he still spent his afternoons on the Blackfoot, a fly rod in hand, with my mom and their grandchildren. It took watching him die—watching how he died—for me to begin living with newfound resilience and joy. For my dad, battling cancer during a pandemic, like battling those who threaten Montana’s public lands and waters, was just another problem to solve. There was never a need to be daunted. Instead, he lived with dedication and gratitude, day in and day out. “I am the luckiest man alive,” were the last words he spoke to me, another ear-to-ear grin on his dying face. 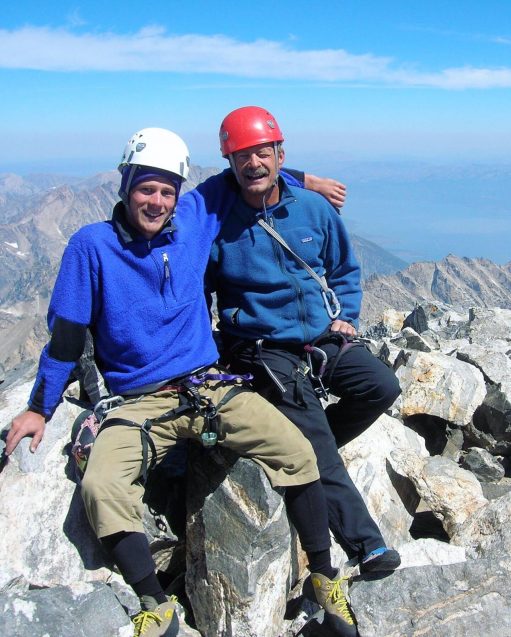 I was 18 when my Dad led me to the top of the Grand Teton, Wyoming. Photo: Cascade Tuholske

Climate change, too, is another problem to solve. But in doing so, it need not be a monastic quest toward nihilism. In April, I went skiing alone again. It was 68 degrees, 14 degrees above normal, and heat records were being broken across the state. The spring runoff again came early to the Rockies, forcing me to dodge huge brown patches of grass as I cut turns through the soft snow. That day, like every day since my dad died, I woke up well before sunrise to work. I returned from skiing and worked late into the evening. I no longer think about killing myself due to existential climate dread. It wouldn’t do anything to fix our climate problems. But pretending that everything is all right won’t either. Rather, like my dad, I strive to remain stoic in my resolve and optimistic to my core. Every problem is solvable.
_________________________________________________________________
Cascade Tuholske is an Earth Institute postdoctoral research scientist at CIESIN. He studies the intersection of climate change, urbanization, and food security, with a recent focus on urban extreme heat exposure.

This piece originally appeared in Outside.

Nice story about your father.

Nice story of your father. RIP

What a lovely tribute to your father–a man of optimism, service and love for the environment. It’s wonderful to hear of how his care for the earth has affected you so deeply. Thank you for your optimistic outlook and service as well.

Stumbled across this today. Love this and loved your dad. Beautiful.