New Report on U.S. Climate Litigation in the Age of Trump

Litigators responded to the Trump administration’s climate deregulation agenda by filing hundreds of lawsuits across the U.S. over the four years of the administration. A new Sabin Center white paper published today, U.S. Climate Litigation in the Age of Trump: Full Term, takes stock of 378 U.S. climate cases that responded or interacted with federal policy and law during the Trump administration. In the final two years, cases increased, with 219 cases filed from 2019 until the end of the term.

Building off of two previous reports, from year one and year two of the administration, the new report categorizes cases into five overarching responses to Trump climate deregulation policy. They are:

The first four categories describe “pro” climate protection claims, where, if successful, the suit would strengthen climate regulation or protection. The fifth and final category includes all “con” cases, where, if successful, the suit would bolster climate deregulation and undermine climate protection. The proportion of cases from each category is shown in Figure 1 below.

In addition to the five main categories above, the report further categorizes the cases according to their plaintiffs, defendants, sector, and laws at issue. Some of the takeaways are described here, with more detail and charts available in the report. 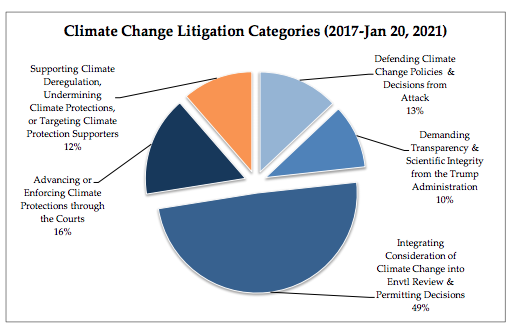 The report includes appendices with case information and links to all 378 cases in the Sabin Center/Arnold & Porter U.S. Climate Change Litigation Database. Further analysis could build on the data to paint an even fuller picture of climate litigation during Trump’s four years in office.

This story was originally published by the Sabin Center for Climate Change Law at Columbia University.

Korey Silverman-Roati is a Climate Law Fellow at the Sabin Center.