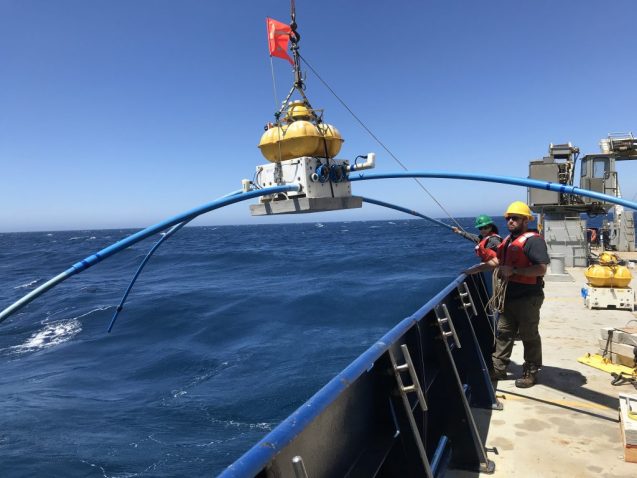 The Hikurangi Margin, located off the east coast of the North Island of New Zealand, is where the Pacific tectonic plate dives underneath the Australian tectonic plate, in what scientists call a subduction zone. This interface of tectonic plates is partly responsible for the more than 15,000 earthquakes the region experiences each year. Most are too small to be noticed, but between 150 and 200 are large enough to be felt. Geological evidence suggests that large earthquakes happened in the southern part of the margin before human record-keeping began. 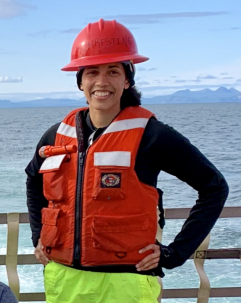 Geophysicists, geologists, and geochemists from throughout the world have been working together to understand why this plate boundary behaves as it does, producing both imperceptible silent earthquakes, but also potentially major ones. A study published today in the journal Nature offers new perspective and possible answers.

Scientists knew that the ocean floor at the northern part of the island, where the plates slide slowly together, generates the small, slow-moving earthquakes called slow slip events—movements that take weeks, sometimes months to complete. But at the southern end of the island, instead of sliding slowly as they do in the northern area, the tectonic plates lock. This locking sets up the conditions for a sudden release of the plates, which can trigger a large earthquake.

“It is really curious and not understood why, in a relatively small geographic area, you would go from lots of small, slow-moving earthquakes to a potential for a really large earthquake,” said marine electromagnetic geophysicist Christine Chesley, a graduate student at Columbia University’s Lamont-Doherty Earth Observatory and lead author on the new paper. “That’s what we’ve been trying to understand, the difference in this margin.”

In December 2018, a research team began a 29-day deep-sea cruise to collect data. Similar to taking an MRI of the Earth, the team employed electromagnetic wave energy to measure how current moves through features in the ocean floor. From these data, the team was able to get a more precise look at the role seamounts, large undersea mountains, play in generating earthquakes. 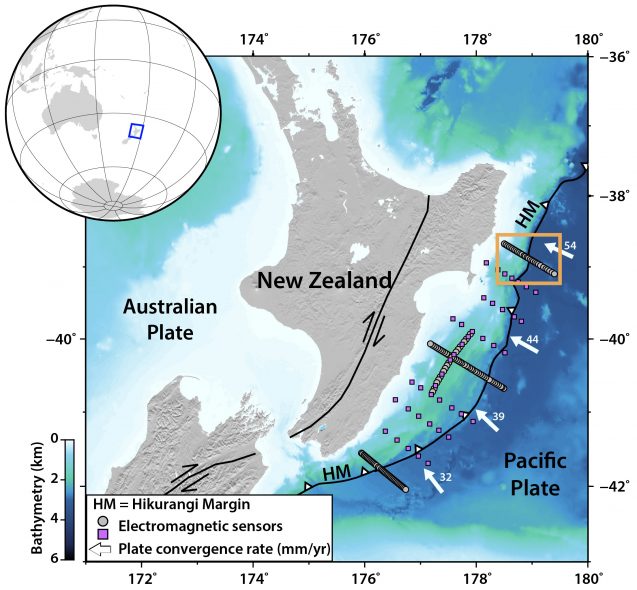 “The northern part of the margin has really large seamounts. It had been unclear what those mountains can do when they subduct (dive down into the deep earth) and how that dynamic affects the interaction between the two plates,” said Chesley.

It turns out, the seamounts hold a lot more water than geophysicists had expected — about three to five times more than typical oceanic crust. The abundant water lubricates the plates where they join, helping to smooth any slippage, and preventing the plates from the sticking that can set up a large earthquake. This helps explain the tendency toward the slow, silent earthquakes at the northern end of the margin.

Using these data, Chesley and her colleagues were also able to closely examine what is happening as a seamount subducts. They discovered an area in the upper plate that seems to be damaged by a subducting seamount. This upper plate zone also seemed to have more water in it.

“That suggests the seamount is breaking up the upper plate, making it weaker, which helps explain the unusual pattern of silent earthquakes there,” said Chesley. The example provides another indication of how seamounts influence tectonic behavior and earthquake hazards.

Conversely, the lack of lubrication and the weakening effects of seamounts may make the southern part of the island more prone to sticking and generating large earthquakes.

Chesley, who is on track to complete her Ph.D. in the fall, hopes that these findings will encourage researchers to consider the way water in these seamounts contributes to seismic behavior as they continue to work to understand slow-moving earthquakes. “The more we study earthquakes, the more it seems water plays a starring role in modulating slip on faults,” said Chesley. “Understanding when and where water is input into the system can only improve natural hazard assessment efforts.”