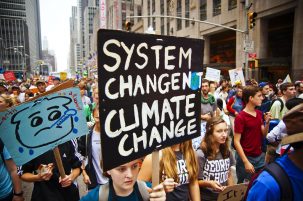 America has a president who understands the climate crisis, and his administration is working hard to address this critical issue. He faces determined opposition by increasingly ideological and irrational Republicans in Congress. He must also satisfy climate activists who demonstrate little concern for political reality and are pushing him beyond political feasibility. President Biden needs to convince West Virginia’s Senator Joe Manchin to take a stand in favor of decarbonization even though he represents a state that was once known for coal. The European Union also appears to be doubling down on decarbonization, even as fossil fuel forces continue to resist proposed climate policies. Despite opposition, a growing consensus behind effective climate policy has arrived. The political and climate environments have converged to create a critical moment for finally addressing the global climate crisis. We cannot afford to allow this opportunity to slip away.

Floods in Germany, heat and fire in the American West, and extreme weather events everywhere make it clear that we are in the midst of an era of rapid climate change and massive climate impacts. The recent collapse of an apartment tower in Florida provides an indication of the damage that nature can inflict on our built environment. Years of delay, arguments over who pays, and political paralysis must be overcome if we are to withstand this gathering storm.

Democrats in the United States Senate are negotiating a multi-year $3.5 trillion budget that includes significant funding for climate subsidies and infrastructure. As Jonathan Weisman, Emily Cochrane and Jim Tankersley reported in the New York Times on July 14:

“President Biden and congressional Democrats vowed on Wednesday to push through a $3.5 trillion budget blueprint to vastly expand social and environmental programs by extending the reach of education and health care, taxing the rich and tackling the warming of the planet. The legislation is far from passage, but top Democrats have agreed on working to include several far-reaching details…Huge investments would go to renewable energy and a transformed electrical system to move the U.S. economy away from oil, natural gas and coal to wind, solar and other renewable sources. The budget blueprint is to include a clean energy standard, which would mandate the production of electricity driven by renewable sources and bolster tax incentives for the purchase of electric cars and trucks.”

My guess is that the clean energy standard won’t survive the budget reconciliation process since a clean energy regulation has little to do with budget revenues or expenditures. Additionally, I believe that command-and-control climate regulation is ill-advised. What makes more sense is for the federal government to subsidize the capital investment in distributed as well as grid-based renewable energy. The federal government could make green energy subsidies contingent upon states meeting clean energy standards. Energy standards as a condition of a grant program might survive Senate reconciliation rules. The best way to decarbonize our energy system is to lower the price of energy. Forcing states to meet renewable standards may create poorly thought-through and expensive retrofits that will enable fossil fuel advocates to argue that decarbonization raises the cost of energy. Subsidizing clean energy lowers its short-term costs and builds political support. Since the long-run cost of renewable energy will go down as technology improves, the best way to decarbonize is to subsidize the infrastructure and research and development needed to modernize our energy system.

Those energy subsidies could very well be permitted to be part of a budget reconciliation process in a way that a pure command-and-control regulation would not be allowed. It might require that funding be added to the $3.5 trillion bill, but it could be a way to convince moderates such as Manchin and Arizona Democrat Krysten Sinema to support a bill that doesn’t ban fossil fuels but provides additional subsidies for renewables.

The Democrats’ very narrow congressional majorities make compromise and unity essential if President Biden is to deliver on his climate agenda. Both Europe and China are in the process of formulating their own aggressive climate plans, and success is not guaranteed in either case. The economic power of those profiting from the fossil-fuel-based economy will not evaporate overnight. To defeat fossil fuel political muscle, those fuels will need to be driven from the marketplace by a lower-priced alternative. Government can provide the incentives needed to enable renewables to advance. The political argument for funding the energy transition is that these incentives will make the energy system more reliable, less polluting and less costly. Until this is demonstrated and proven true, the politics of decarbonization will remain contentious.

The European policy is also based on efforts to raise the cost of carbon. The view largely held by economists is that without increasing the price of carbon, the pace of decarbonization will be too slow. As Steven Erlanger and Somini Sengupta reported in the New York Times last week:

“The detailed proposals from the European Union mark only the start of what promises to be a difficult and bruising two-year negotiation among industry, 27 countries and the European Parliament on how to reach the 55 percent reduction [in greenhouse gas emissions]. But coming before the talks in Glasgow, the proposals represent an effort by the European Union to assert global leadership in what must be a multilateral effort to reduce global emissions sufficiently to avert the worst effects of climate change…At the heart of the European road map is increased prices for carbon. Nearly every sector of the economy would have to pay a price for the emissions it produces, affecting things like the cement used in construction and the fuel used by cruise ships.”

The hope of Europeans is that this price signal will encourage technological innovation and encourage businesses to lower their emissions. My view is that this approach will not speed up decarbonization but delay it. Stakeholders will engage in political and legal battles as industries fight rules rather than focus on technological innovation. A more direct approach is to subsidize those businesses and utilities willing to decarbonize. The technologically advanced energy processes implemented by these organizations will enable them to lower their cost structure and beat the fossil fuel emitters in the marketplace. Investments in capital improvements to decarbonize utilities and businesses will inevitably lead to capital investments that lead to other improvements. Moreover, when engineers have completed their work designing energy innovations, they can turn their expertise to other areas in need of innovation. We saw this with autos and the regulation of safety and pollution: Today’s computer-controlled cars are a far cry from the autos of the 1960s. In sum, I am arguing for a policy approach of positive incentives rather than negative incentives and punishment.

The objective environmental conditions on our planet are deteriorating. The impact of climate change on human settlements, agriculture, and infrastructure is growing. We are running out of time. When I look at the history of technological innovation, it is true that command-and-control regulation does spur the development of new technologies. As I mentioned, we’ve seen that with the impact of fuel mile standards on the modern motor vehicle. But most technological innovation takes place because businesses see a way to make money with a new invention. The auto, refrigerators, TVs, the internet, the cell phone, GPS — all technologies that resulted from public-private partnerships, built around potential profit and enhancements of quality of life. New technologies are adopted when they are cheaper, more reliable and more useful than what they replace: autos and horse-drawn carriages; cell phones and landlines; videotape and streaming video; local mainframes and cloud computing. The examples are endless. Renewable energy is a better technology than fossil fuels. Its source fuel is not finite, it doesn’t require pollution to mine or use, and advances in battery and solar cell technology will eventually drive fossil fuels from the marketplace. The problem is that we have no time for “eventually.” We need to decarbonize now.

Government must play an active, positive role in building the energy transition. If you believe that government played no role in the development of the auto, remember that while Henry Ford built the Model T, government built the roads. Government subsidies and incentives were involved in every technological innovation that Americans now take for granted.

The transition to renewable energy should follow a similar course. Much of Biden’s climate plan involves subsidies and inducements. Even the proposed Climate Corps is a way to create a jobs program to put people to work on decarbonization. If a national clean energy standard somehow makes it through Congress, a new national rule could be helpful if it is accompanied by the resources states need to meet that standard. If the standard doesn’t make it through, the resources may enable many states to exceed the national standard. It is not enough to tell states to meet a clean energy standard. They must be provided with the means to meet that standard.

The environmental catastrophe predicted by climate modelers a generation ago is upon us. Most political leaders around the world know that the moment for action has come. Their children have told them that they must act now. The actions must be crafted in a way that builds political support as widely as possible. Half a loaf is better than none, and entrenched positions on both sides of the debate are unhelpful. The real debate is not between those that believe the climate crisis is here and those who deny it. It is about the best way to quickly develop and implement the changes in energy, industrial and agricultural technologies we need to preserve our planet. It is not enough to set aspirational goals; we need to provide the resources and organizational capacity required to end most use of fossil fuels as fast as possible.