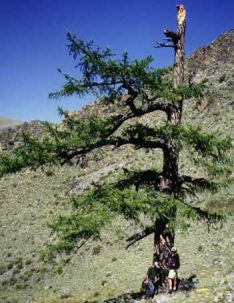 A relatively new way of analyzing tree rings has allowed researchers to reconstruct temperatures in Mongolia since 1269 C.E. The new reconstruction confirms that since the 1990s, summer temperatures are the warmest the region has seen in the past eight centuries.

Central Asia is one of the fastest-warming places on the planet. In just the past 15 years, summer temperatures have warmed 1.59 degrees C, or nearly 3 degrees F — almost three times the global average rate. During the same period, the region has suffered through extreme and extended droughts.

To date, there are only a handful of long-term climate records in central Asia that can help to put these trends into context. Analyzing the rings from trees can tell scientists about temperature and precipitation patterns hundreds or thousands of years in the past, but suitably old trees and logs in this region can be difficult to sample, in part due to their remoteness.

The scarcity of tree ring data in the region makes the new reconstruction all the more important. To create it, Davi and her colleagues analyzed tree ring cores that were originally collected in 1998 and 2005 for a project led by her mentor, Gordon Jacoby, co-founder of the Tree Ring Lab at Lamont. Jacoby had been trying to reconstruct the region’s temperature history using ring widths, but the data wasn’t strong enough, so he set it aside. Before Jacoby died in 2014, Davi asked permission to take over the project.

A map of Mongolia showing the locations of sites that were included in the study (BU, KK, and OZN, represented by triangles). Blue and red dots show weather stations that record temperature. Credit: Davi et al./Geophysical Research Letters 2021

The samples come from several high-elevation forests in western Mongolia. “People think of it as this vast steppe system, but there are some remarkable old forests throughout the country and it’s very pristine,” said Davi. The locations were very remote, she added. “It is quite an expedition to get to these forests.”

Video footage recorded by Gordon Jacoby showing one of the study sites and surrounding vegetation and landscape.

The cores come from a combination of living Siberian larch trees dating back 400 to 500 years, and relict wood — ancient trees that had fallen over but hadn’t decayed, thanks to the cold and dry conditions. “When we find relict wood it’s super exciting because we know we can go back further in time,” said Davi.

She wanted to put the samples to good use, and since the ring-width model hadn’t panned out, the team decided to try a different way of analyzing them: measuring the density of the wood. This is done by taking an extremely thin sliver of the tree core — thinner than a human hair — and shining light through it. More light will penetrate through less dense rings, and less dense rings indicate colder growing conditions. Davi and her team tried this method, but unfortunately, she said, “It’s expensive, it takes a lot of time, and it’s pretty destructive. It would break up the core, and we couldn’t get what we needed.”

Finally, the team turned to a newer method that came into use a few years ago and has shown promising results. Called delta blue intensity, the method looks at how well each ring reflects blue light in its latewood (the darker band that forms later in the growing season) compared to in the lighter early wood. Less dense wood that results from cooler conditions absorbs less blue light.

The stronger results from the delta blue light technique allowed the team to build a model of summer temperatures in the region from 1269 to 2004 C.E. The reconstruction matches up well with data from regional weather stations dating back to the 1950s, as well as cooling events associated with several large-scale volcanic eruptions.

Using the tree ring data from the new study, the chart at right reconstructs mean June-July temperatures in degrees C for western Mongolia between 1178-2004. The following slides explore different historical events and the climatic trends during those periods as reflected in the data.

Use navigation below or swipe/drag to advance slides. Chart controls: click to resize, mousewheel to zoom, click and drag to pan. View large version of this slideshow.

Next: The Rise of the Mongol Empire »

The Rise of the Mongol Empire

Rising in the early 13th century under the ruler Ghengis Khan, the Mongol Empire would become the largest contiguous land empire in history. Tree ring scientists previously found that Mongolia likely experienced a milder, wetter climate during the Empire's initial period of expansion. In the new study, the reconstructed average June-July temperature from 1205-1224 was 0.5 °C (1 °F) warmer than the dataset's mean. During this time, the fertile grasslands of mild, wet summers may have supported increased production of livestock and war horses, literally fueling the Mongols' extraordinary conquest. Read more: Climate and Conquest: How Did Genghis Khan Rise?

Image: Expansion of the Mongol Empire 1206–1294 superimposed on a modern political map of Eurasia. Wikimedia Commons

The Little Ice Age was a period of cooling that occurred from approximately the 15th through the 19th centuries. At different times and places, the climatic effects of the Little Ice Age contributed to periods of social instability that are reflected in the historical record. In East Asia, severe droughts and famine during the 17th century contributed to the collapse of the great Ming dynasty, a successor of the Mongol Empire. The tree ring data at right shows that the interval from 1650-1675 was particularly cold in the study region, averaging nearly 1.5 °C (2.5 °F) cooler than the mean.

Scientists have advanced several possible causes for the Little Ice Age, including decreased solar activity, volcanic eruptions, and fluctuations in the human population. 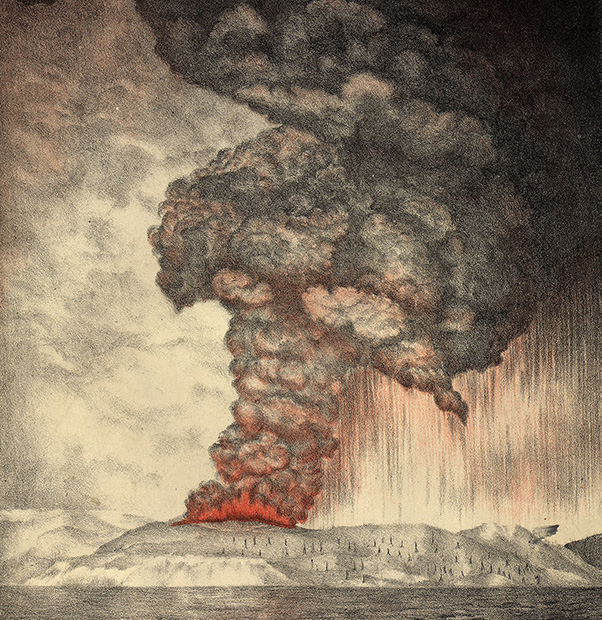 Large volcanic eruptions can affect global climate by emitting huge amounts of ash and sulfur dioxide high into the atmosphere where they block or reflect solar radiation, causing the Earth's surface to cool.

Destroying some 70% of its island and the surrounding archipelago, the eruption of Krakatoa in 1883 was one of the deadliest and most destructive volcanic events in recorded history. In addition to causing global cooling, the atmospheric particles from the eruption produced vivid sunsets throughout the world for many months; a Krakatoa sunset may even be depicted in Edvard Munch's famous painting The Scream. The eruption's signature is also visible in the Mongolian tree ring data, which shows a steep drop in temperature in 1884.

Image: An 1888 lithograph of the eruption of Krakatoa. Wikimedia Commons

Mongolia: Past, Present and Future 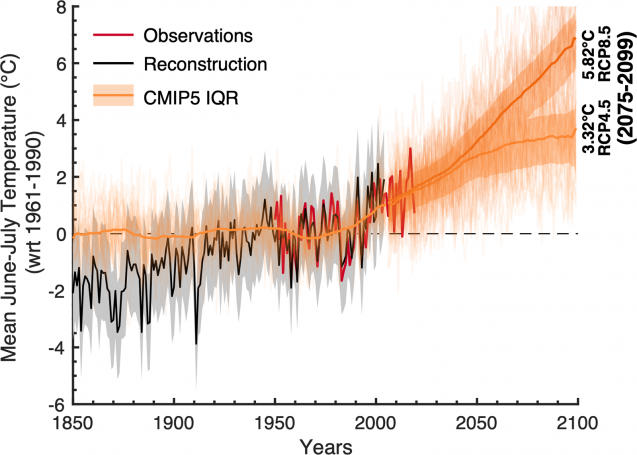 Both the tree ring data (blue) and observed temperatures (black) confirm that this region is one of the fastest-warming places on the planet. In just the past 15 years, summer temperatures have warmed 1.6 °C (3 °F) — almost three times the global average rate. This warming has already begun to impact the environment and people of Mongolia: severe winters and droughts in the 2000s resulted in major livestock die-offs and the migration of many nomadic herders to Ulaanbaatar, the capital city.

Projections indicate the region is expected to warm by another 3 to 6 °C (5.4 to 10.8 °F) by the end of the century. This continued warming may exacerbate the desertification, water stress and harsh winter storms that have characterized recent years, reshaping the land and people of Mongolia once again.

For Davi, publishing these findings feels personally meaningful. “Gordon Jacoby was my PhD advisor, mentor, and friend,” she said. “We had a lot of adventures doing fieldwork together. Bringing closure to some of the research that he started definitely feels good.”

The findings support the growing potential of the delta blue intensity method to improve our understanding of past climates, said Davi. They also put central Asia’s warming into context, and enhance projections, under which the region is expected to warm by another 3 to 6 degrees C (5.4 to 10.8 F) by the end of the century. The rapid warming is already harming fragile ecosystems and causing devastating livestock losses for pastoralists, who traditionally have formed the backbone of the Mongolian economy. 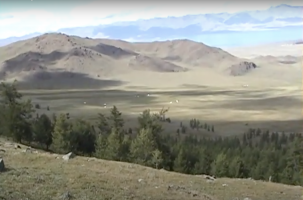 One of the forests sampled in the study. Source: Video by Gordon Jacoby

“What does it mean for livelihoods in Mongolia?” asks Davi. “This is a largely agrarian culture. Some people live in cities, but there are also people who are nomadic herders who have been living the same way for thousands of years. This reconstruction certainly adds context to the warming of the past several decades, and to global climate models showing what it could look like in the future.”

The paper recommends continued investment in infrastructure and climate resilience programs such as index-based livestock insurance to help communities cope with the changing conditions.

Coauthors on the new study include Mukund Rao, Robert Wilson, Laia Andreu-Hayles, Rose Oelkers, Rosanne D’Arrigo, ‪Brendan Buckley and Caroline Leland of the Lamont-Doherty Tree Ring Lab; Baatarbileg Nachin and Byambagerel Suran of the National University of Mongolia; and Neil Pederson of Harvard University. The study was funded by a grant from the U.S. National Science Foundation.