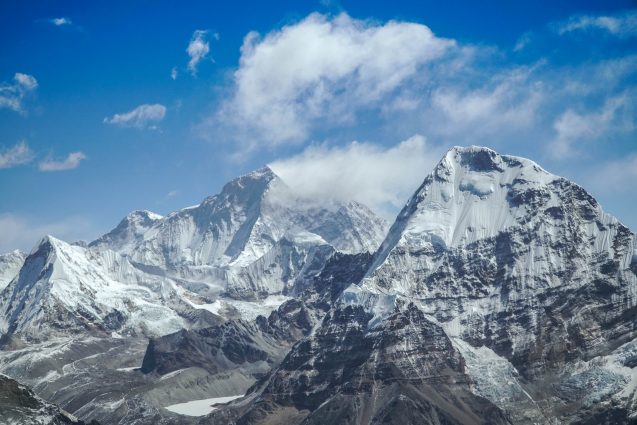 A new study bolsters the idea that the uplift of the Himalayas and Andes that began tens of millions of years ago helped trigger the ice ages that followed. Here, mountains in Nepal. (Bisesh Gurung/unsplash)

Silicate minerals are the major components of most rocks. When these minerals on the Earth’s surface come into contact with water, they partially dissolve as they react with carbon dioxide in the water. This dissolved material is then transported via rivers to the ocean, where it is ultimately used by organisms to make marine carbonates such as limestone. In this way, carbon dioxide is removed from the atmosphere and turned into rock. The process is called silicate weathering—a natural example of carbon sequestration. In the modern world, the rate of this process increases along with the rate of erosion, the breaking down of rock into ever smaller pieces by processes such as water flow by streams and rivers, freeze-thaw cycles or landslides.

Three decades ago at Columbia University’s Lamont-Doherty Earth Observatory, one of us, Maureen Raymo, together with colleagues William F. Ruddiman and Philip N. Froelich, proposed that enhanced erosion and weathering of rocks, driven by the uplift of the Himalayas and Andes, caused a decline in atmospheric carbon dioxide. This resulted in the global cooling observed over the past 40 million years, and ultimately, to repeated ice ages. This idea is known as the Uplift-Weathering Hypothesis.

Multiple geological and geochemical records support this idea. These include records tracing changes in carbon dioxide dissolved in the oceans; the timing of when certain rocks cooled and solidified; and rates of sedimentation on the ocean floor.

Isotopes of several elements including strontium, osmium and lithium are also consistent with a global acceleration of continental erosion and weathering during this time. They therefore provide support for the Uplift-Weathering Hypothesis.

However, isotopes of the element beryllium have stood out as an important exception. Rocks include only beryllium-9 (it has 4 protons and 5 neutrons). In the Earth’s upper atmosphere, high-energy cosmic particles from the Sun collide with oxygen and nitrogen to create beryllium-10 (with 4 protons and 6 neutrons), which falls to the Earth’s surface. If erosion and weathering increases, more beryllium-9 would come down rivers, while the rate of beryllium-10 creation would stay the same, so we might expect the ratio of beryllium-9/beryllium-10 in the oceans to increase. Since it did not, some scientists have interpreted this to indicate that continental erosion-weathering rates were stable over the last 12 million years, which would falsify the Uplift-Weathering Hypothesis.

In a study just published in the Proceedings of the National Academy of Sciences, we have developed a new model of the beryllium cycle that reinterprets the isotope record of the past. The model demonstrates that under increasing continental erosion and weathering, increases in beryllium-9 flowing through rivers to the ocean would be counterbalanced by chemical scavenging processes along ocean coasts that would remove the extra beryllium-9. The predicted result would be a constant beryllium-9/beryllium-10 isotope ratio in seawater, as observed. Similar processes do not take place with the other isotopes, such as strontium and lithium. This explains why beryllium isotope records are consistent with increased erosion and weathering of the continental crust during the late Cenozoic, starting some 34 million years ago, and resolves the contradiction between the beryllium records and the other weathering proxies.

This study also provides important information on how our planet’s carbon cycle works. Given the many lines of evidence indicating that increased erosion and weathering occurred over the last 12 million years, one must conclude that geologic processes other than silicate weathering must have prevented runaway cooling of the planet.  A number of mechanisms have been proposed to compensate for the removal of carbon dioxide by erosion and weathering, and thus maintaining our planet’s habitability.

Our challenge as geoscientists is to reach a deeper understanding of the complexities of the Earth’s carbon cycle, especially the vast understudied reservoirs of carbon that are exchanged between the planet’s oceanic crust and seawater.

Shilei Li is a researcher at China’s Nanjing University; Steven L. Goldstein is a professor at Lamont-Doherty Earth Observatory; Maureen E. Raymo is the director of Lamont-Doherty and co-founding dean of the Columbia Climate School. Raymo together with Goldstein.advised Shilei when he studied at Lamont as a graduate student.