Nine glaciers in the remote Getz Region of the West Antarctic ice sheet have new names. On October 31, the proposal to rename glaciers after cities where consequential climate treaties have been signed was accepted by the Antarctic Place Naming Commission.

The Getz Region of the Antarctic ice sheet. Photo courtesy of: Pierre Dutrieux

Antarctic ice sheet researcher Heather Selley, from the University of Leeds, brought the proposal to the committee. “We saw the opportunity to mark 42 years of collaboration on international science and climate policy decision-making,” said Selley. “Having studied climate change for the best part of a decade on a personal level it feels extremely special to honor the scientific community who have put in an outstanding effort measuring present-day impacts of climate change and its predicted future evolution.”

The new names are Geneva, Rio, Berlin, Kyoto, Bali, Stockholm, Paris and, for the northernmost glacier in the sequence, Glasgow. Selley hopes that naming a glacier for the current climate talks will highlight the importance for what is at stake. “I think we need a stark reminder of what we are fighting for,” said Selley. “I hope it sends a strong message of a call for action. It will be up to the decisions and commitments made at COP26 whether the legacy of this glacier and this generation will be the moment humans stepped up.” 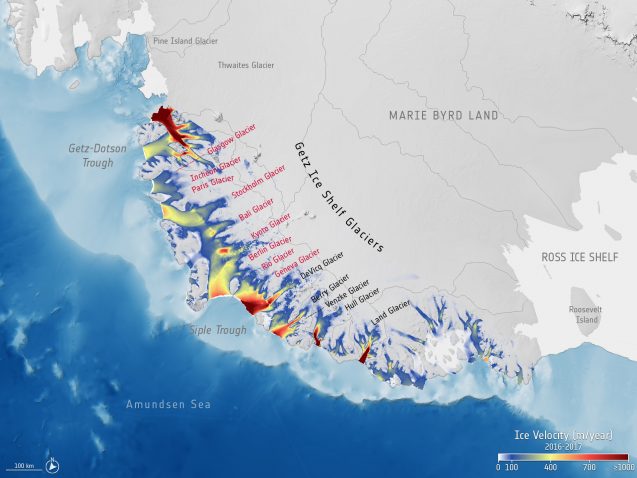 The Antarctic ice sheet is the largest single mass of ice on Earth. Over the last 20 years it has been losing an average of 149 billion metric tons of ice per year and is a major contributor to sea level rise. The ice sheet is in peril, but Selley is optimistic that COP26 might be the turning point. “My hope is that ambitious concrete actions, timeframes and commitments will be made and, more importantly, honored,” she said. “Glasgow glacier highlights that now is the time to decide what we want the legacy of this generation to be.”

Science Scramble
Subscribe
Login
0 Comments
Inline Feedbacks
View all comments
wpDiscuz
0
0
Would love your thoughts, please comment.x
()
x
| Reply
This website uses cookies as well as similar tools and technologies to understand visitors' experiences. By continuing to use this website, you consent to Columbia University's usage of cookies and similar technologies, in accordance with the Columbia University Website Cookie Notice.Close