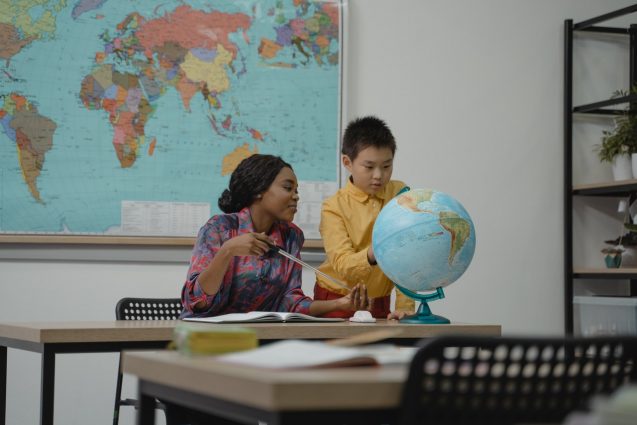 “What are you studying at Columbia?” my friend asks as she helps me pack for my move from North Dakota to New York City. “Climate and Society,” I promptly respond.

“What does that mean? What even is climate change and why is it political?” My friend, who is a sixth-grade middle school teacher in Bismarck, waits for my answer. She was born and raised in my home state of North Dakota and has finished four years of college at North Dakota State University. Yet, she sincerely did not understand what climate change was or why I would dedicate a year of my life studying it. She only associates the words climate change as a point of contention in contemporary politics.

I found this shocking since she is entrusted with educating the youth who will inherit an increasingly inhospitable planet.

As Pope Francis asserted, “Human-induced climate change is a scientific reality, and its decisive mitigation is a moral and religious imperative for humanity.” He also posited, “We are not faced with two separate crises, one environmental and the other social, but rather one complex crisis which is both social and environmental.”

The words of a prominent moral leader make it clear; climate change is a reality and immediate action is called for.

And yet, my friend’s ignorance of the situation we are facing and that her students are subject to is echoed throughout the country, evident in the limited climate change education taught by the more than 400,000 middle-and high-school science teachers throughout the United States.

In 2016, the journal Science published the first peer-reviewed national survey of science teachers which investigated how the debate around anthropogenic climate change affects curricula. It discovered most middle- and high-school teachers incorporate only an hour or two of instruction about climate change over the course of an entire academic year. Thirty percent of teachers devoted less than an hour.

Considering America’s youth are most at risk of suffering from the mounting repercussions of climate change, they deserve to learn the science free from the politicking that has halted climate action for decades.

Through national climate education, there is hope for collaboration across political parties and a resurgence of trust in science. Recent studies by the Yale Program on Climate Change Communication reveal younger generations of Republicans are more likely than their older counterparts to support climate activists, and are also more willing to join a campaign to convince elected officials to take action to reduce global warming.

Climate science must be mandated nationally as a standardized and testable curriculum for schools to implement, with clear guidelines and resources for instructors to teach it adequately. Teachers also need continued education on climate change through workshops and conferences, as well as up-to-date resources and easily accessible studies on the subject.

Some initiatives are already starting to roll out in certain areas. The Next Generation Science Standards — developed by state governments in conjunction with the National Research Council, the National Science Teachers Association, and the American Association for the Advancement of Science — incorporate climate science into the K-12 curriculum and has been adopted by 20 states within the US. The Center for Research on Educational Equity, Assessment & Teaching Excellence at UC San Diego has developed a pilot program, Creating Climate Champions, a collaborative effort among campus and community partners to develop lesson plans, in-class activities, and projects to aid San Diego county K-12 teachers. The curriculum is grounded in evidence-based climate science and Indigenous knowledge to empower students to act.

But, promising though these efforts are, they are manifestly inadequate given the scale of the task. These efforts must be ramped up on the national stage. We can look to Italy as a prime example. Since September 2020, teachers for every grade are mandated to teach a minimum of 33 hours on climate change and environmental sustainability, an initiative led by Italian Education Minister Lorenzo Fioramonti.

In the United States, political actors must follow suit and mandate climate science curriculum for schoolchildren across the nation, just as other countries like Finland and Mexico have done or are working to do.

In 2021, the Yale Program on Climate Change Communication reported that 78 percent of registered voters support schools teaching children about the causes, consequences, and potential solutions to global warming. With public support mounting for climate education, it is time we demand action from the national government. Students and teachers alike need to be properly educated on climate science.

Instead of determining the future state of the planet for our youth, let’s educate them with the accurate information they need to understand climate change and, when it’s their turn, to take the steps required to ensure a livable future for all.

Annika Larson is a student in the MA in Climate and Society program at the Columbia Climate School.

Climate change education is a hot potato. It’s not by accident that people, including teachers. don’t really get the scientific consensus – fossil fuel companies have been blasting denial and misinformation about “doubt” for decades. Including climate change “officially” in school curriculum would be a policy decision, and require taking a position on what is still not acknowledged as a crisis but merely referred to as an “issue” (a category of things teachers can invite their students to debate, to “consider all sides” without any responsibility for teaching students particular facts). The “science” of climate change, like the language of the UN COP gatherings designed to get countries of the world to set targets to reduce their greenhouse gas emissions, avoids any mention of “what causes climate change.” The narrative is consistently general. It refers to “gases,” or “emissions” or”pollutants,” that are “human-caused” or “anthropogenic” to avoid mentioning where the come from, and what are the key sources. The latest IPCC Science AR6 (August 2021) “full report” states that more than 80% of the last decade of warming is due to the burning of fossil fuels. Yet the phrase “fossil fuels” does not appear in the Summary for Policymakers version of the report, nor do the terms “economy,” “sectors,” “industry,” “shipping,” “aviation,” “agriculture”….the whole document (like curriculum, where it exists) refers only to “gases” and “emissions” that are “human-caused.” Countries cannot make policy about “humans” and “gases.” Nor can children understand what causes climate change if they are taught ‘we are all responsible” for being the humans who put those gases into our atmosphere. BP hired ad agency Ogivly and Mather to come up with the concept of “your carbon footprint” to fob responsibility onto the public, and more recently onto kids, with their incursions into education. Proposals for “climate change education” are now entirely focused on student “action,” which is designed to relieve their guilt about warming the planet, and keep them busy but not necessarily actually learning about what needs to happen to reduce CO2 and other gases in the atmosphere. You won’t hear anything about keeping below 1.5C (already likely impossible, as the world is not doing nearly enough) or 2C, because the principal requirement to do that would be to cut fossil fuel use dramatically. No one wants to tell young students this most critical fact, which might provide some kind of a metric by which they could actually measure the usefulness of any “actions” they might undertake – how much fossil fuel have you replaced, captured, avoided? Here in Canada, we’ve come across four blatant examples of fossil fuel companies directly funding educational groups and resources for “climate change education” for school kids. They say (now), “Yes, there’s a scientific consensus that the current warming is human-caused.” They then suggest moving “beyond knowledge” (which clearly, they claim, hasn’t worked, as even the people who worry about climate change aren’t doing anything about it, including all those kids) and jumping into action. Nice side-step. Their materials NEVER mention fossil fuels, or rarely the word climate “mitigation” which might make students ask what it means, and what it would take – and point them straight to the notion of “getting off fossil fuels.” Student climate action, and sometimes climate justice actions (best described as “personal,” or “school level” or possibly “community-related, but “local – where you are”) are good places to get “carbon-footprint”-guilted students to worry about their own contributions to this problem, and ignore the fossil fuel companies and corporations that wish to avoid regulation, and the governments who fail to regulate them (Greta reminds the kids of this particular problem, fortunately, and says “follow the science”). Climate scientist Michael Mann has written a whole book about this clever effort to deflect attention from the principal players in the climate crisis to the public (The New Climate Wars – 2021). All to say, climate science needs to be honest and speak clearly. It must point to the actual causes of increasing CO2 in the atmosphere, the fuels and the people and entities and processes that burn them (not the “gases” and “emissions” and “pollutants” which are consequences of that burning). It must point to the need to move urgently ad swiftly away from powering the global economy with fossil fuels, and towards clean, sustainable alternatives. It must point to the need for better government policy on climate. It can teach about the opportunities for designing change Fossil fuel companies are working to deceive the public, control the language of climate change diplomacy – and now gut the language of climate education. putting the futures of today’s students at risk. Education systems cannot allow corporate interests to control the language they use to confuse rather than enlighten a generation to whom we owe the truth. The students’ time to act – act with actual understanding – is now short. (Note: it’s good to do word searches on teaching resources to see who funded them, and whether or not they mention fossil fuels or mitigation. The oil companies — and, here in Canada, a principal bank that funds them — are investing in this new field with enthusiasm.)