Over the course of more than 25 years, atmospheric and ocean scientist Lisa Goddard was at the forefront of developing methods to forecast regional climate trends from several weeks to several years out. She worked at understanding the interplay of short-term natural variability with long-term climate change. During  decades at Columbia University’s International Research Institute for Climate and Society (IRI), which she eventually directed, she worked with governments and nonprofits in dozens of developing countries to apply these increasingly sophisticated forecasts to practical decisions in agriculture, public health, emergency planning and energy production. Her work extended to bolstering the climate expertise of scientists in many countries, and their ability to advise government authorities.

Goddard died on Jan. 13 in Mt. Kisco, N.Y. The cause was metastatic breast cancer, said her family. She was 55.

“Her contributions to our understanding of climate were important, but her commitment to ensuring that climate information was accessible and meaningful to decision makers across the globe was game-changing,” said Alex Halliday, dean of the Columbia Climate School, of which IRI is a part. 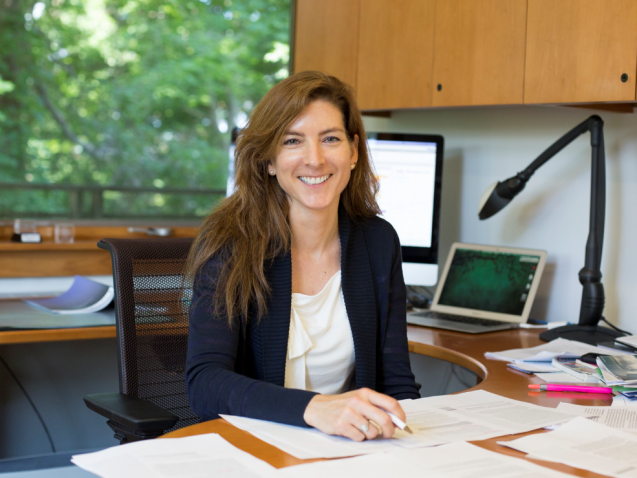 Lisa Goddard in her office at the International Research Institute for Climate and Society, 2013. (Francesco Fiondella/IRI)

Lisa Marie Goddard was born Sept. 23, 1966, in Sacramento, Calif., the eldest of two children. Her father, Glenn Goddard, was a manager for the state of California’s labor department. Her mother, the former Marie Strickland, was a grade-school teacher.

The family moved several times in northern California, and Goddard ended up going to high school in the small city of Davis. Deeply into cooking, she considered going to culinary school. However, she was also an avid puzzle solver, and this interest won out; she decided to pursue the puzzles of physics, said her husband, David Cooperberg.

She was admitted to the University of California, Berkeley in 1984, and received her undergraduate degree in 1988. In pondering her next steps, she decided not to pursue abstract theoretical work. “At that time, in the late 1980s, there were just starting to be stories in the news about the ozone hole and global warming,” she later said. “I thought: This is an exciting way to apply my physics knowledge. This is something I want to learn more about, and maybe help people.”

She went on to Ph.D studies under Princeton University climate scientist George Philander, who at the time was leading studies aimed at studying the then poorly understood weather pattern known as El Niño. Philander found that it had an opposite state, which he dubbed La Niña. The combined phenomena are now known to be an irregular 2- to 7-year repeating oscillation that alternately warms and cools the surface of the tropical Pacific Ocean. This in turn powerfully affects rainfall patterns over much of Asia and the Americas, along with crop yields and the risks of floods, droughts and heat waves. Goddard became part of the effort to disentangle its workings. She wrote her thesis on the interdependent ocean and air dynamics driving the El Niño-La Niña cycles, and went on to become a widely recognized expert on the subject.

When Goddard started out, women in the earth sciences were vanishingly rare; she was the only female in her year’s cohort at Princeton. She later said that she embraced the difference; being a rarity bestowed an advantage, because as long as she asserted herself, professors and others tended to remember her more than they did her average male colleagues.

In 1995, after receiving her doctorate, she took up a series of positions at California’s Scripps Institution of Oceanography as part of the newly created IRI. Initially a collaboration between the U.S. National Oceanic and Atmospheric Administration and Columbia with an outpost at Scripps, it became the world’s first international institute to try filling the yawning gap between daily weather predictions and long-term climate-change research. The aim was to create near- and medium-term climate forecasts that could be applied to social and economic issues.

At Scripps, Goddard and the handful of others she worked with were based in a little white cottage overlooking the Pacific Ocean. Having a keen sense of fun and love of the outdoors, she got the side benefit there of spending occasional lunch breaks surfing.

In 2000, Goddard moved to IRI’s main headquarters on the suburban campus of Columbia’s Lamont-Doherty Earth Observatory in Palisades, N.Y. There, colleagues Stephen Zebiak and Mark Cane had already come up with a successful working model for predicting the comings and goings of El Niño and La Niña. Goddard worked on refining the model, and on developing models to project other regional weather trends on scales of weeks, months or years. Scientists at Lamont-Doherty itself mostly investigated longer-term climate change over centuries and millennia, and Goddard was able to cooperate with them to incorporate the larger picture into her work. In all, she authored or coauthored about 100 published scientific papers. 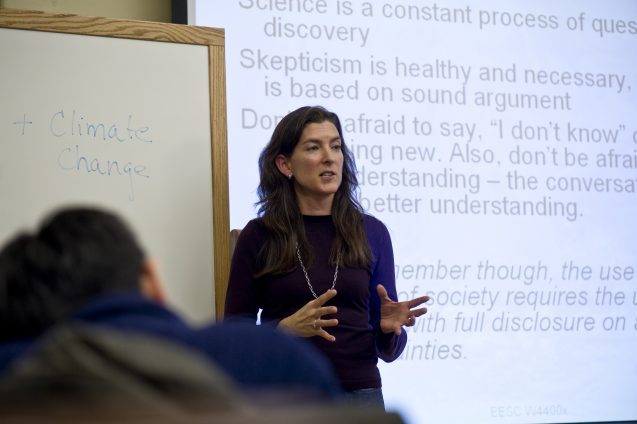 The institute focused on providing information and training mainly to developing countries that had scant resources in meteorology and climate. Goddard traveled widely in Africa, Asia and South America to do research and help set up programs to train and otherwise aid scientists. The forecasts were then applied to questions like what crops to plant next season; whether relief agencies should pre-position funding to deal with potential floods, droughts or heat waves; and the prospects that a proposed dam would get enough water supply to provide hydroelectricity or irrigation.

In the early 2000s, Goddard helped design Columbia’s MA in Climate and Society program. Now offered by the Columbia Climate School, the interdisciplinary degree is aimed at turning out graduates who can apply training in both physical and social sciences to real-world problems. For many years, she taught the foundational course in the dynamics of climate variability and change, often to students with little previous grounding in the physical sciences. Many of the program’s hundreds of graduates have gone on to influential positions in journalism, government, nonprofits and private industry. In 2007, she founded the Postdocs Applying Climate Expertise (PACE) program, a national effort to link early-career Ph.D climate scientists to positions within decision-making institutions worldwide. She continued to chair the program in recent years.

In 2012, Goddard was appointed director of IRI. She faced an immediate crisis: the institute’s sole financial supporter, the National Oceanic and Atmospheric Administration, had withdrawn its funding to focus on other priorities. With the help of colleagues, Goddard quickly rallied the staff, created an alternate plan and rescued the institute by building up a diverse set of backers, including the World Bank, the World Food Program, the U.S. Agency for International Development, and the governments of various countries, from Uruguay to India. 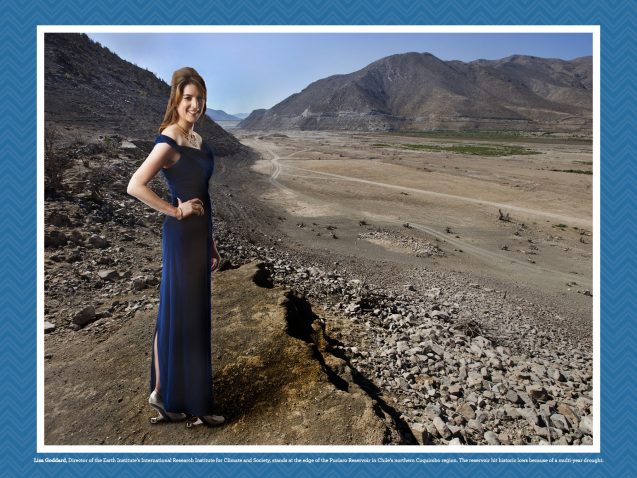 Under Goddard’s leadership, IRI went on to collaborate with many global and regional institutions, including the World Health Organization and the International Federation of Red Cross and Red Crescent Societies. Its scientists worked on diverse issues, including ways for coffee growers to adapt to varying climate; rising malaria risk in Ethiopia’s highlands due to long-term climbing temperatures; rain forecasts aimed at judging the risk of mudslides following a volcanic eruption in Guatemala; and affordable ways to insure the crops of small farmers using climate data instead of traditional individual claims.

In 2017, Goddard and colleagues led the launch of a major effort with the newly formed Columbia World Projects to bolster food security in six populous countries that are particularly vulnerable to both natural climate variability and long-term climate change: Ethiopia, Senegal, Colombia, Guatemala, Bangladesh and Vietnam. Together, those nations comprise nearly 500 million people who face recurring climate-related threats to their food security and economies. The program, Adapting Agriculture Today, for Tomorrow, is still in progress.

Goddard served on a number of influential national and international advisory bodies. From 2009 to 2017, she was a member of the U.S. National Academy of Sciences Board of Atmospheric Science and Climate. From 2013 to 2015, she co-chaired the scientific steering group of the international Climate and Ocean Variability, Predictability and Change organization.

Given the technical nature of her climate-modeling work, Goddard looked for ways to communicate with the wider public. One year, some of her staff came up with the idea of a pictorial “Climate Models” calendar, which instead of featuring scientific charts or maps, would picture individual climate scientists modeling high fashions and striking bold poses. Goddard readily agreed to be “Dr. May 2014,” wearing an elegant floor-length gown in front of a photo-shopped image of a Chilean reservoir ravaged by drought.

With the effects of human-influenced climate change becoming evident in recent years, Goddard spoke often of the need to help affected communities adapt to increasingly extreme weather. “We have variability in the climate system naturally. We’ve had it since the climate system has existed, and it will continue to go on,” she said in a 2018 video. “But now we have manmade climate change, and so that’s changing some of the thresholds.”

Goddard stepped down as IRI director in late 2020 to resume her role as a senior research scientist. She retired in September 2021.

She is survived by her mother; her sister, Kristina Zimmerman; her husband; and her sons Samuel and Matthew Cooperberg.

See a detailed tribute from the Climate & Society Class of 2020

Thank you for this beautiful tribute to my dear friend. She was brilliant, a trailblazer, a role model, and a wonderful friend. The world is dimmer without her here.