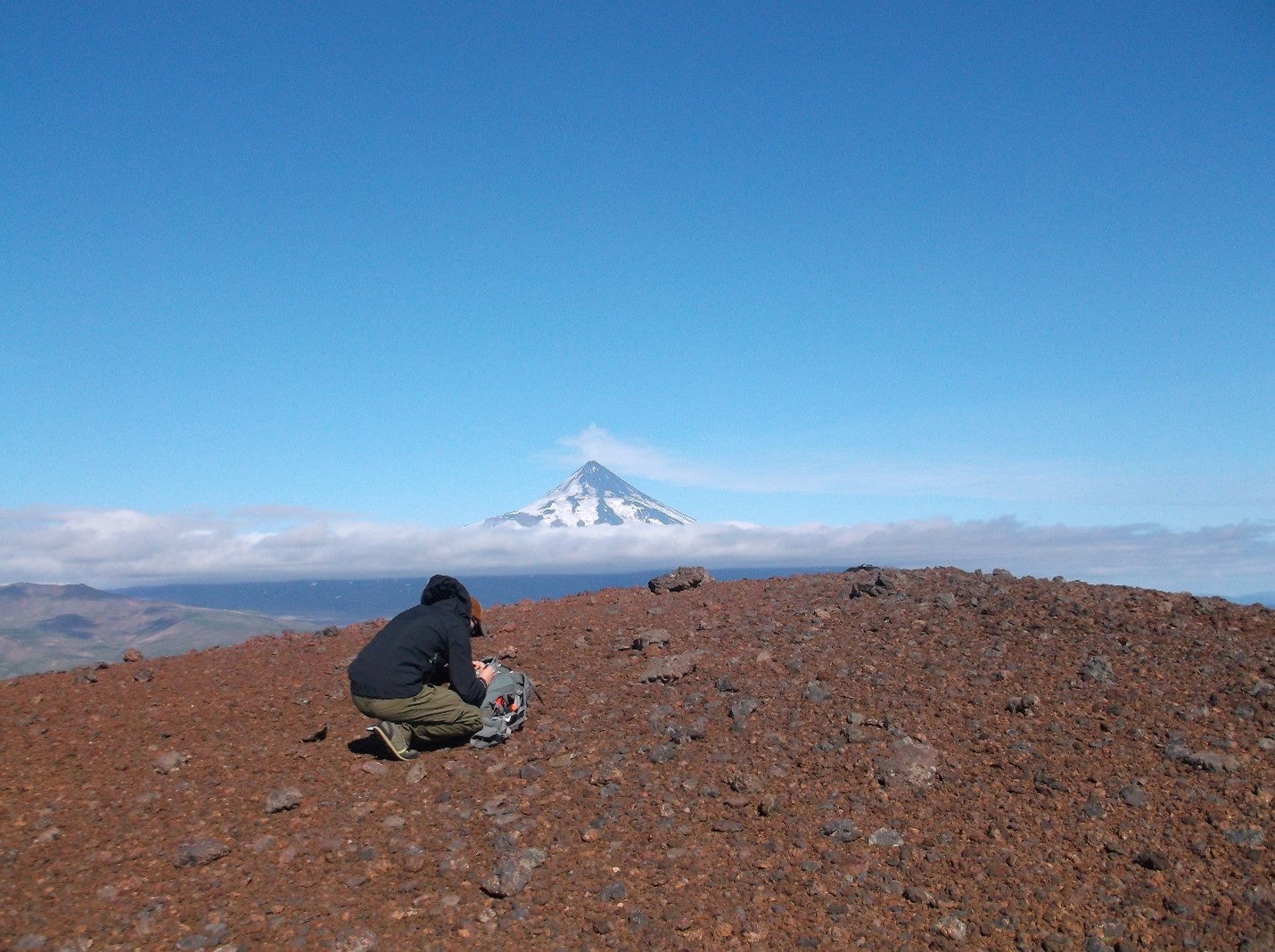 Around the world, 40 to 50 volcanoes are currently erupting or in states of unrest, putting hundreds of millions of people risk. Yet, reliable eruption forecasts have long eluded scientists, largely because they do not fully understand why magma starts or stops moving below the surface over weeks, months or years, before it finally erupts. The results of a new study may bring them one step closer.

The study finds that for the world’s most common type of volcano, it is the water content of magma that controls temporary storage depth; the more water, the greater the depth. The study challenges the prevailing theory that magma stops rising when its buoyancy equals that of surrounding rock. Deeper stalling might sound like good news, but that does not seem to reduce the chances of an eruption, scientists believe. And, water is the main driver behind explosive eruptions, so when something does finally let loose in a so-called “wet” magma, the results can be extremely violent.

“This study connects the depth at which magma is stored to water, which is significant because water largely initiates and fuels eruptions,” said lead author Dan Rasmussen, who did most of the research as a Ph.D. candidate at Columbia University’s Lamont-Doherty Earth Observatory.

In recent years, scientists have used geophysical measurements to figure out where magma bodies are situated under many volcanoes; the bodies range anywhere from 20 kilometers down to practically at the surface.  “We already knew where magma gets stored—the last resting place where it gathers strength before it erupts,” said Lamont-Doherty volcanologist Terry Plank, a coauthor of the paper. “We think of it as stalling, not stopping. Now we know what the conditions are before an eruption.”

The research began in 2015, when Plank suggested that Rasmussen pursue the still-open question of why storage depth varies from one volcano to the next. The research focused on a particular geological setting: so-called arc volcanoes, which are situated at the intersections of converging tectonic plates. Arc volcanoes are the most numerous type on the planet, making them the most obvious target for improving forecasting capacities. With storage depths that range from 3 to 6 kilometers down, they comprise the entire “Ring of Fire” encircling the Pacific Plate, from Alaska’s Aleutian Islands to the South Pacific.

Along with a team that included study coauthor Diana Roman of the Carnegie Institution for Science, Plank and Rasmussen collected ash erupted from eight volcanoes in Alaska’s remote Aleutians. Using ships and helicopters to get around, they encountered rough seas, rugged terrain and, on the island of Unimak, the threat of giant brown bears.

Ash was the primary target because it can contain green crystals made of olivine, each with a diameter of about 1 millimeter. Underground, olivine crystals sometimes trap tiny bits of magma when they form. After an eruption sends the crystals to the surface, the magma inside them cools and becomes glass. By analyzing the chemical compositions of these minuscule magma chunks, the researchers estimated the magma’s water content. 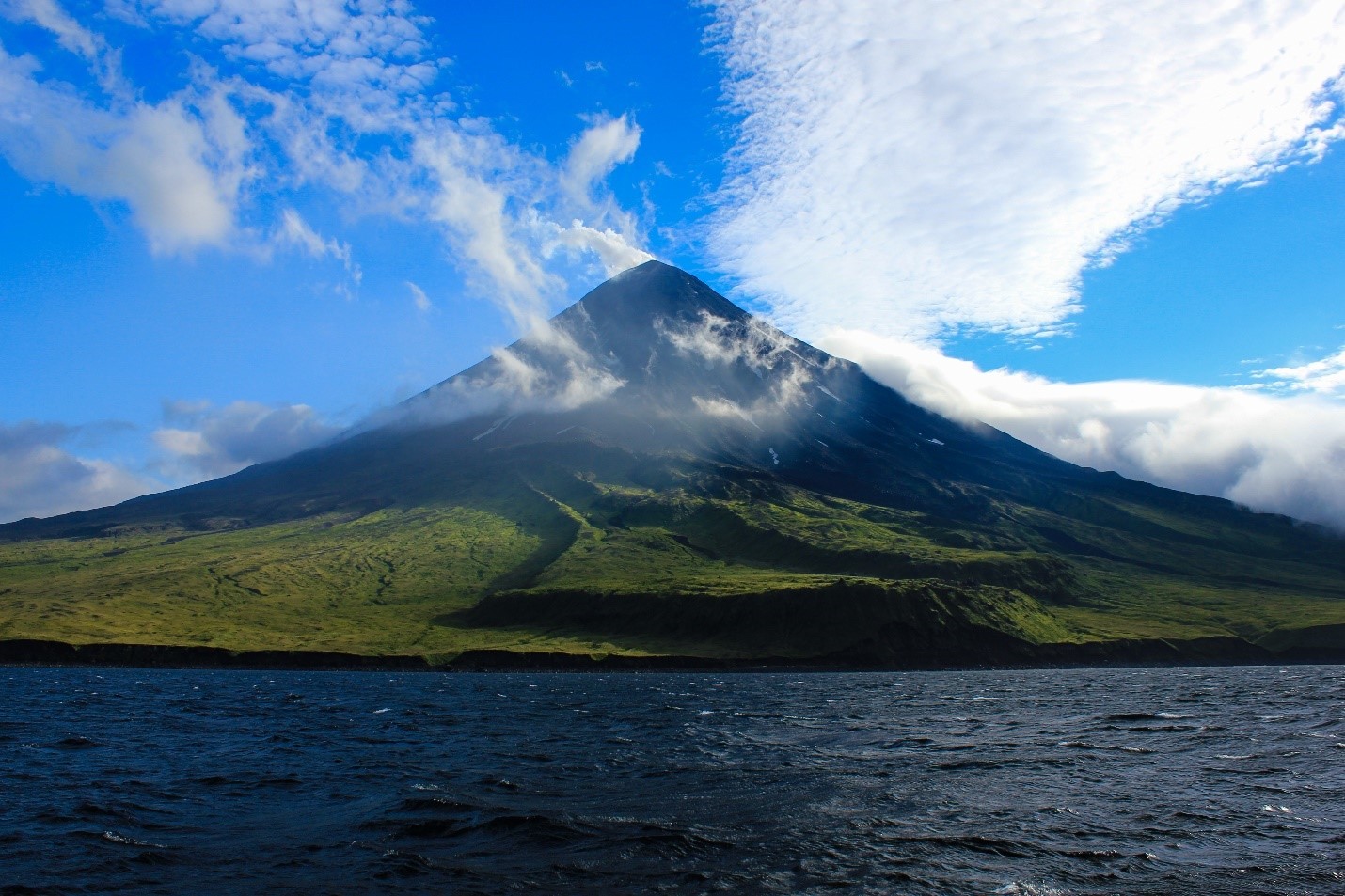 The Aleutian Islands’ Cleveland Volcano, one of the most active in the United States, and one subject of the study. (Daniel Rasmussen/Lamont-Doherty Earth Observatory)

After estimating water content from six of the Aleutian volcanoes, the team combined those data with other estimates of magmatic water content taken from the scientific literature, for a list spanning 62 volcanoes. They supplemented this with data from more than 100 other volcanoes around the world.

Rasmussen, who is now a postdoctoral researcher at the Smithsonian Institution’s National Museum of Natural History, said the database of the Smithsonian’s Global Volcanism Program “was key in compiling these lists because it’s a really good resource for eruption history, and we only wanted to consider volcanoes that had recently erupted.” The team focused on recent eruptions because magma reservoirs do not appear to move a lot following an eruption. Thus, any estimates of depth or water content that were made using recently erupted material have the highest likelihood of accurately reflecting the current state of the volcano’s magma reservoir.

The team finally plotted the estimated magma storage depths for 28 volcanoes around the world against their respective estimated magmatic water contents. The results were strikingly clear: Magmas that contain more water tend to be stored deeper in the earth’s crust. The team went on to show that water content is not just correlated to storage depth, but responsible for it. They showed this by identifying chemical tracers associated with the formation of water-containing magmas in the earth’s mantle, which lies below the crust.

As for how water content might determine magma storage depth, the authors argue that it has to do with a process known as degassing, in which the water dissolved in magma forms gas bubbles as it rises through the earth’s crust, and the pressure on the magma decreases—similar to what happens when you slowly unscrew the cap of a seltzer bottle. When liquid magma begins to degas, it forms crystals and becomes more viscous—that is, less runny. The researchers suggest this thickening causes the magma to slow and stall.

Plank said that this makes the magma less like, say, beer, and more like toothpaste. But now the newly formed bubbles are trapped in this thickened goo, and trying to expand amid the pressure. This gives the mass all the more explosive potential, should something happen to relieve the pressure and let everything out.

But exactly what that something, or things, might be is not clear, said Plank. The authors note that the systems they studied are considered “eruptible”—that they “have clearly experienced viscous stalling, not viscous death, consistent with non-eruptive episodes of stalled intrusions that are commonly observed years to decades before many eruptions.” In other words, the volcanoes are ready to erupt. But the final trigger or triggers, and how they might be detected, are still largely mysterious. “We know what we found, but we’re not quite sure what all the implications are,” admitted Plank.

The evidence that water content controls magma storage depth overturns the most widely accepted explanation in the field today, which contends that magma rises through cracks in the earth’s crust under pressure because the molten rock is more buoyant than the surrounding solid crust. It then settles at its storage depth because it reaches what is called neutral buoyancy, the point at which magma is no more buoyant than its surroundings.

The project is related to a wider ongoing Lamont-Doherty effort in the Aleutians to plant sophisticated suites of instruments on two highly active volcanoes to document in detail any precursors to eruptions. Plank and others hope that research will lead to the development of better forecast methods, and inexpensive arrays that can be used to monitor active volcanoes around the world, many of which are poorly monitored, if they are monitored at all.

Rasmussen said the next step is to see if these findings hold for volcanoes in other geologic settings. These include so-called hot-spot volcanoes, such as those in the Hawaiian Islands, and rift volcanoes, such as those in East Africa. Beyond this, Rasmussen said an even larger question looms: “If magma water content controls magma storage depth, what controls magma water content?”

The study was also coauthored by Mindy Zimmer of Pacific Northwest National Laboratory. Funding and support  were provided by the Smithsonian, the U.S. National Science Foundation, the Community Foundation for Southwest Washington and the U.S. Geological Survey.

This story is based in part on a press release by the Smithsonian Institution.