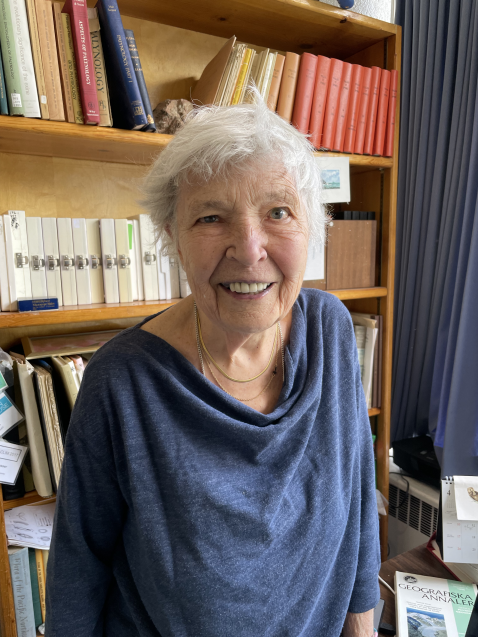 Linda Heusser, age 90, has worked at Lamont for decades, analyzing pollen from marine sediments in order to better understand trends in how vegetation responds to climate change.

Linda Heusser turned 90 years old on April 12, and the only birthday present she really wanted was another sediment core to study.

The adjunct researcher at Columbia University’s Lamont-Doherty Earth Observatory analyzes pollen from marine sediments in order to better understand climate trends going back as far as 2.3 million years. She has worked at Lamont on and off for decades.

Her desk in Lamont’s Old Geochemistry building faces a wall full of windows looking out on the greening campus. It is covered in papers and surrounded by old books on geology and palynology (the study of pollen), and boxes full of microscope slides.

Heusser finds it difficult to walk, but her mind is still sharp, and she has plenty of enthusiasm for her work.

The work starts with a marine core — a long tube of mud extracted from the ocean floor, whose sediment layers get older and older as you go down. She takes these sediments and runs them through nylon screens to sieve out the pollen grains, which range in size from 10 to 150 microns, or about the width of a human hair. The process can take several hours. Then she treats the extracted material to remove other organic materials. “Pollen survives hydrofluoric acid, all these nasty chemicals,” she says admiringly.

Once the pollen is isolated, she puts the samples onto slides and starts with the top, most recent, layers, counting out 300 pollen grains from each slide and tallying what type of tree they came from. Each slide can take 2 or 3 hours. To Heusser, there’s a thrill of looking deep into the past.

“It’s always exciting to go down core and see how it develops, what’s happening,” she says.

Heusser became a geologist at a time when that wasn’t really something women did — especially women who were mothers.

“Back then it was hard to find women who worked and raised kids,” explained her colleague, Dorothy Peteet, director of the Paleoecology Division of the New Core Lab at Lamont Doherty Earth Observatory. “Linda was a pioneer in her own way. She was a role model for me.” 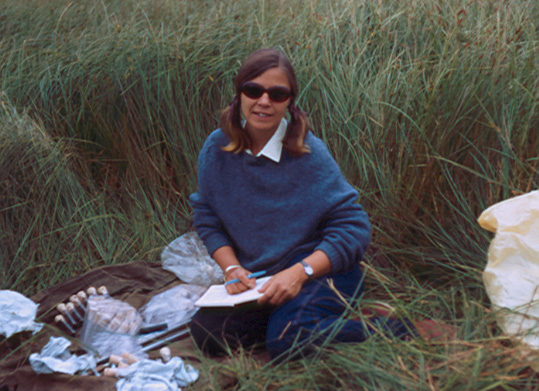 Heusser originally set out to become a social worker, like her mother wanted. She studied psychology at Wellesley College in Massachusetts.

Attending an all-women’s college had advantages and disadvantages. “You weren’t put down by men in chemistry or anything,” she says. “I had no idea that women weren’t accepted equally in graduate school or work. I was very naive.”

She married her first husband during her senior year at Wellesley, finished her B.A., and left the academic world for nine years to start a family. Then, one day, her husband brought home a book on historical geology. She remembers the excitement she felt as she read it. Right then, she knew she wanted to be a geologist.

“I never had a geology course. I never thought about looking at what a rock could tell me. But that book on historical geology did it. It was deus ex machina,” she said.

She spent a year taking as many geology courses  as she could in Columbia’s School of General Studies — while also taking care of her three children. She was then able to enroll in a geology master’s degree program at Columbia; there was only one other woman.

Heusser was much older than the other students, so she didn’t mingle much. But during the program, she shared an office with Stephen Jay Gould, the paleontologist, evolutionary biologist, and popular science writer. She earned her master’s in 1969, then wanted to enroll in Columbia’s PhD program.

“I wanted the excitement of, you know, exploring,” explains Heusser. “I was told, ‘You can’t have a PhD because you’re a woman.’ That really happened. I was devastated. But there was NYU. So I marched down to NYU, and they gave me a fellowship,” she says, laughing.

“That was in the days when Columbia Geology wanted white, Ivy League, and male students,” she said, ticking off each characteristic on her fingers, “and that was it.”

She earned her PhD in 1971. For her thesis, she analyzed pollen and spores to reconstruct geological events in Washington’s Western Olympic Peninsula over the past 48,000 years or so. She loved doing field work there, collecting samples along the sea cliffs. 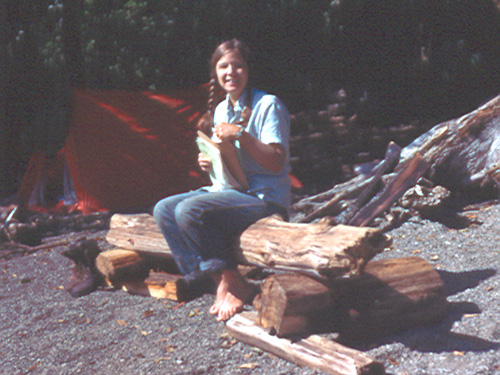 “When I discovered the Pacific Northwest, with the sun shining, and these evergreen forests, the ocean? Oh wow.” To this day, her favorite pollen to encounter on her slides is Western Hemlock, because she identifies it with the Olympic Peninsula.

Heusser’s second husband, Calvin Heusser, was an established palynologist and they worked together. So when it came time to submit her thesis for publishing, “someone asked, ‘Well, did she write it, or did Heusser write it?’ So I knew I needed a separate field, and working with pollen in marine cores was a new field.”

A colleague at Oregon State offered to let her study the pollen in a long core of sediments drilled from the ocean floor; Nick Shackleton, who would become known as one of the founders of paleoclimatology, would be studying the same core by analyzing isotopes in the shells of ocean-dwelling, single-celled organisms called foraminifera, which record sea-surface temperatures.

During glacial times, all the pollen in the samples from this region comes from conifers. The pollen becomes more diverse and includes deciduous species during the warmer interglacial periods.

“As I went through maybe a hundred slides, all of a sudden I came to alder, and I knew — that was the last interglacial,” she said.

Meanwhile, in England, Shackleton was looking for an isotope stage known as 5e, the last interglacial period before today’s, which ended 116,000 years ago. He came to visit Brown University, and Heusser met him there to compare results.

“He put his diagram on the board, and I put mine on the board, and there it was — 5e was the alder peak. This was the first time that the land record had been correlated with the marine record for the last interglacial.” In other words, it was the first time anyone was able to show that vegetation responded to global climate change at the same time changes were happening in the ocean.

Linking the marine and terrestrial records was a key advance in paleoclimatology.

Being able to use marine cores to understand what was happening on land helped to reveal the nature, duration, and age of the last interglacial period. For example, the presence of redwood, oak, and Douglas fir pollen showed that the last interglacial in the Pacific Northwest had vegetation similar to that of today’s.

Shackleton, a friend of Calvin Heusser, came to stay at their house in Tuxedo, New York, to write up the results. She remembers that Shackleton was still operating on Cambridge time, so he would sleep until about noon and stay up half the night. Heusser was an early bird, so they only had time to work on their paper in the afternoons. They wrote the paper up in about three days. It was published in Science in 1979.

Since then, Heusser has analyzed pollen in marine cores from all over the world, including Southern California, Japan, New Zealand, and Chile, establishing the first direct correlations between terrestrial and marine records in those regions. Her work has helped to illuminate how the planet has responded to climate change since the Miocene, a period approximately 2.3 million to 5 million years ago. Her work has documented, for example, the collapse of the California current, which brings cold, nutrient-rich water along the West Coast, during glacial periods over the past 550,000 years.

Heusser worked in Lamont’s Core Lab alongside the CLIMAP team, which was studying cores from the oceans in order to understand the Earth as it was during the last glacial period. Heusser contributed through her work on pollen off the coast of California and Washington, and through her paper with Shackleton. “It was a very dynamic time, a very exciting time,” she says. 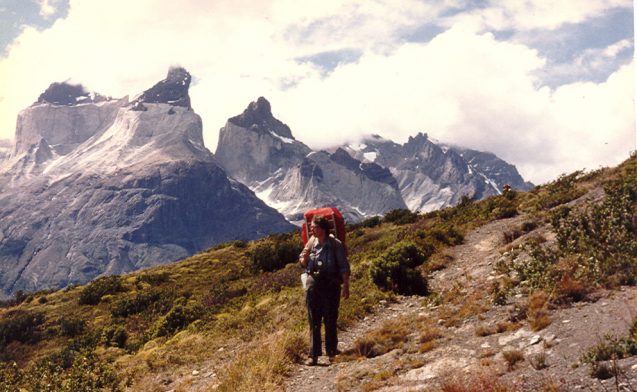 Meanwhile, she was also trying to balance work and family. She chuckles remembering a time when she was teaching at both NYU and in Newark, and she would have to race to pick up her daughter from ballet school at Manhattan’s Lincoln Center.

Because she was a working mother, Heusser couldn’t go on months-long research cruises to retrieve sediment cores. But she did manage to travel for field work now and then; for one, her husband worked in Chile, and she would come along as his field assistant. The Heussers also spent several springs at Clare Hall at the University of Cambridge in the U.K., where they became lifelong fellows.

Heusser stepped away from her research in 2004 to care for her husband, who was then ailing. After he died in 2006, she began volunteering at a nearby mental health facility. “So I became an authority on adolescent anxiety,” said Heusser, laughing. At the time, she was in her mid-70s.

She returned to Lamont in 2010, at Peteet’s invitation. “She just jumped right back into it, and she’s been publishing ever since,” says Peteet. “She’s a fierce, industrious person. She’s very productive. In the lab, she does 24 samples at a time. I could never do more than 12.” 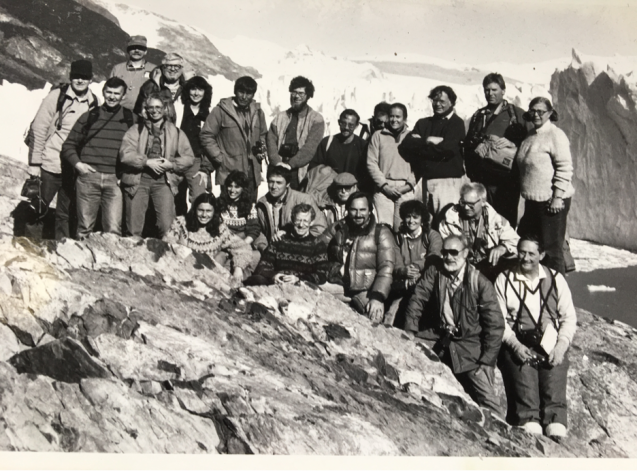 Heusser (top row on the right) during a field trip to southern South America. Dorothy Peteet is third from the left on top. The trip was organized by Wally Broecker, located third from the right in the back row.

Nowadays, Heusser is analyzing cores that Peteet collects locally with the intention of improving sea level models. She’s also working on a deep-water core from off the coast of San Diego that should provide the first detailed record of climate and vegetation in Southern California since the last interglacial period. The marine record is essential since the region’s climate is so dry; there are no lakes to core.

Heusser celebrated her 90th birthday a few weeks ago with her children and grandchildren.

“What’s exciting in terms of a birthday present is Dot [Peteet] just told me, ‘Gee, we have this long core from Piermont [NY],’ “She’s done all the macrofossils on it — would I be interested?”

Has she ever considered retiring? “What would I do?” she asks. She would rather be peering into a microscope, exploring the deep past and wondering what she might find next.