Fieldwork in Bangladesh During the End of Ramadan and Eid Festival

I am on the campus of Bangladesh Open University (BOU) in Bangladesh with Eid al-Fitr celebrations later this morning. Last night the month of Ramadan, when Muslims fast during daylight hours, came to an end. Our group was on the way back from the field at sunset when Ramadan ended and the Eid festival began. We stopped at a restaurant in Gazipur and had large plates of biryani. Those in our group who are fasting had not eaten since 3:30 am this morning. 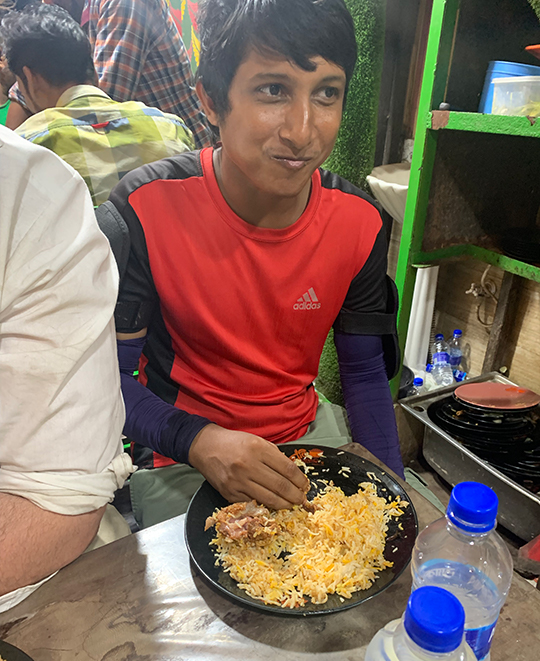 Arman breaks his Ramadan fast with mutton biryani to start the Eid.

I have returned to Bangladesh once again. I am taking advantage of the magnetotelluric (MT) instruments that were shipped here for my last trip to collect more electromagnetic data in northeast Bangladesh before they have to be returned to the U.S. In addition to the four broadband (BB) instruments that we used in March, Samer Naif from Georgia Tech, is bringing four long-period (LP) ones that can see even deeper. This time, we are deploying the instruments for three (BB) to six (LP) days at a time. The longer deployments can better determine lower frequency signals that can see deeper into the earth. With the BB, we expect to see the entire 15-25 km of sediments here. With the LP, we will see 30-40 km to the Moho, the bottom of the crust. 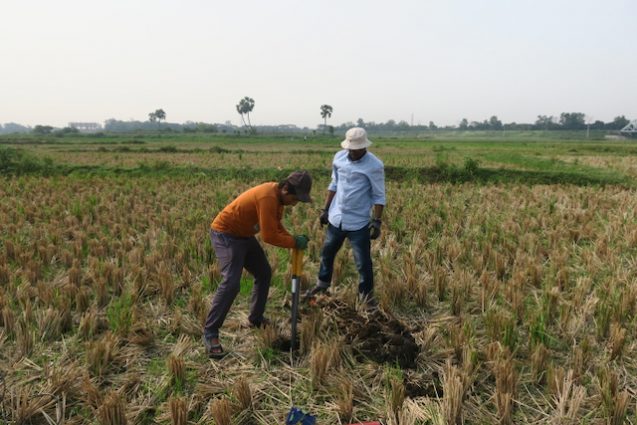 Arman and Biplab dig a hole for the vertical magnetometer with a post hole digger in a recently harvested rice field.

We are doing this experiment in a part of Bangladesh that is tectonically active. The same fault that ruptured in the 2004 Sumatra earthquake continues into Bangladesh, but is buried by the thick sediments here. We want to image the fault, the subduction megathrust, within the sediments, and the bending of the crust as the Indian plate is subducted beneath the IndoBurma subduction zone. Both are poorly known, but impact our assessment of the earthquake hazard here. 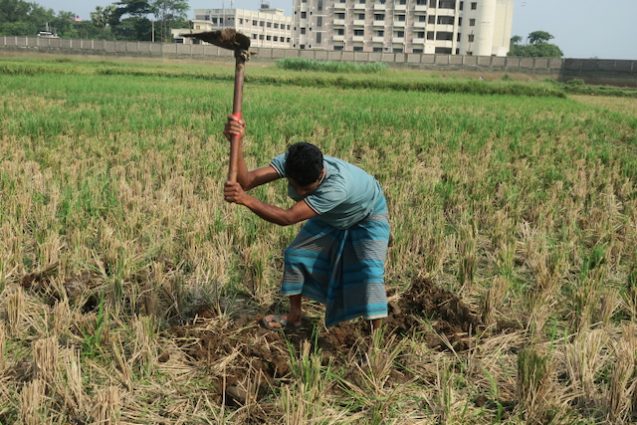 A local farmer helps dig the trench for the north-south magnetometer using a kodal.

Fieldwork during May, the hottest and most humid month before the monsoon rains start in June, is not ideal. Neither is trying to work through the end of Ramadan and the biggest holiday of the year. However, we are limited by the cropping season and the need to return the BB MT instruments. We are trying to work between the harvesting of the spring rice crop and the planting of the summer crop since our instruments have to be buried in the fields over a 100-meter by 100-meter area. 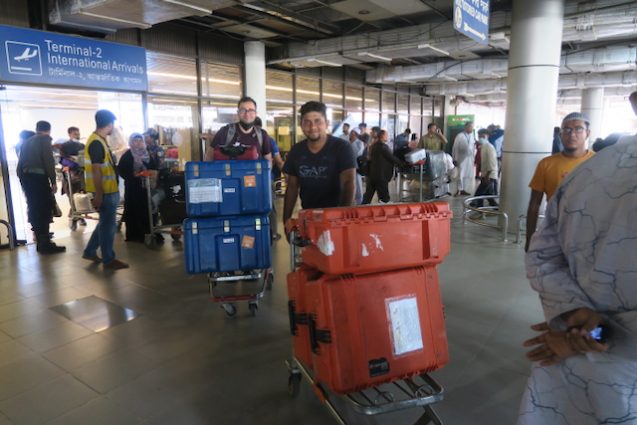 Masud helps Samer with his two carts full of equipment at the Dhaka airport.

Our plans in Bangladesh always have to be flexible, this time from the very start.  Samer missed his flight from the U.S. trying to deal with travel paperwork and the seven pieces of luggage containing the LP MT instruments. Oliver, his student, and I arrived on time on the morning of April 29 and were met at the airport by Masud, Arman and Biplab, three Dhaka University students who were with me on the last trip, and thus are familiar with installing MT instruments. However, instead of a boat, we are traveling by vans driven by Babu, our long-term driver and Sumon. We all continued from the airport north to the main BOU campus, where my long-term collaborator, Humayun Akhter, is now the vice-chancellor. The BB MT were stored here. We spent our first afternoon retrieving the instruments and getting set up in the BOU guesthouse, where we will be staying. 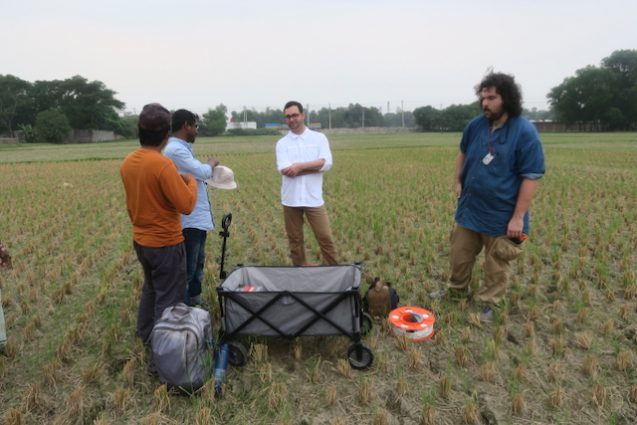 Arman, Biplab, Samer and Oliver stand by the folding cart that we brought for transporting the equipment.

We will deploy the instruments in a 200-kilometer-long transect from here to the eastern edge of Bangladesh across the subduction zone and the many folds and faults that deform the sediments. We will also do a shorter north-south transect to capture the northward tilt of the deformation. Once the instruments are installed, we plan to shift 1-2 of them each day for most of a month. Since the LP MT are at each site longer, and must go back to the U.S. when Samer leaves, we will have many fewer of those stations. Our plan to start installing the LP MT right away was foiled by Samer missing the plane. 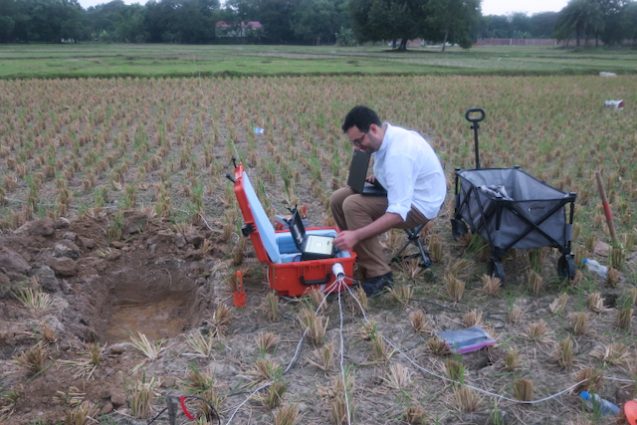 Samer setting up one of the LP MT instruments to record the data.

The MT instruments include electrodes that must be placed about 50 meters from the recorder in each of the cardinal directions to measure the electric field. The BB MT have three magnetometers that must be buried facing north, east and vertical.  Burying the 1-meter-long coils is the hardest part of the deployment in the heat. The LP instruments have a smaller magnetometer that measures all three components, but must be carefully oriented in its hole. They are both powered by large car batteries — one for the LP, and three for the BB. 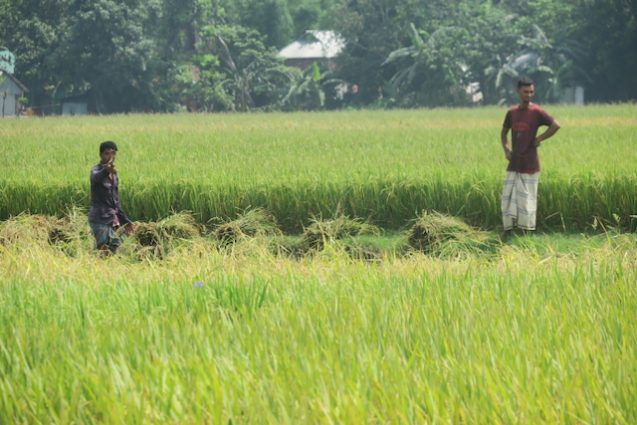 To install the MT without disturbing crops, we need places where the rice has been harvested, at least for the central recorder and the magnetometers. Having a rough spatial arrangement for the array in mind, we pick promising sites from Google Earth images of the fields and Chris Small processing of satellite data to show vegetation, water and soil. Unfortunately cloud cover obscured recent images for the first part of our deployment, so we have been flying blind. 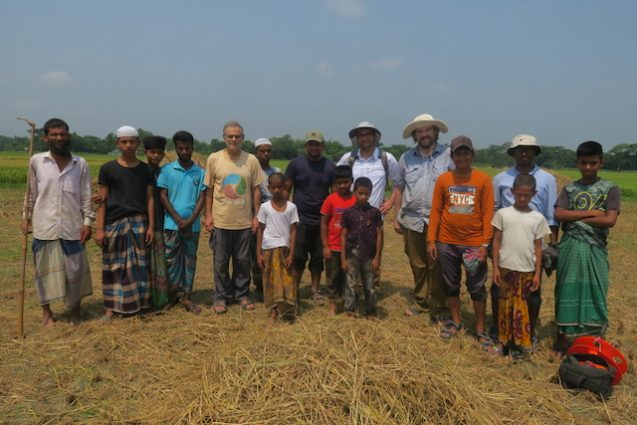 A group photo of the six of us with local farmers and children.

To avoid the heat and accommodate Ramadan, we are working early. Those observing have breakfast at 3:30 am before morning prayers and a nap. The rest of us have breakfast at 5:30 am. We then all meet at 6 am to pack for the day and head off to the field. The morning after we arrived, we set off for our target area and scanned the fields along the way. On our first try, we got lucky. We spied a promising area from the main road, then took local roads to get as close as possible. We hiked into the fields and found some fields that had recently been harvested. A local farmer directed us to the owner, and soon we were deploying. We hired the other farmer to protect the instruments. 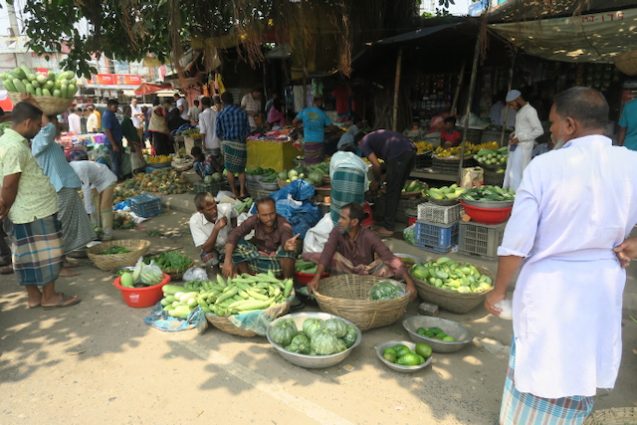 A market where local produce, both familiar and unfamiliar, is being sold.

We finished out first site, just in time for Masud and me to head to the airport to get Samer. Since he got through customs quickly, we were able to install an LP MT in the afternoon. For that site, we tried a field that we had spotted on the way to the previous site and had similar success. On that first afternoon, the temperature was 94 degrees, but the humidity made it feel like 110 degrees. Despite the problems and the heat, it was a good first day of fieldwork. 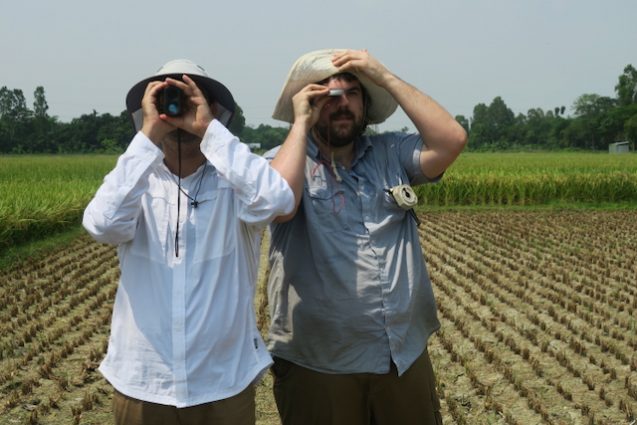 Samer uses a laser rangefinder for distance while Oliver peers through a hand-bearing compass for direction to position one of the electrodes.

The next day also went well. For one, the initial try was no good because of nearby power lines, but we were able to find an excellent place on the second try. There was a harvested field in the middle of a larger set of fields. We could put the recorder, battery and magnetometer there, while the electrodes extended into the still-maturing rice around it. For the second site, we drove down a local road then tried a barely passable road as far as we could go. It was far enough for us to walk to the open fields. In the end, we succeeded in putting in two more LP sites. 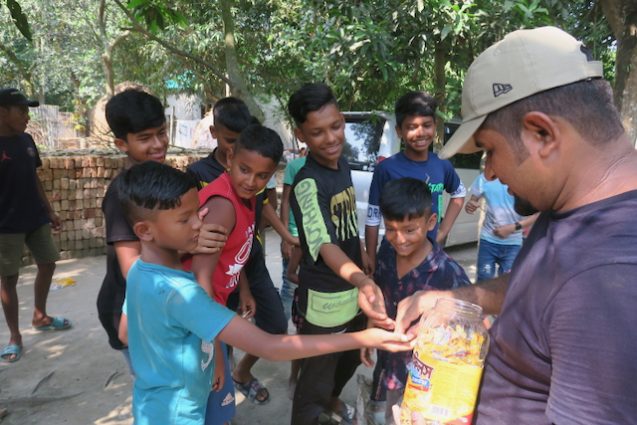 Masud hands out candies to the local children after completing another MT site.

Our third day, the last of Ramadan, started off well. In our target area we drove along the only local road wide enough for our van. It didn’t go where I was hoping, but it did lead us to a good site after about 2 kilometers of driving. Then our good luck ran out.  For the second site, we found a possible field, but the farmer didn’t give permission. Samer and Arman went to repair a cable that an animal had bitten trough, while the rest of us kept looking. Four more tries later, we gave up. This area was just too densely populated, and the few potential sites had high-voltage power lines across them. We decide to put in an extra site farther east and went to scout there. Samer and Arman fixed the problem and they also scouted another site. We met up and drove back, breaking the Ramadan fast along the way. The scouting means that we should be able to install two sites tomorrow, instead of the one we expected due to the holiday. 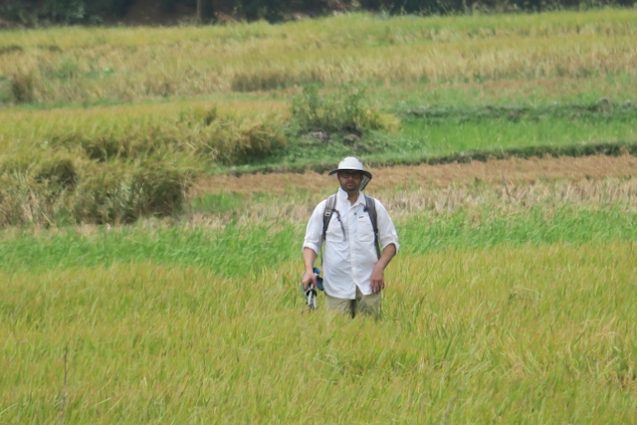 Samer walks through a field of ripening rice after checking the instrument recordings. 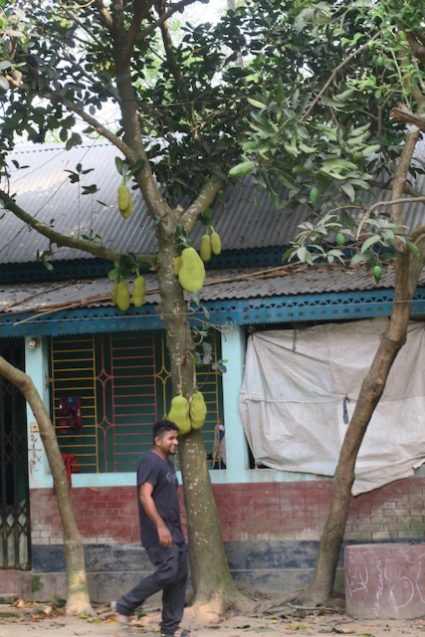 Masud walks by a jackfruit tree. The large fruit will be ready to eat later this month.