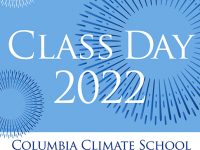 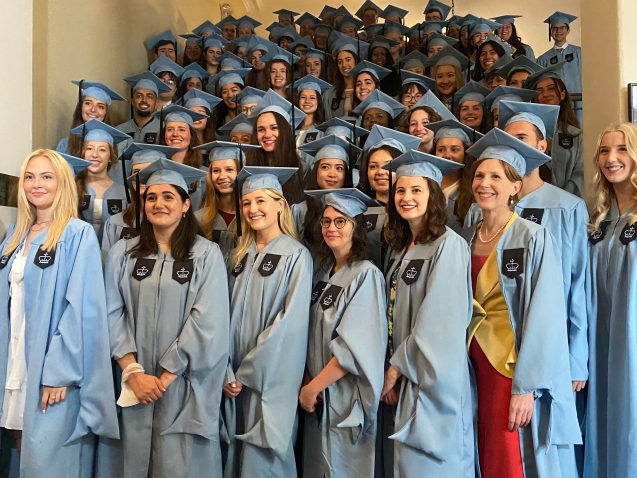 The Columbia Climate School’s class of 2022.

The Columbia Climate School today celebrated its first-ever Class Day, a ceremony that honors the school’s 2022 graduates. These students are the first group to graduate from the recently launched Climate School.

After an intense year of interdisciplinary climate education, 92 students in the MA in Climate and Society program finished their classes and donned their light blue caps and gowns for the Class Day ceremony.

“It is tremendously exciting to be graduating our first Climate School students today,” said Alex Halliday, founding dean of the Climate School, while addressing the graduating class in Columbia’s Miller Theater. “This event marks the completion of your studies here at Columbia. More importantly, it marks the beginning of the vital work you will undertake in the world, equipped with an understanding of how the climate system works, the challenges it brings, and the ways to think about the kinds of solutions that are needed.”

The ceremony emphasized not only the daunting challenges of solving the climate crisis, but also the potential for each graduate, and every person, to make a contribution.

Environmental justice advocate Peggy Shepard gave a keynote address in which she discussed climate change’s disproportionate impacts on communities of color, Indigenous peoples, and low income communities, and how the world cannot transition away from fossil fuels without also addressing inequity and systemic racism.

“Climate change is arguably one of the most significant social and political challenges of this century,” she said. “But you all know that. The question is: What will you do about it? … Those of us who have been privileged to achieve education, skills and experiences, and even power, we must be role models. We must be changemakers with the spirit of justice, collaboration and ethical leadership. We can all be changemakers. That is our challenge for you today.”

Without a doubt, that challenge could not have fallen on more willing and capable shoulders.

While the students still have summer internships to complete before they officially graduate, the first class of the Columbia Climate School will also celebrate their achievements at the university-wide commencement ceremony for 2022 graduates on Wednesday, May 18. 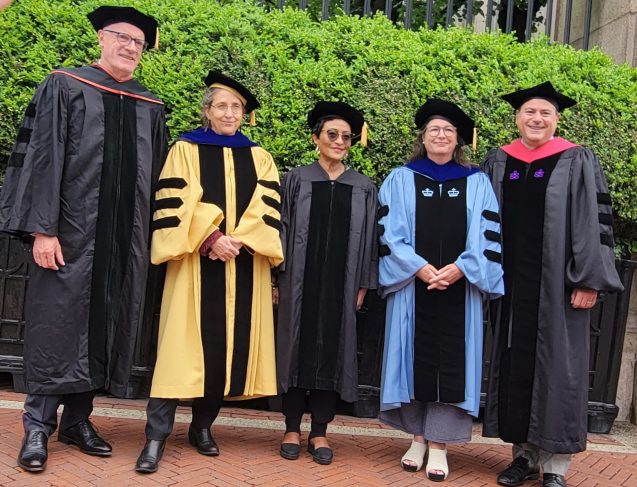 While this may be the first class to graduate from the Columbia Climate School, the MA in Climate and Society program has been producing impactful graduates since it was launched in 2004 by climate scientist Mark Cane.

The Climate and Society program grew tremendously this year, nearly tripling in size to 86 students.

“​​The visibility of the Climate School and the urgency of the climate crisis both contributed to the explosion of interest in the program,” explains Mingfang Ting, one of the program’s co-directors.

Not only did the program grow in size, but also in importance, pointed out Cynthia Thomson, director of graduate programs at the Climate School.

“We went from this tiny little program that sort of existed in a corner of Shermerhorn Hall to this program that right now is the only education program in the Climate School. And so it was really interesting to see all that attention on the students and the program.”

These changes didn’t come without some growing pains. Launching a new school, tripling enrollment, and pandemic precautions like social distancing and mask wearing meant the school year got off to a rough start, said Thomson. But things started to come together in the spring as students and faculty could have more face-to-face interactions.

“Despite the increase in size of the program, we were able to keep the class size small as before, by offering the core courses in multiple sections,” said Ting. “The smaller class size helped to maintain the active engagements of the students in the core classes.”

Being part of the Climate School also allowed the program to hire a career development officer, Gerald Cotiangco, “who has been providing excellent professional help to our students as they figure out the next steps of their lives,” said Ting.

“It’s the first time our students have had very specific, tailored professional development help, and it has been tremendous,” explained Thomson. “Gerald’s been fantastic, serving basically as a one-person career office, meeting one-on-one with them, helping them find internships. A lot of them, more than in years past, have secured jobs for internships, so that after the summer internship, they’ll continue in those jobs.”

Being part of the Climate School also meant that, for the first time, the program could design its own elective courses to offer to students, in addition to the classes being taught at other Columbia schools. That meant that climate context could be “baked into” the courses, rather than relying on the students to bring their own climate lens. The program launched several unique electives, including Climate Mobility, Strategic Communications for Climate Change, Post Disaster Economic and Housing Recovery in the US, and Climate Change and Disaster Management.

Thomson added that being part of the school means “we have all these top researchers and practitioners to tap into to make this the flagship climate master’s program not only at Columbia, but in the country.”

In the coming school year, the Climate and Society program will be expanding its list of electives. Climate Change Mitigation will be offered in fall 2022, and a course on climate justice is in development.

Based on feedback from students, the program is working hard to strengthen its focus on climate justice and integrate the theme of justice across the curriculum of the program, rather than just covering the topic in one course, said Ting.

She added that the program is also exploring developing areas of focus, where the students could cluster three to five courses in specific disciplines that could turn into “tracks” in the future. This would allow students to specialize, while still emphasizing the program’s interdisciplinary nature.

Whatever lies ahead, Thomson hopes the program will continue to be dynamic. “Climate change is such a fast-moving topic, so as the dial changes, things refocus, and certain things become more important. Columbia’s program will be responsive and really tap into the industry professionals who are doing this work out in the real world.”

Thomson commends the students for their resilience in the face of COVID, and their patience and constructive feedback as the program found its footing.

“I think it’s really awesome that they are forever going to be the first students of the Climate School,” she said. “That’s a badge they’ll get to wear going forward.”