President Biden is soon expected to sign the Inflation Reduction Act into law, marking the U.S.’s most significant investment to date in the fight against climate change. Along with tax reform measures and efforts to bring down healthcare costs, the bill provides $370 billion toward decarbonization.

“This is the first major environmental law to be enacted since 1990, and the first ever to focus on climate change,” said Michael Gerrard, an environmental lawyer at the Columbia Climate School’s Sabin Center on Climate Change Law. Gerrard and other experts from around the Climate School have been discussing the bill’s expected impacts and what else is needed to meet the U.S.’s climate goals under the Paris Agreement.

Our senior fellow Romany Webb speaks to @BBCWorld about the #IRA: This is "huge step forward" for the US. The Act will not only "drive significant emissions reductions," but also "create about 1.5 million new jobs in the US by 2030." https://t.co/yyPV5QUDWU

On the positive side

The bill’s $370 billion investment in a low-carbon economy will be paid for by prescription drug savings and raising taxes on large corporations, among other measures. It includes $60 billion for growing renewable energy infrastructure such as solar panels and wind turbines, NPR reports. It also provides tax incentives for nuclear power production, electric vehicles, and energy efficiency.

The Rhodium Group notes that these measures will help individuals save on energy costs, and will boost the nation’s energy security by reducing reliance on imported fossil fuels and exposure to their volatile prices.

Our very own Steve Cohen was featured on Fox Weather 📺️ addressing the recent passing of the Senate bill on Climate Change. ⚡️He breaks down how the Inflation Reduction Act benefits the climate.

The Inflation Reduction Act puts the U.S.’s goals under the Paris Agreement within reach. The country pledged to reduce its greenhouse gas emissions by 50-52% below 2005 levels by 2030. With the measures included in the I.R.A., the U.S. may reach as much as a 44% reduction, according to the Rhodium Group, compared to a maximum of 35% under current policy. 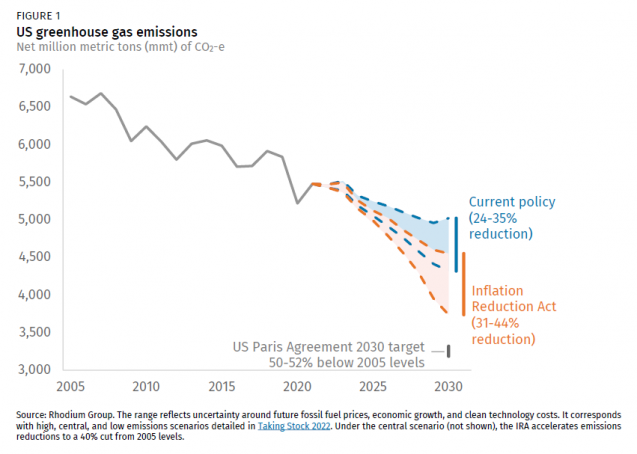 The tax credits may also help technologies like carbon capture, clean hydrogen, and other clean fuels to scale up to more impactful levels, Rhodium pointed out.

In order to get the unanimous support of the Senate’s 50 Democrats — including West Virginia’s Joe Manchin, who has received significant financial backing from the fossil fuel industry — concessions had to be made.

“The bill is full of compromises,” said Gerrard. “Most troublesome are the requirements for more auctions of federal land and water for fossil fuel extraction.”

As Grist explains, “The reconciliation bill reinstates old auctions that the Biden administration has tried to cancel and forces the administration to hold several new auctions over the coming years. The legislation also requires that the government auction millions of acres of oil and gas leases before it can auction acreage for wind and solar farms.”

However, experts, including Gerrard, hesitate to call this a major victory for fossil fuel companies. “Only a fraction of these auctions will lead to actual mining and drilling,” he explained. “Overall, the environmental benefits of the bill far exceed the costs.”

The land concessions aren’t all. Gerrard said that while the bill provides many rewards for making climate-friendly choices, it takes away some punishments for emitters.

“The bill includes an unprecedented fee on methane emissions, but also ways out of it. The much more significant penalties for carbon emissions from power plants were eliminated early on by Senator Manchin,” he explained. “The Supreme Court also just made it more difficult to regulate these emissions. Therefore coal plants will continue their decline, but not as rapidly as we need.”

Although the Inflation Reduction Act will take the U.S. much of the way toward meeting Biden’s 2030 emissions reduction goals, Gerrard said that “more is needed.”

The IRA is symbolic in the sense that it shows the disproportionately low amount US spends addressing the climate crisis compared to other expenditures. But what the IRA will accomplish, while too little, will be real and significant. https://t.co/sXfD5joYAP

“Achieving the 2030 goal, and especially the 2050 target of net zero emissions, will require considerable technological advances. The IRA and the CHIPS Act, which President Biden signed on August 9, will greatly accelerate the needed research,” said Gerrard. “EPA must still exercise its existing authority under the Clean Air Act and other laws; state and local governments must act; the private sector must move forward.”