The following is an excerpt from a blog post by the Columbia Climate School’s Sabin Center for Climate Change Law. 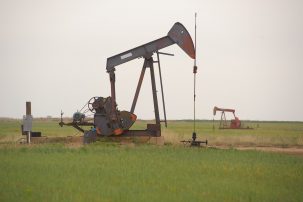 At Tuesday’s signing ceremony, President Biden described the Inflation Reduction Act (IRA) as “one of the most significant laws in our history.” Political rhetoric aside, its passage is a major achievement. After decades of inaction on climate change, the U.S. Congress has finally taken a step forward. The IRA allocates billions of dollars to support the development of renewable energy, electric vehicles, and other clean technologies that will drive down greenhouse gas emissions. But, like much of what happens in Congress, the IRA is a compromise.

Many have complained that the IRA includes provisions that benefit the fossil fuel industry. Of particular concern is a section that prevents the Department of the Interior from leasing federal land for wind and solar energy projects unless it has offered a certain amount of land for lease for oil and gas development. Tying the leasing of land for renewable energy projects to fossil fuel development in this way is problematic for a host of reasons. But its real world impact might be more limited than many fear.

The IRA only conditions the issuance of leases for renewable energy projects on the offering of land for oil and gas development. There is no requirement that oil and gas leases actually be sold. In recent years, industry interest in developing oil and gas resources on federal land has declined, leading to fewer leases being sold. That trend is likely to continue in coming years as a result of other changes to the federal land leasing program mandated by the IRA, as well as various market forces.

The IRA requires the Bureau of Land Management to make major changes to its oil and gas leasing program — changes that will likely to discourage oil and gas development on federal lands.

Read about the changes on the Sabin Center’s blog.