How Colonialism Spawned and Continues to Exacerbate the Climate Crisis 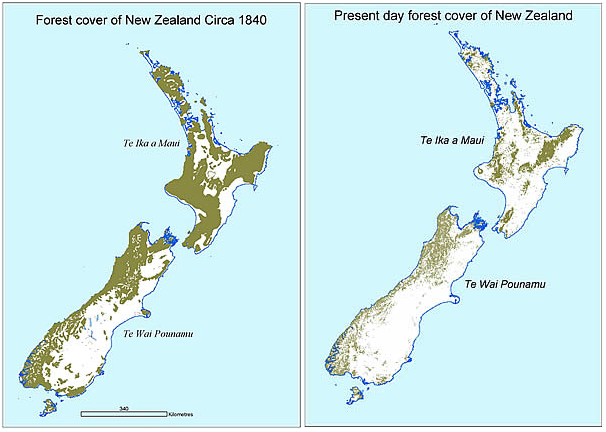 A comparison of forest cover before the British established a colony in New Zealand (left) versus today (right). Image: Decolonial Atlas

We currently live in an epoch that geologists call the Holocene, which began soon after the last major ice age ended around 11,700 years ago. But for over two decades, some scientists have argued that the label is far too antiquated. In 2000, the term “Anthropocene” — ‘anthropo’ for human and ‘cene’ for new — gained prominence. It highlights how human activities dominate the Earth’s land, atmosphere, and oceans, significantly impacting its climate and natural ecosystems.

The problem, some scholars say, is that the term assumes the climate crisis is caused by universal human nature, rather than the actions of a minority of colonialists, capitalists, and patriarchs. And the implication that the Earth was stable until around 1950, when the ‘Anthropocene’ supposedly began, denies the history of people who have been exploited by those systems for centuries.

Indigenous scholars have further addressed how the term stands for colonialist ideologies that sever the deep ties and interconnections between humans, plants, animals, and the soil.

“Instead of treating the Earth like a precious entity that gives us life, Western colonial legacies operate within a paradigm that assumes they can extract its natural resources as much as they want, and the Earth will regenerate itself,” said Hadeel Assali, a lecturer and postdoctoral scholar at the Center for Science and Society, a Columbia Climate School affiliate.

By 2008, countries in Asia and Africa gained independence from their colonial empires, which had by then returned to their homelands. And yet, colonialism is still not a thing of the past. It continues to oppress developing nations and minority communities globally — from Western Africa to Libya, Palestine to Ukraine, to places like Kashmir that are facing subjugation under military occupation.

For the first time in more than three decades since its inception, the Intergovernmental Panel on Climate Change (IPCC) mentioned the term “colonialism” in a 2022 report. Leading climate scientists acknowledged that colonialism is a historic and ongoing driver of the climate crisis.

“Present development challenges causing high vulnerability are influenced by historical and ongoing patterns of inequity such as colonialism, especially for many Indigenous peoples and local communities,” the report said. “​​Officials and scientists from around the globe now recognize the significant role colonialism has played in heating our planet and destroying its many gifts.”

Colonialism was motivated by the promise of plundering the environment and subjugating populations. And the pervasive and persistent institutions of colonialism make it far more challenging to address the climate crisis and implement solutions, especially in a just and equitable way.

A 2021 study published in Nature highlighted that research is less likely to investigate climate change impacts in the Global South, even though those 78 low-income countries are facing the worst impacts. They are also the least responsible for climate-warming emissions; the entire continent of Africa accounts for the lowest share of greenhouse gas emissions at 3.8 percent. In contrast, the U.S. and European Union are responsible for 19 percent and 13 percent of global emissions, respectively.

Climate policies continue to exclude Indigenous people worldwide even though they are disproportionately affected by rising sea levels and extreme weather events.

“We cannot have environmental justice without reversing the harms of colonialism,” explained Assali. “But we still do not address the colonial roots of climate change.”

The colonial roots of “desertification” and deforestation

By the end of the 19th century, French colonizers in North and West Africa banned rural communities from practicing their centuries-old subsistence farming methods. That soon led to extensive environmental degradation. The locals were forced to chop down forests to make way for cotton plantations and other cash crops throughout French Equatorial Africa — which extended from the Congo River into the Sahel.

As the soils of these regions lost moisture and the land started losing its vegetation, a French colonial forester coined the term “desertification.” The colonizers then blamed the land management practices of migratory tribes and other Indigenous people for the environmental degradation that they as outsiders had caused.

“The Indigenous way of life does not match this idea of Western-imposed private property and cash crop farming that the colonizers had implemented by force,” said Assali.

To date, history is repeating itself. In the southern region of Palestine, the Palestinian population that once lived and farmed the area was expelled — largely to the Gaza Strip — and the region is now facing widespread desertification after the Israeli government diverted the Jordan River and uprooted innumerable native olive trees. During the early stages of the founding of the state of Israel and the displacement of Indigenous Palestinian communities, a joint Israeli-Australian project planted thousands of eucalyptus trees instead of native trees and vegetation as an effort to “dry the swamps” of southern Palestine.

“That was a means of dispossessing people from their land because the eucalyptus trees dried out all of their ancient water wells and other water sources,” added Assali. “Even though Israel claims to be environmentally sustainable and innovative — in fact one of its founding myths is that it ‘made the desert bloom’ — they are actively causing the desertification of Palestine and using the land for exploitative purposes.” 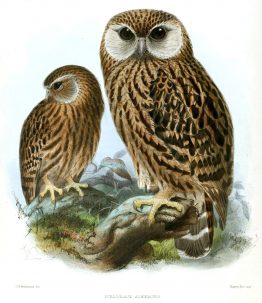 Illustration of a laughing owl, a New Zealand species that went extinct around 1914 due to loss of habitat. Image: John Gerrard Keulemans

Settler colonialism had similarly devastating impacts on the forest cover and biodiversity of New Zealand. According to the Decolonial Atlas, in 1840, European settlers started confiscating land from the Māori tribes and took over most of the country by 1939. The main goal of the colonizers was to extract as much timber as possible from the forests.

As the land holdings of Māori tribes dwindled, so did New Zealand’s forest cover. Present-day New Zealand has at least 60 percent fewer forests than before European colonization. That habitat loss resulted in the extinction of dozens of endemic bird species.

The lasting impacts of colonial conservation

“There is plenty of data from Australia that demonstrates that aboriginal fire management practices — which have been around for thousands of years — enhance biodiversity. But after the settlers banned controlled burning, it had disastrous consequences on the southern states of the country,” said Paige West, a professor of anthropology at Columbia University and director of the Center for the Study of Social Difference, an affiliate of the Columbia Climate School. 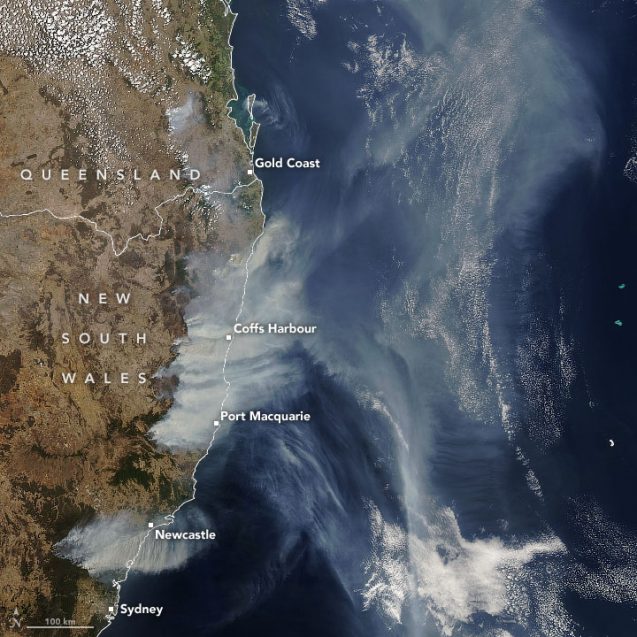 In the last two years, the intensity of wildfires in southern Australia has increased tenfold. In comparison, wildfires have been far less catastrophic in the northern parts of the country where controlled burning was never banned.

Around 5,000 miles away, British colonization also resulted in more intense and frequent wildfire events in India’s western Himalayan regions. Beginning in the late 1800s, the British cut down most oak and deodar forests for commercial purposes for more than a century. They then replaced those native forests — which were resistant to wildfires — with large-scale pine plantations for procuring resin. Every summer, dry pine needles are responsible for massive wildfires in several parts of the Indian Himalayas.

“Environmental destruction can be traced back to colonialism and imperialism,” said West. “To some extent, the present-day conservation interventions are a part of these colonial legacies.”

“A lot of conservation projects bring in outsiders to make hyperlocal decisions. They end up making things worse because they have rarely consulted that region’s rural and Indigenous people,” she added.

West further pointed out that in South Africa, British colonizers promoted the idea of protected areas to mainly focus on wild animals that they could hunt down as trophies. “This white colonial ideology of protected areas dictates that certain places in the world should be human-free to be considered ‘wild.’ That these places are only meant to be gazed upon.”

Ongoing colonial conservation efforts continue to affect Indigenous communities globally. They end up losing access to their lands and can no longer earn a livelihood through agriculture, fishing, or hunting.

According to a Deutsche Welle report, this happened to a migratory group of Indigenous people in Malaysia known as the Bajau Laut of Eastern Sabah. In 2004, their main fishing areas were turned into the Tun Sakaran Marine Park. Five years later, fishing was banned and the tribal community lost access to its main sources of food and income.

In 2021, Max Liboiron, an associate professor in geography at Memorial University of Newfoundland, published a book titled, “Pollution Is Colonialism,” in which they argue that the main causes of pollution are both chemicals and colonialism.

Scholars like Assali and Liboiron have pointed out that the entitlement to use land and oceans as dumping grounds, irrespective of which part of the world they are located in, is rooted in colonialism. Even though regulations are enforced to reduce pollution levels, the laws still permit some levels of pollution to occur.

In industrialized countries like the U.S. and Canada, this disproportionately impacts minorities. Indigenous, Hispanic and Black communities in both countries live in counties that have far higher levels of air and water pollution compared to their white counterparts.

The largest source of greenhouse gas emissions in Canada is from the oil and gas sector that extracts tar sands on Indian reservations — resulting in tribal communities losing access to clean water and being exposed to high levels of air pollution. These commercial activities are rooted in colonialism as they continue to usurp Indigenous land. 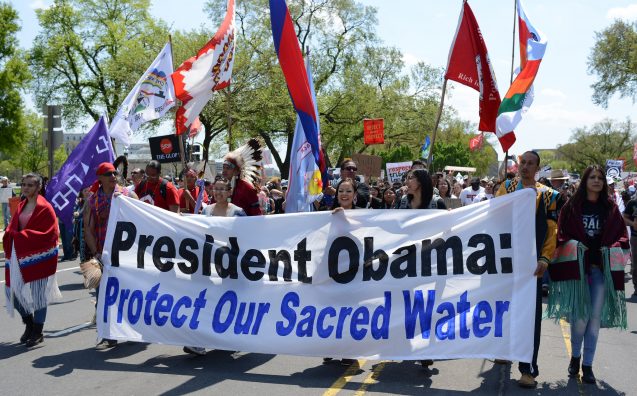 Indigenous protestors at a 2014 rally against the Keystone XL pipeline. Photo: Stephen Melkisethian

Oil and gas are extracted to create plastic and other disposable products consumed by the U.S., UK, and European Union. Meanwhile, the burden of recycling and incinerating plastic pollution falls on a few developing Asian countries. Former colonial empires set up this inequitable international trade that exploits developing countries by forcing them to get rid of their hazardous waste for cheap. This unjust practice is called waste colonialism.

The countries that are struggling the most with the impacts of waste colonialism are Indonesia, Vietnam, the Philippines, and Sri Lanka. While these countries are busy tackling the immense challenge of recycling and incinerating millions of tons of plastic waste annually, they are simultaneously blamed for “failing” to manage pollution.

At the same time, the World Economic Forum named Germany the world’s top recycler even though the country is infamous for being the biggest exporter of plastic waste. Every year, Germany exports an average of over one million tons of plastic waste, surpassing every other country in the EU.

In 2018, China banned waste imports from other industrialized countries. After that, Vietnam witnessed a dramatic increase in the amount of plastic waste being shipped from the West.

Vietnam announced that it plans to ban plastic waste imports by 2025. Currently, workers who segregate plastic pollution from Western countries into recyclable and non-recyclable earn less than $6 a day. They are routinely exposed to toxic fumes while burning plastic. 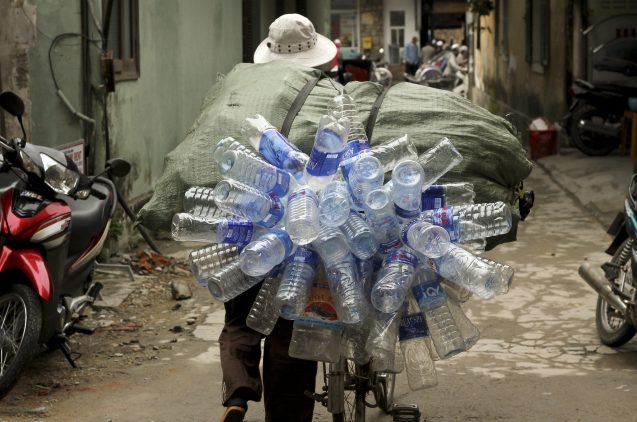 While former colonial empires generate huge amounts of trash, developing countries like Vietnam are expected to clean up the mess, recycling and getting rid of hazardous waste for cheap. This is known as waste colonialism. Photo: Magalie L’Abbé

“As long as these ongoing legacies of imperialism and colonialism do not change, we have little hope for environmental justice and climate change mitigation,” said Assali.

“We collectively require a lot of re-education that focuses on decolonization to fully understand how our world functions,” added Assali. “Then we can finally start to envision a future that is different from the exploitative structures and institutions that we are now stuck within.”