Urban Agriculture and the Damage From Storm Sandy

In the aftermath of Storm Sandy, which hit the mid-Atlantic region in October 2012, many of the vulnerabilities of New York City’s built infrastructure were laid bare. While one can now walk through many parts of the city without noticing any discernible damage, the storm forced a new understanding of the realities of extreme weather events. There is a new appreciation of resiliency forming in the storm’s wake. However, questions of resiliency are not just limited to buildings and infrastructure – they must also be applied to how we think about our green spaces. The effect of the storm on urban agriculture serves as an illustrative example. The past few years have seen a resurgence of urban agriculture in New York City. In addition to the city’s strong network of over 600 community gardens, (Greenthumb and GrowNYC-Open Space Greening) you can now find a variety of both private and non-profit urban farms operating in all 5 boroughs. This resurgence has produced many social and environmental benefits for the city. As the Urban Design Lab has said in their innovative study on The Potential for Urban Agriculture in New York City, “Developing agricultural capacity within or close to urban areas like New York City has the potential to reduce food transportation costs and environmental impacts, provide economic development opportunities, and reduce disparities in healthful access that have contributed to epidemic rates of obesity and diabetes among low-income populations.” As New York City expands its agricultural capacity, these benefits are worth protecting in the face of increasingly extreme weather and such efforts can serve as a guidepost for how we think about the resiliency of green spaces in our cities.

Farmers and gardeners in New York City already face special challenges due to the peculiarities of growing in a dense urban environment, including limitations in the availability of land, a relatively high occurrence of soil pollution, and generally increased operational costs.  Sandy highlighted the ways in which they are vulnerable to the effects of extreme weather. In addition to worrying about the effect of changing weather patterns on the growing season, it is now clear that New York City’s urban agriculture is also vulnerable to flooding and flood-related soil contamination. After seeing the damage to Added Value Community Farm in Red Hook, Brooklyn, I conducted a brief analysis to determine the extent of flood damage to New York’s urban agriculture. Based on preliminary results, 19 acres over 82 farm and garden locations experienced some level of flooding as result of the storm.  This is equivalent to roughly 10% of the total agricultural area of the city. This is a fairly high incidence of flooding and it is made worse by the fact that it occurred in the middle of the fall harvest season. For farms like Added Value where there was heavy flooding and complete loss of product, the financial repercussions will be significant.  Community gardens in particular often run on community goodwill and volunteer work.  In addition to a loss of product, many locations undoubtedly encountered a loss of materials, greenhouses, and other resources.  Some urban farms and gardens that have limited resources may find it difficult to recover from such a significant loss.

Extreme weather events endanger many more aspects of our lives than are commonly recognized and this is just one example.  As we look towards integrating greater resiliency into our urban environments, it will be worth focusing in on our green spaces and taking into account the vulnerabilities of urban agriculture and our local food systems.

Adam Gordon is an intern with the Columbia Climate Center and a Master of Science student in Sustainability Management with the Earth Institute, Columbia University. He is a co-founder of NYCOMPOST and a consultant with Farmhouse Solutions. 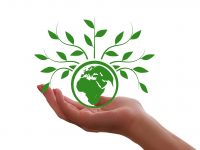 Regulating Greenwashing
Subscribe
Login
0 Comments
Inline Feedbacks
View all comments
wpDiscuz
0
0
Would love your thoughts, please comment.x
()
x
| Reply
This website uses cookies as well as similar tools and technologies to understand visitors' experiences. By continuing to use this website, you consent to Columbia University's usage of cookies and similar technologies, in accordance with the Columbia University Website Cookie Notice.Close