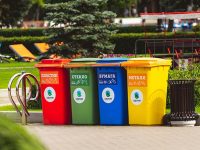 Want to Save the World? Start by Eating Less Beef If Americans halved their meat consumption, all our beef could theoretically be raised on pastures instead of factory farms. Photo: Martin Abegglen

Cows are like the Humvees of the animal world; they’re not very efficient, at least when it comes to producing food for humans. A hectare of land that would be able to grow 1,500 or 2,000 pounds of protein from peanuts or soybeans per year can only support about about 82 pounds of beef protein. That’s because compared to other animals we use for food, cows are a lot bigger and slower-growing, so they need to take in more calories before they’re ready to be eaten. They also consume a lot of water, produce an overwhelming amount of manure that can choke lakes and streams, and generate a significant portion of our nation’s climate-changing carbon emissions.

Yet not everyone who wants to live an environmentally conscious lifestyle can or wants to give up beef. That’s one of the reasons Maureen Raymo, a paleoclimatologist at Columbia’s Lamont-Doherty Earth Observatory, got together with her colleagues to imagine what a more sustainable beef industry might look like. The resulting study, published today in Nature Ecology & Evolution, estimates that switching from today’s factory farm model to pasture-raised cows could support nearly half of America’s current beef consumption. At the same time, it would dramatically reduce water use and carbon emissions, while feeding more people.

As a paleoclimatologist, Raymo normally studies things like ancient sea level rise. But several years ago she heard a talk by Bard College environmental scientist Gideon Eshel (the lead author on the new study), and was struck by beef’s huge impact on the environment. Later, while overseeing a sustainability project by students at Columbia’s School of International and Public Affairs (SIPA), Raymo suggested researching beef’s effect on climate. Eshel joined the group, and eventually one of the projects grew into today’s paper, with two of the SIPA students as co-authors.

The group initially wanted to know what would happen if ranchers raised their cows on pasture land, locally baled hay and food byproducts (such as carrot tops and leftover grains from alcohol distillation) instead of the crowded farms popular today. How much beef could such a system support? The crowded living conditions of most modern cattle farms necessitate food to be grown elsewhere and shipped in, which increases beef’s impact on the environment. Photo: Michael Zimmer

“We had no idea what that number would be,” says Raymo. “I thought it would be something like maybe 5 to 10 percent of the beef in the country could be grown that way.” But the real number turned out to be much higher. Their calculations found that America already has enough pasture land to support up to 45 percent of the cattle raised for food today.

Since those cows would roam around eating grass, this hypothetical system would free up 32 million hectares of land that’s currently used to grow food for cows; the land could instead be used to grow food for humans. The team estimates that planting those fields with foods like soy beans, kidney beans, barley, and sweet potatoes could provide up to 20 times more calories and protein than the beef they’d replace. This changeover would reduce the nation’s water use by 24 percent (saving 27 billion square meters of water per year) and slash fertilizer use by 28 percent. It would cut carbon emissions by two-thirds, saving approximately 590 million tons of carbon dioxide equivalent from entering Earth’s atmosphere each year.

But if you’re not into eating plant-based proteins, those croplands could alternately be used to support four times as many pork and chicken calories, producing three and five times as much protein, respectively, than the beef they’d replace.

None of the scenarios gets rid of all of the negatives that come along with beef and agriculture in general, says Raymo, “but you get rid of a lot of the environmental impacts.”

The study isn’t perfect, as the authors readily admit. They’ve defined “sustainable beef” as meat that’s raised primarily on pasture, but in fact, the exact definition of a “sustainable” beef industry is much debated. Eshel agrees that the paper’s definition is limited—it doesn’t include social values, such as considerations for how Native Americans might prefer to use the land that’s freed up in the model, or things like biodiversity and ecosystem health.

Transitioning to a model where all beef is raised on pasture land is also much easier said than done. “To me it seems deeply socially unsustainable,” says Eshel, pointing out that genuine grass-finished beef can be prohibitively expensive.

In a commentary about the paper, biologist Les Firbank from the University of Leeds said that “enacting such a consensus will be a huge challenge, given how the global market currently puts great pressure on farmers to produce cheap food with less regard to the other domains of sustainability.”

Fortunately, cutting back on beef consumption can have environmental benefits no matter what food system we subscribe to. The paper’s findings suggest that small changes in our diet—like replacing beef with chicken or beans for one or two meals per week—can add up to a big difference.

“Literally the most impactful thing you can do right away is just cut your beef consumption in half, or treat it like lobster,” says Raymo. “You don’t have to become a vegan or a vegetarian. Many people can make a subtle change to their diet that doesn’t require a huge cultural shift in how they eat, and it can have a really impactful, positive effect on the environment.”

Other authors on the paper include: Ron Milo,  Alon Shepon, and Taga Shaket from the Weizmann Institute of Science;  Brett D. Cotler from Brown University; and Stav Gilutz and Daniel Giddings from Columbia’s School of International and Public Affairs.

Americans would spend less money on beef in this scenario, because they would be eating less beef. Consumer Reports investigated the price per pound of beef in 2015: $7.38 for grass fed versus $4.95 for conventional. However, don’t forget that Americans will only be eating 40% of the beef they eat now. Let’s assume a family is currently eating two pounds of conventional beef per week– $9.90. In this new scenario, they would be eating 0.8 pounds of grass fed beef per week–$5.90. So the family is only spending 60% of what they used to spend on beef!