After Years of Progress on Food Security, Some Nations See Sharp Reversals

For years, it seemed the world was making progress eliminating hunger. Then, starting in 2014, the trend slid back slowly and reversed in many nations; now, some 700 million people—nearly 9 percent of the world’s population—go to bed hungry, according to the UN.

One of the hardest-hit regions is sub-Saharan Africa. Here, many people reflexively blame droughts stoked by climate change. However, a new study looking at the question in granular detail says that is not the case: long-running wars, not the weather, are to blame. The study, just published in the journal Nature Food, finds that while droughts routinely cause food insecurity in Africa, their contribution to hunger has remained steady or even shrunk in recent years. Instead, rising widespread, long-term violence has displaced people, raised food prices and blocked outside food aid, resulting in the reversal.

“Colloquially, people would say it’s climate-induced droughts and floods, because that’s what people tend to say,” said Weston Anderson, who led the study as a postdoctoral researcher at Columbia University’s International Research Institute for Climate and Society. “But academics have not compared the importance of drought to violence in triggering food crises in a holistic way.” 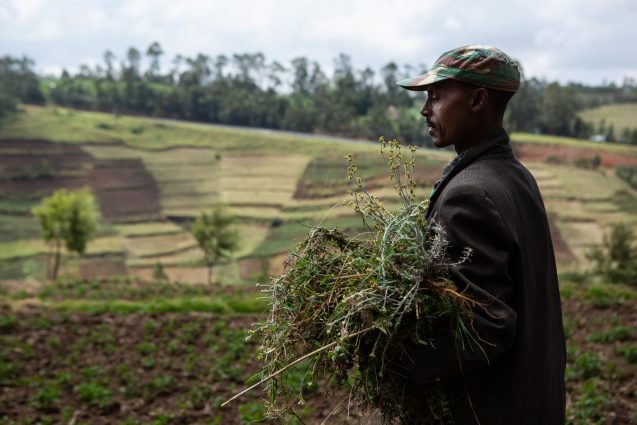 Violent conflicts are behind increased hunger in sub-Saharan Africa says a new study. Here, a farmer carries forage for his mule in southwestern Ethiopia. Further north in the country, starvation spread this year in the face of civil war. (Jacquelyn Turner, International Research Institute for Climate and Society)

To reach their conclusions, the researchers analyzed 2009-2018 data from the Famine Early Warning System, a USAID-funded network that provides information to governments and aid organizations about looming or ongoing food crises in dozens of countries. The system shows that the number of people requiring emergency food aid in monitored countries surged from 48 million in 2015 to 113 million in 2020. The system is not designed to quantify the different factors behind the emergencies. But Anderson and his colleagues were able to tease these out for 14 of Africa’s most food-insecure countries. The nations reach in a band from Mauritania, Mali and Nigeria in the west, through Sudan, Chad and other nations, to Ethiopia, Kenya and Somalia in the east. The study also took in several nations further south, including Mozambique and Zimbabwe. 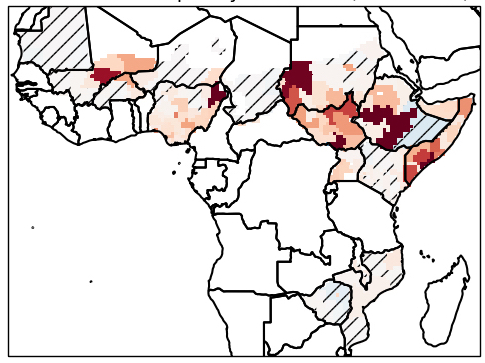 Not surprisingly, the researchers found that periodic, well-documented droughts have been behind food crises across large areas. However, the overall effects of drought did not increase during the study period; of anything, they went down in some areas. When drought did hit, farmers usually bounced back in the next planting season, within a year or so. Animal herders took twice as long to recover, because the areas where they live saw with more extreme conditions, and it took people time to rebuild their hard-hit livestock herds.

Amid the usual ups and downs of rainfall, violence has been responsible for the progressive increase in hunger, the study found. Long-term conflicts ranging from repeated terrorist attacks to pitched combat between armies have caused shortages lasting year after year, with no end in sight, the authors say.

This has been especially the case in northeast Nigeria, where the Boko Haram guerrilla army has waged a relentless hit-and-run campaign against the government and much of the populace for the past decade. Also in South Sudan, where a messy, multi-sided civil war that started in 2013 continues to sputter along. Sudan and Somalia also have seen warfare-induced increases in hunger, but in those nations, droughts have been the more dominant factors, the study found. In most cases, pastoralists are again the most affected by violence as they are with drought, because they are more likely to live in the most violence-prone areas.

The latest casualty is Ethiopia, where hunger has arced upward across the country in recent years, mainly due to below-average rainfall. But civil war erupted in the country’s Tigray region last year, greatly adding to the misery. The study did not examine this new conflict, but a recent UN report said that more than 5 million people in the region urgently need food aid, and many are already seeing out and out famine. “This severe crisis results from the cascading effects of conflict, including population displacement, movement restrictions, limited humanitarian access, loss of harvest and livelihood assets, and dysfunctional or nonexistent markets,” a top UN official said. On top of that, the drought in Ethiopia is projected to continue through this year. 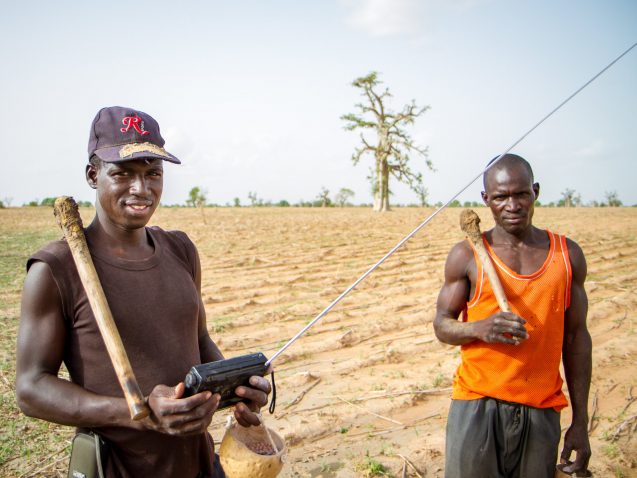 Drought periodically causes widespread food insecurity across much of sub-Saharan Africa, and may exacerbate the effects of warfare. Here, farmers in the village of Diouna, southern Mali, listen for weather bulletins. (Francesco Fiondella/International Research Institute for Climate and Society)

The researchers looked into a third possible cause of hunger: locusts. Again,  not surprisingly, locusts affect food security in some years by damaging forage and crops—but not on a scale large enough to account for the increase in hunger during the study period. (The study did not look at the unusually large waves of locusts that swept much of East Africa in 2019-2020; these may have had more drastic results.)

One further factor the researchers looked at: whether the onset of drought contributed to flareups of violence, and thus more hunger. One of the report’s coauthors, climatologist Richard Seager of Columbia’s Lamont-Doherty Earth Observatory, connected the dots in this regard in a widely cited 2015 study arguing that one spark for the ongoing Syrian civil war was a multi-year drought that drove many people off their land, into cities. This does not seem to be the case for the African countries, he said. The authors write, “We found no systematic relation between drought and either frequency of conflict or deaths related to conflict. Conflict may be affected by environmental stress in some cases but the relationship across Africa in recent decades is complex and context-specific.”

While warfare has been the predominant driver of hunger in some countries, that does not mean others have completely escaped the violence that can disrupt food supplies. For instance, over the last decade, much of Mali has been subject to on and off attacks by separatist and Islamist insurgents who at times have taken entire cities. Since 2015, the once largely peaceful nation of Burkina Faso has seen hundreds of attacks by rebels and jihadists, including a raid on a village in early June this year that killed more than 100 people.

“The overall message is that if we’re going to predict and handle food crises, we need to be paying attention to conflicts, which can be really complicated—not just the more easily identified things like drought,” said Anderson. “Droughts have a clear start and a clear end. But there are all kinds of violence. And a lot of the time, there is no clear start or end to it.” That said, warfare is certainly behind surging hunger in other parts of the world that the team did not examine, he said, most obviously amid the civil war raging in Yemen.

Africa has been dealt a harsh blow with the rise of Islamist, terrorrist groups such as Boko Haram and al Shabab that are wreaking havoc in villages and remote areas in many countries. These movements have their origins in the financing of rightwing Islamic fundamentalism of the Wahabi variant, by Saudi Arabia more than 50 years ago. Those concerned about violent warfare in Africa need to hold the government of Saudi Arabia accountable for the spread of this development and get the U.S. government to exert pressure on Saudi Arabia.