Floods, tornadoes and hurricanes cause deaths every year, but when it comes to weather-related fatalities, extreme heat is America’s deadliest killer. And the mercury is rising due to climate change: unprecedented heatwaves killed hundreds across Western North America this summer, making it one of the deadliest on record. 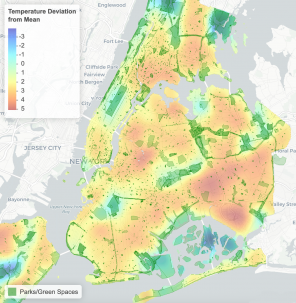 It may come as no surprise to most people that urban areas suffer more from extreme heat. Buildings, roads, and infrastructure all absorb, and re-emit, more of the sun’s heat than natural landscapes. Combine a dense built environment with heat generated by human activities and you soon begin to see urban heat islands – inner-city zones where temperatures can be as much as 20 degrees F warmer than surrounding, vegetated areas.

Scientists have documented the urban heat island effect since the 1800s, but the details of exactly why, where, and how much surface temperatures vary within individual cities is less well understood.

“Urban heat is a complex subject, and there are different dynamics at play on any given street segment,” says Christian Braneon, a climate scientist at the NASA Goddard Institute for Space Studies, and co-leader of the study. “What’s the ratio of the building heights on the street to the width of the street? How wide are the roads and sidewalks and what are they made of? How much vegetation is there, how much shade is introduced by trees and buildings? This complexity makes it difficult to precisely say what the outside temperature might be somewhere in a city at a certain time of day without direct measurements.”

Now, for the first time in New York City, a new collaborative project aims to provide such street-level insights by heat-mapping parts of upper Manhattan and the Bronx. 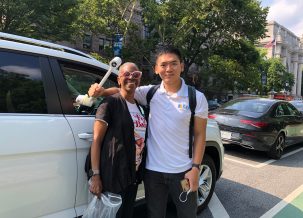 On Saturday, July 24, the project equipped some 40 participants with portable sensors and dispatched them across the study area in cars and on bikes to gather surface temperature data. To better understand how conditions vary throughout the day, each team traced the same route three times: once in the morning, afternoon and evening. The data collected will be used not only to create the most detailed heat map of the area to date, but to also help identify areas where environmental justice issues are a concern.

The data will be overlain onto maps of other indices like geographic features and land use patterns, says principal investigator Liv Yoon, a postdoctoral researcher at Columbia University’s Earth Institute. “But we will also plot axes of social inequities, such as race, income level, historical development patterns, and existing health disparities, in order to demonstrate the compounding vulnerability risk factors for, and consequences of, extreme heat and the urban heat island effect,” she said. 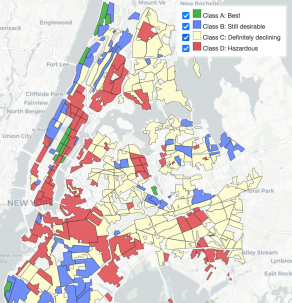 In cities across the U.S., racially and socioeconomically marginalized neighborhoods disproportionately bear the burdens of environmental degradation and the health problems associated with them. The historical record contains stark examples of how some neighborhoods were marginalized during New York City’s development. Urban planner Robert Moses prioritized highways over public transit, and often routed roadways through poor areas. From cholera to COVID-19, epidemics have historically hit NYC’s underprivileged neighborhoods hardest. And beginning in the 1930s, the practice of redlining – disinvestment in neighborhoods deemed “undesirable” – led to entrenched poverty and a lack of resources and opportunities.

“Many of the neighborhoods in our study area were redlined, and are still densely populated with mostly low-income Black and Brown residents,” says Yoon. “Redlining excluded these neighborhoods from real estate and infrastructure investment, contributing to disparities that still persist today, including being more vulnerable to extreme heat and related health risks.” 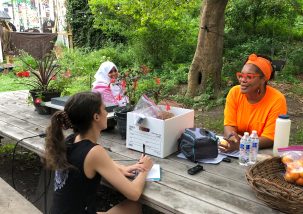 In the shadow of a highway overpass, Melissa Barber, co-founder of project partner South Bronx Unite, sits at a picnic table beneath a large tree in the María Sola Community Greenspace. “We were stunned when a judge said it was OK for FreshDirect to use a 21-year-old environmental impact statement to build a warehouse here,” says Barber. “So, the members of our community said, OK, we’ll conduct our own environmental studies. We’ll measure truck traffic, air quality, noise pollution… Then we can have a real conversation about ethics, about environmental justice in our community.'”

Encompassing the South Bronx, East Inwood, and Harlem, the northern portion of the study area focuses on such historically disenfranchised communities. The heavy traffic, polluting industries and lack of green space in these neighborhoods all contribute to the urban heat island effect, making their residents among the most vulnerable to heat health risks in New York City.

To effectively reach these communities, the study’s architects recognized the importance of working with local grassroots organizations. 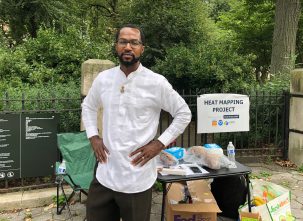 Dr Christian Braneon at the project’s Upper West Side basecamp at Sakura Park.

“We’re proud that we reached out to community-based organizations to partner with us in the early stages of formulating this study, and we’re fortunate that South Bronx Unite accepted our invitation,” says Braneon. “These folks are the experts on their community, and their input makes our study more robust. It’s important that we’re not treating the community like a laboratory with lab rats, but as equal partners.”

During the planning phase, South Bronx Unite helped recruit citizen scientists and design routes. Going forward, the group will be instrumental both in communicating the science to the community and helping put it into practice. Ultimately the goal is not only to better understand urban heat islands, but to begin to acknowledge the health and equity issues associated with them. Planting trees and creating green space, reducing traffic and industrial activities, and establishing community cooling centers can all help cool neighborhoods, address long-standing environmental justice issues, and improve health outcomes for local residents.

“We see how vulnerable populations in our community suffer from heat exposure, how the environment affects our wellbeing,” says Barber. “But studies like this one make us armed and dangerous. We can approach our elected officials and make a case that we need more green space, we need to reduce traffic, we need less pollution and cleaner air.” 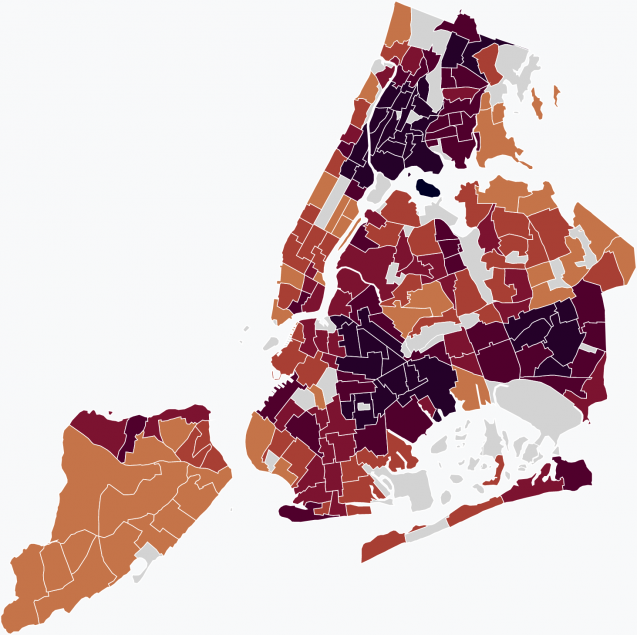 The clock is already ticking when it comes to adapting New York’s most vulnerable neighborhoods to extreme heat. According to the New York City Panel on Climate Change’s 2019 report, the annual number of days over 90 degrees F could more than triple in the city by the 2050s.

The researchers plan to publish their data and related materials this fall [see links below]. The project is part of a larger, multiyear heat-mapping initiative sponsored by NOAA’s National Integrated Heat Health Information System. Cities across North America have previously participated in the initiative; this is the first time it is taking place in New York City.

Very interesting research! I hope that the municipalities adopt your findings into their green planning processes.

Great example of how science and technology can be leveraged and democratized to impact all facets of our society. Well done!

Thanks Dan, I’m a fan of your podcast 5G Guys!

Last edited 1 year ago by Jenny Drake
Reply
wpDiscuz
5
0
Would love your thoughts, please comment.x
()
x
| Reply
This website uses cookies as well as similar tools and technologies to understand visitors' experiences. By continuing to use this website, you consent to Columbia University's usage of cookies and similar technologies, in accordance with the Columbia University Website Cookie Notice.Close