You Can’t Run From Climate Change, but That’s Not a Bad Thing 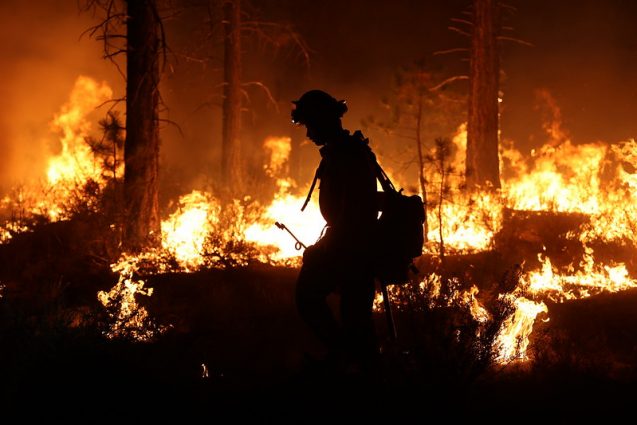 The Dixie fire in California burned nearly 1 million acres of forest—larger than the state of Rhode Island—from July to October 2021. Credit: CalFire

My parents are just two of the millions of people affected by wildfire and drought in California. This year alone, almost two million acres of the state have burned. Communities like that of my parents’ are plagued by constant threats of evacuation orders and dangerously poor air quality. It was more than understandable they’d be asking this question.

As someone who studied the environment for four years at the University of California Santa Barbara and is now a candidate for a master’s in climate science at Columbia University, I think they were hoping I would have a concrete answer for them—some knowledge of a thriving green utopia where they could pack up and move to as a respite from the dire situation in California. But as I sat there, taking longer and longer to formulate an answer, all hope of calming their fears disappeared into the air like wildfire smoke.

“There’s nowhere to go where climate change will be better,” I said. “It will always be there—it will just look different”. Consensus among climate scientists is concrete: the effects of climate change will intensify in every region on earth, although the specific impacts faced will be different from region to region.

Unhappy with this answer, and as if they were choosing to ignore it, my parents began listing different locations they’d already been considering.

“How about the East Coast? There are no fires there,” they offered.

“True,” I started. “But with sea level rise and extreme weather events like hurricanes, climate change has put a lot of places on the East Coast at risk of flooding.” A week later, Hurricane Ida validated my point as it made its way from the Gulf Coast to the northeastern US, killing at least 49 people in New York, New Jersey, Pennsylvania, and Connecticut.

“Hmm…” they paused. “Europe, then! There are never hurricanes there.”

“You’re right, but climate change is making the weather there a lot more extreme, too. There are heatwaves and fires in southern Europe and flooding and mudslides in northern Europe,” I pointed out. This summer, devastating floods killed 242 people in Germany, Belgium, Romania, Italy, and Austria, causing an additional 11 billion dollars in infrastructure damage. Wildfires in Turkey, Greece, and Italy killed 8, 2, and 4, respectively.

On they went, proposing locations from South America to East Asia, all while I ruefully extinguished each one. Eventually we reached the conclusion that maybe moving was not going to rid my parents of their climate concerns. There was nowhere for them to go that would ensure some other climate-change-induced event wouldn’t just pop up in its place. So, for now, they’re taping up the cracks under the doors, installing sprinklers on the roof, and hunkering down until the smoke settles and fire season concludes.

Because I study climate change, I am surrounded by stories similar to my parents — stories of the tragic ways in which people’s lives are already being upended by climate change. They are all too common. And as climate change progresses, they will increasingly become part of the shared experience of living on this earth.

This truth seems overwhelming, and at times it can be, but I still have immense faith in our future.

Because alongside stories of pain and displacement come stories of strength and solution.

Indigenous communities across North America are leading the charge in protesting new oil and gas projects. Their efforts have stopped or delayed the pollution equivalent of 400 new coal-fired power plants from being emitted into the atmosphere.

Experts are working hard to implement new forms of solar technology that have the ability to provide energy even after the sun sets, something traditional solar energy generation cannot do.

Because of this, I encourage everyone I know to discover their own space of engagement where ideas flow, imaginations brim, and futures brighten. Head to a community organizing event, join an online message board, or research climate solutions that interest you.

Looking back, I should have answered my parents’ question of, “Where can we go where climate change won’t be so bad?” with a resounding: “Forward!” We might be unable to run from climate change, but nothing is stopping us from standing strong and confronting it head on.

Alexandra Grant-Hudd is pursuing an MA in Climate and Society at the Columbia Climate School.

It’s a simple answer but it could be the most realistic. If you live in or close to a forest, get out. It has always burned in California and it always will no matter what. Obviously where the next burn will occur is unpredictable given that the population is spreading far and wide. Get into an air conditioned high rise within a city’s boundaries. I know it’s kind of crude to say so, but in California, that’s reality.