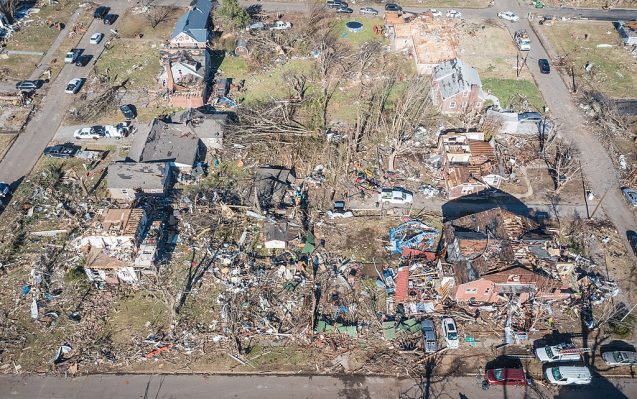 A neighborhood in Mayfield, Kentucky, on December 12. Photo: State Farm

The tornado outbreak — meaning a sequence or cluster of tornadoes that occur in close succession — may be one of the deadliest on record. There is little precedent for the 200-mile path that it carved through Arkansas, Illinois, Missouri, Mississippi, Tennessee, and Kentucky. The tornadic storm was also exceptionally strong, with winds that may have reached speeds of up to 205 mph. Meteorologists are still analyzing the data, but it may rank as an EF4 or EF5 storm on the Enhanced Fujita scale for tornado intensity, which ranges from 0 to 5.

To learn more about what factors contributed toward making this tornado outbreak so devastating, State of the Planet spoke with Chiara Lepore, who studies natural hazards at Columbia University’s Lamont-Doherty Earth Observatory. 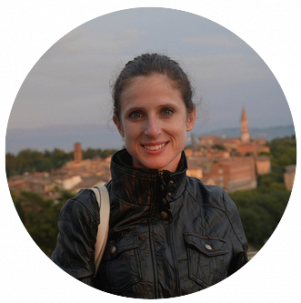 It’s important to note that it is too early to know exactly how many tornadoes have actually occurred, or know more about their intensity and the size or length of their paths, but it is clear from the preliminary reports that the characteristics and the destructiveness of this past weekend’s tornado outbreak have few and maybe no precedents.

From preliminary reports, it seems (and again, we should be cautious until the National Weather Service offices end their surveying work) that we are possibly looking at a tri/quad-state tornado, that stayed on the ground for possibly more than 200 miles, and the parent supercell that caused the main tornado outbreak has perhaps traveled for more than 600 miles. We are looking at multiple high-intensity tornadoes, greater than EF3 on the Enhanced Fujita scale.

These statistics are really not common in general, luckily, and definitely not common for this time of the year. Also this outbreak occurred further north than the typical area where winter tornado outbreaks occur.

What conditions contributed to the storm’s severity?

It was really — as some excellent scientists said before me — an example of “perfect storm” for severe weather.

Very warm moist air, with record-breaking high temperatures — in Nashville, for example, of 83 degrees Fahrenheit, and dew points in the 70s. The conditions were really not typical for mid-December or fall, but more spring-like. Coupled with very strong and sustained wind shear in place, the conditions were ripe for a severe weather outbreak, which NOAA’s Storm Prediction Center identified up to two days in advance. The strong low pressure system that was moving eastward interacted with these conditions, and pulled the warm, moist air further north. All these ingredients came together to produce mostly one very large intense storm. And the area with these conditions was very broad, allowing it to persist for a long time.

Besides the atmospheric conditions, this outbreak unraveled at night and went across highly populated areas, thus increasing its danger to humans.

Could there be a link to climate change?

Regarding the recent past, the changes to tornado occurrences have been “subtle.” We don’t see “obvious” trends in, for example, yearly totals. Up to before this outbreak, in fact, for 2021 we were well below average in terms of tornadoes events. Storm reports are known to have a very large year-to-year variability in tornadoes occurrences. What seems to have changed in the recent past is where these tornadoes occur — with a shift towards the eastern U.S. — and their “clustering” in time, with maybe fewer tornado days spread out along the year, but more tornadoes occurring when an outbreak occurs.

With respect to a possible link between climate change and tornadoes, instead, one of the major challenges in understanding future projections for severe storms is that the typical tools used to analyze how/when/where our planet will change in a warmer climate (i.e. climate models, such as those included in CMIP6) are not able to directly model severe storms, and hence tornadoes.

The spatial scale of severe storms — ones producing hail storms, tornadoes, and damaging straight-line winds — often represents only a fraction of the typical grid size of these models. The models, in a way, “cannot see them.”

What the models can reproduce are large-scale atmospheric quantities that, when they occur in certain combinations, are known to be conducive to severe storms.

In fact, climate model projections for the United States indicates that overall there will be an increase in the likelihood of conditions favorable to severe storms as our planet keeps warming. The main driving mechanism is warming temperatures and increasing moisture, which are some of the major ingredients in storm updrafts. A very recently published work by myself and many other co-authors has tried to quantify these changes based on CMIP6 data at the global scale. The range of expected increases in occurrence of conditions favorable to severe storms vary across our globe. For the U.S., we are looking at a 14-25% increase per every extra 1 degree Celsius of global temperature increase from now on. There is a big caveat, however: these are increases in the frequency of conditions favorable to severe weather occurrence, they are not actual storms, and only some of these storms will produce tornadoes. So the uncertainty is still large.

Preparing for Volcanic Eruptions at Okmok Volcano, Alaska
Subscribe
Login
0 Comments
Inline Feedbacks
View all comments
wpDiscuz
0
0
Would love your thoughts, please comment.x
()
x
| Reply
This website uses cookies as well as similar tools and technologies to understand visitors' experiences. By continuing to use this website, you consent to Columbia University's usage of cookies and similar technologies, in accordance with the Columbia University Website Cookie Notice.Close