From Barisal to Khulna 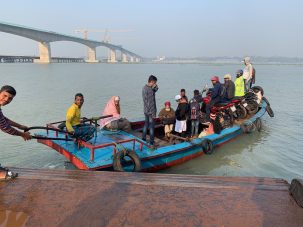 A small ferry carries people and motorcycles. A large new bridge is being constructed in the background.

Having finished servicing our two GNSS and RSET sites south of Barisal, we now headed west to Khulna to service the rest of these sites measuring land subsidence and sedimentation in the Ganges-Brahmaputra Delta. Many roads in Bangladesh radiate outwards from Dhaka. There aren’t as many good roads going east-west in southern Bangladesh.  That made for slow driving through rural Bangladesh. Near Pirojpur we had to cross the wide Baleshwar River by ferry.  From the ferry ghat (dock), I could see a large new bridge nearing completion. 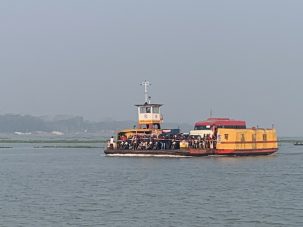 There is a tremendous amount of construction going on all over the country. With 7% economic growth per year for the last 4 years, the country is booming. New roads and bridges, a metro in Dhaka and new train lines are all underway as Bangladesh moves from being a low income country to a lower middle income country. 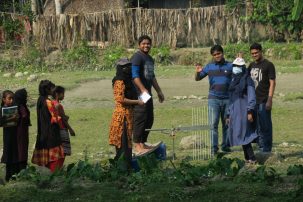 About halfway to Khulna we turned south to our sites at Sonatola in Sharankhola District. Here, we installed two GNSS stations. One is on top of a primary school, like many of our others, the other is installed on an RSET rod. The RSET (rod surface elevation table) measures sediment accumulation, elevation changes and shallow subsidence relative to the 80-foot rods we pounded into the ground. 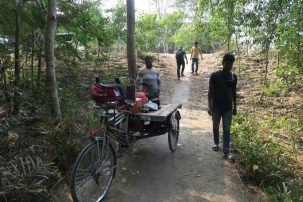 Loading the rickshaw van to take our equipment to the sites.

The GNSS will measure the absolute movement of an identical rod, giving us the deep component of subsidence. The two GNSS here have only been in place for 2.5 years, too short for reliable rate estimates, but they have consistently shown faster subsidence by ~1 mm/y on the building, which is less deeply rooted than the rod. 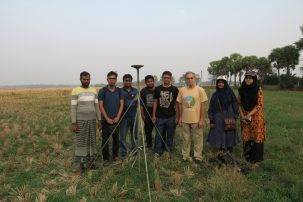 Our team by the GNSS antenna on the RSET rod. Bachchu, Sanju,Upal, Masud, Nahid, me, Pinky, Ira, with Chris still exploring the fields.

It required another ferry crossing to get to this land on the edge of the Sundarbans Mangrove Forest. We had to drive around the island using the road on top of the embankment, as the interior roads are not suitable for our vans. To get our equipment from the embankment road to the school and then the open field nearby, we hired a rickshaw van. 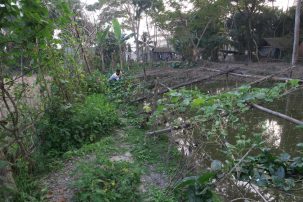 Bachchu’s garden, the part that was easy to walk through.

We were also met by Bachchu, the local farmer who allowed us to put our equipment in his rice fields and a member of the school council. We were both happy to see each other after over two years. The first site at the school, SNT1, looked pretty good. Although we lost contact in late October, the receiver continued recording data into December, when the battery got too low. 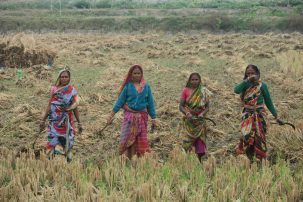 We then checked the grounding rod. To our relief, it was still in place, but the wire to it cut off. We only had to splice in a new piece of wire. SNT2, with its receiver box in Bachchu’s garden, was even better. The battery was low, but still running. We replaced the battery with a new one anyway to be safe. As we edged around the central pond of the garden, Bachchu gave me fresh cucumbers. This site went surprisingly smoothly, but the RSET team still beat us as we had two GNSS here. 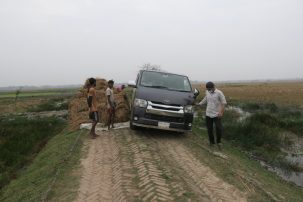 Our car squeezing by the freshly harvested rice while driving on the lumpy brick road.

Now, we reversed our route back to the main road and drove past the historic city of Bagherat, founded in the 1400s, to Khulna. We crossed the Pusur River that we will sail down in a few days and entered the city. As our driver did not know Khulna well, we followed Google’s directions to our hotel, which took us over an awful road. We slowly bumped over the road to our hotel. The long drive and diversion to the sites at Sonatola meant we arrived at 7pm — another 12-hour day. 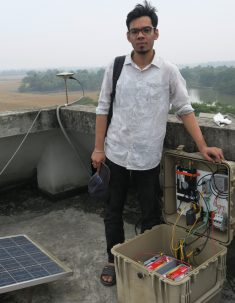 Sanju stands next to a working GNSS station. The antenna is behind him with the electronics and battery in the waterproof box.

Our site for the next day was a long drive to the southwest. We originally estimated three hours to get there, but wrong directions from Google and a terrible brick road at the end meant it took four. We ended up getting out of the car and walking to lighten the load for the car. Besides, we could walk faster than the car could go over this road. Still the long drive had more variety of rice, shrimp, and other crops in different stages of development that Chris took three times as many photos as in the previous three days combined. We could see the fall rice crop being harvested and the spring rice crop still in its seed bed, or just transplanted, and everything in between. The area of this site is primarily Hindu, and we passed many temples and shrines. 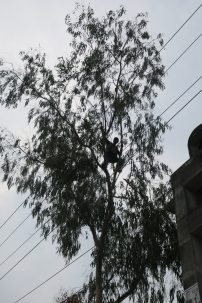 A local teenager climbed the tree blocking the antenna and cut down many of the offending branches.

After walking to the school, which doubles as a cyclone shelter, we met with the headmaster and went up to the roof. To our surprise, we found the receiver working and still recording data. When we changed the batteries, we found one of the old battery cases was split, so they weren’t long for this world. However, there was one tall tree that sprung up between the GNSS and the open field with the RSET. We want to try a new technique here called GNSS-IR (interferometric reflectometry). It uses the bounce from a river or the ground to determine its elevation below the GNSS antenna. It can potentially give us continuous measurements of the surface subsidence and seasonal variation, but not if a tree is blocking the view. 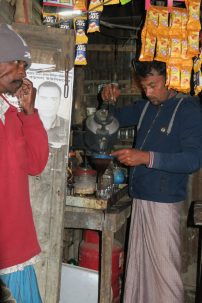 At the local shop on the corner, the owner makes cups of tea for all of us.

The headmaster initially suggested that we wait for when the electric company comes to trim trees near the power lines, but eventually, a local boy climbed the tree with a machete and started chopping off branches. We was able to get about three-quarters of the offending branches; the rest will have to wait for the electric company. For the first time, we were done well before the RSET team. We had tea and Sanju bought candy for all the local kids. We then leisurely walked back down the red brick road to the embankment road, talking with the farmers along the way. We left the RSET team and headed back, stopping for a quick lunch around 5 pm, just as the RSET team was finishing its work. 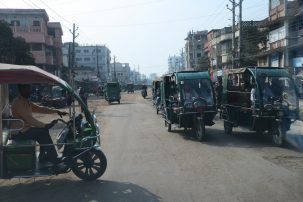 A street in Khulna with the type of green autorickshaw we took to the museum.

The RSET team was now done with their land sites, but our boat wouldn’t be ready until 7:30 pm. We had one site at nearby Khulna University. We finished it before noon. Sanju, Chris and I then went to the Divisional Archeological Museum to meet with the regional director, Afroza Khan Mita. When we arrived in an autorickshaw, we found her and her entire staff waiting in a line at the entrance to welcome us with flowers. 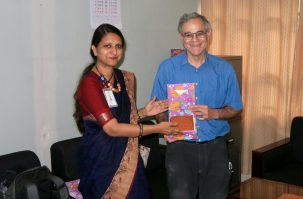 Afroza Khan Mita gives me a reproduction of a terra cotta tile as a present.

She then gave us a tour of the museum and we met in her office over tea and snacks. She organized a web seminar series I was part of on the archeology of deltaic ecology. It included both archeologists and geologists. With the people I met in this series, I hope to expand my measurements of subsidence to include more archeological sites. It was great to meet her in person and we are both excited about the potential collaboration. This meeting finished the third part of my trip. The final part will be reaching the remaining GNSS and RSET sites by boat.

Can you pls elaborate what was your mission? It seems to be a long term study but what are you measuring and for what purpose?