On Wednesday, the Columbia Climate School’s Jeffrey Schlegelmilch presented at a hearing of the House of Representatives Committee on Rules’ Subcommittee on Legislative and Budget Process. The hearing focused on “Using Budget Principles to Prepare for Future Pandemics and Other Disasters.”

Schlegelmilch is director of the National Center for Disaster Preparedness at Columbia University, where he and colleagues have led efforts to cope with and recover from the COVID-19 pandemic. 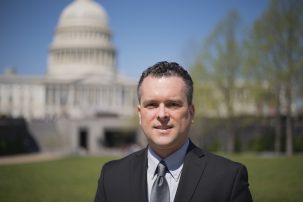 Jeffrey Schlegelmilch is director of the National Center for Disaster Preparedness at the Columbia Climate School.

At the hearing, Schlegelmilch spoke with members of Congress about challenges with disaster response budgeting, the need for better preparedness before disasters strike, and how disasters will only grow in intensity and frequency under climate change.

“Those that say we could not have seen COVID-19 coming are simply wrong,” he noted in his written testimony. “The severity, the disruptions, the politicization of the response, the inequities, and the pandemics’ persistence were all predicted in various reports, studies, and historical records of prior pandemics. The shortage of ventilators, personal protective equipment, and healthcare system capacity was the subject of numerous reports, including from the federal government…. We didn’t want to spend the money on what was needed, so we are dealing with the consequences now. And our response is a lot more expensive and a lot less effective as a result.”

Watch the hearing and read Schlegelmilch’s prepared comments — including his recommendations on enhancing disaster preparedness to save money and lives, and reducing government bureaucracy for swifter disaster response — below.

Testimony to the House of Representatives Committee on Rules’ Subcommittee on Legislative and Budget Process for the Hearing: Using Budget Principles to Prepare for Future Pandemics and Other Disasters

Thank you for the opportunity to testify before the Subcommittee today. In my role leading the National Center for Disaster Preparedness at Columbia University’s Climate School, as well as through other positions, I have dedicated my career to fostering the impact of disaster research in the fields of policy and practice. As everyone is well aware, the challenges we face from disasters are increasing in both severity and frequency. This is driven in part by human-caused climate change, as well as aging infrastructure, and a world that is growing smaller and more connected, virtually and physically. We are now entering an era in which disasters are the norm, and overlapping disasters such as hurricanes and wildfires during a pandemic are transpiring.

As we struggle with this evolving reality, our disaster readiness and response systems are working incredibly hard to meet this challenge, and the work of agency personnel, legislators, non-profits, academics and the private sector to this end should be lauded. But we find ourselves in a changing world, being pulled in different directions by different incentive structures, and seem to be chronically behind the accelerating curve of disaster impacts and their long tails of recovery.

We have forward-looking actions across government, such as FEMA’s Strategic Plan. In its latest iteration it focuses on issues of climate change and equity, among others. The prior iteration also included critical focuses like creating a culture of preparedness and simplifying bureaucracy as important nods to basic challenges in disaster management. Expansion of pre-disaster mitigation funding such as through the Building Resilient Infrastructure and Communities program, and new funding for infrastructure resilience embedded in the bi-partisan Infrastructure Investment and Jobs Act are also steps in the right direction.

At the same time, we see widening inequalities in who has access to recovery resources, and disparities in vulnerability that are too often predictable by socioeconomic status, race and ethnicity. We have a cacophony of roughly 90 assistance programs that can come from as many as 20 different agencies, with different triggers and rules. And that is just the federal programs. We also find ourselves pulled by incentives to focus on the most immediate assistance to the most visible, when in fact the investments in preparedness and mitigation are dramatically more impactful in diminishing the need for response and recovery funds.

Preparedness funding has ebbed and flowed over the years, peaking a few years after 9/11 and gradually decreasing with health security grant programs decreasing by a third to as much as half from their peaks, with similar reductions across all-hazards emergency management grant programs. The Bipartisan Commission on Biodefense (formerly the Blue Ribbon Study Panel on Biodefense) indicated the need for a more coordinated biodefense budgeting process, to avoid the fits and starts of our bio-security funding. At the same time, response spending has increased through the use of emergency supplemental expenditures, and later discretionary spending.

In researching the use of emergency spending for disaster response, I have been working with two colleagues, Dr. Ellen Carlin, an assistant research professor at the Center for Global Health Science and Security at Georgetown University, and Ryan Remmel, an undergraduate researcher based in the same center. In the decade after 9/11, we found that Congress gradually increased funding for emergencies and disasters, but relied largely on irregular supplemental appropriations bills hastily passed in the immediate aftermath of a crisis, with much of the enacted funding only tangentially related to disasters/emergencies they were meant to address. The framework changed with the Budget Control Act in 2011, which led to the emergence of a more focused and proactive funding model from 2012-2020, and lessened reliance on reactive supplemental appropriations. During this era, though, there were multiple years where the limited disaster relief spending enabled as part of the annual appropriations process under the Budget Control Act simply wasn’t enough to meet the need. Examples include 2013 with Hurricane Sandy, and FY 2018 had the California wildfires following a difficult hurricane season (Harvey, Irma, and Maria). Thus, in 2013 and 2018, and to a lesser extent in 2017 and 2019, Congress returned to its old approach, passing reactive supplemental appropriations bills funding “emergency requirements” to respond to these unforeseen disasters. And of course, COVID-19 spending breaks the charts. The question is whether these are exceptions to an otherwise stable need, and the current approach is working. Or if they are indicative of future events, and these are harbingers of more stressors to come. The answer is unequivocally the latter.

Those that say we could not have seen COVID-19 coming, are simply wrong. The severity, the disruptions, the politicization of the response, the inequities, and the pandemics’ persistence were all predicted in various reports, studies, and historical records of prior pandemics. The shortage of ventilators, personal protective equipment, and healthcare system capacity was the subject of numerous reports, including from the federal government, including congressional and oversight agencies after the first SARS outbreak in 2003, the emergence of a highly pathogenic avian influenza with pandemic potential in Asia in 2005, and after the emergence of a novel strain of influenza H1N1 in 2009. We didn’t want to spend the money on what was needed, so we are dealing with the consequences now. And our response is a lot more expensive and a lot less effective as a result. There were some investments made of course. And there has been benefit from those investments, but it is pennies on the dollar for what was called for, and what will undoubtedly come to be articulated in great detail in many reports and analyses to come.

As the impacts of climate change continue to grow, and more and more people are understanding it through the lens of disasters, we are again confronted with the ghosts of warnings ignored. These disasters will grow in intensity and frequency. They will cost more lives and livelihoods, and they will create new pressures on our economies, infrastructure and even our national security as parts of the world become increasingly unlivable in the coming generations. While quibbling over precise estimates of when, where, and exactly how much climate change is to blame, we are missing the greater truth that in broad strokes, disasters will unequivocally be more frequent, affecting more places, and with greater intensity.

Amidst all of this, we are overly dependent on a shadow budget for disaster response and relief that no one is planning. This budget is an ad hoc and non-strategic multi-billion, and with COVID-19, a multi-trillion-dollar reaction to disasters. It aligns with the electoral incentives to provide relief funding as fast and as plentiful as possible, and it also supports the immediate needs that can’t go unmet. But it fails to create lasting and strategic investments that can drastically reduce the cost to taxpayers, as well as the impacts on lives and livelihoods. And while it shows some leveling off in recent years, the spike in spending from COVID-19 and other disasters shows that any lull is temporary, and we need a better way ahead.

Resolving these issues will require rules that help to offset the incentives that steer us away from resilience, and satisfy our immediate and base concerns while leaving wide open the vulnerabilities for the next disaster.  With that in mind, I submit to you the following areas of action:

Thank you again for the opportunity to share these thoughts. I hope that they are useful to your deliberations and I look forward to any questions you may have along with any follow-on discussions. 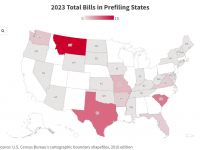 What Climate Resilience Policies Are in Store for State Legislatures in 2023?
Subscribe
Login
0 Comments
Inline Feedbacks
View all comments
wpDiscuz
0
0
Would love your thoughts, please comment.x
()
x
| Reply
This website uses cookies as well as similar tools and technologies to understand visitors' experiences. By continuing to use this website, you consent to Columbia University's usage of cookies and similar technologies, in accordance with the Columbia University Website Cookie Notice.Close