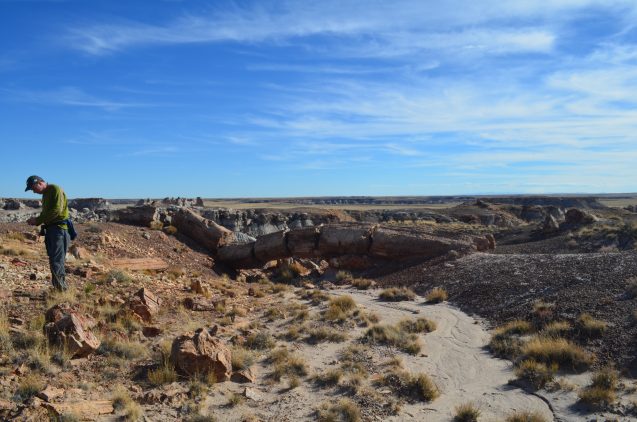 The continuation of drought conditions in the last two years has broken a record going back to 800 AD. Here, desert near Holbrook, Arizona. (Kevin Krajick/Earth Institute)

The drought that has enveloped southwestern North America for the past 22 years is the region’s driest megadrought—defined as a drought lasting two decades or longer — since at least the year 800, according to a new study in the journal Nature Climate Change.

Thanks to the region’s high temperatures and low precipitation levels from summer 2020 through summer 2021, the current drought has exceeded the severity of a late-1500s megadrought that previously had been identified by the same authors as the driest in 1,200 years.

University of California Los Angeles geographer Park Williams, the study’s lead author, said with dry conditions likely to persist, it would take multiple wet years to remediate the effects. “It’s extremely unlikely that this drought can be ended in one wet year,” he said. The study was coauthored by Jason Smerdon and Benjamin Cook of the Columbia Climate School.

The researchers calculated the intensity of droughts by analyzing tree rings, which provide insights about soil moisture levels each year over long time spans. They confirmed their measurements by checking findings against historical climate data. Periods of severe drought were marked by high degrees of soil moisture deficit, a metric that describes how much moisture the soil contains compared to its normal saturation.

Since 2000, the average soil moisture deficit was twice as severe as any drought of the 1900s, and greater than it was during even the driest parts of the most severe megadroughts of the past 12 centuries, say the authors.

Studying the area from southern Montana to northern Mexico, and from the Pacific Ocean to the Rocky Mountains, the researchers discovered that megadroughts occurred repeatedly in the region from 800 to 1600. Williams said the finding indicates that dramatic shifts in water availability happened in the Southwest well before the effects of human-caused climate change became apparent in the 20th century.

Existing climate models have shown that the current drought would have been bad even without climate change, but not to the same extent. Human-caused climate change is responsible for about 42 percent of the soil moisture deficit since 2000, the paper found.

One main reason climate change is causing more severe droughts is that warmer temperatures are increasing evaporation, which dries out soil and vegetation. From 2000 to 2021, temperatures in the region were 0.91 degrees Celsius (1.64 degrees Fahrenheit) higher than the average from 1950 to 1999.

“Without climate change, the past 22 years would have probably still been the driest period in 300 years,” Williams said. “But it wouldn’t be holding a candle to the megadroughts of the 1500s, 1200s or 1100s.”

As of Feb. 10, according to the U.S. Drought Monitor, 95 percent of the western United States was experiencing drought conditions. And in summer 2021, according to the U.S. Bureau of Reclamation, two of the largest reservoirs in North America—Lake Mead and Lake Powell, both on the Colorado River—reached their lowest recorded levels since tracking began.

Regulators have continued to implement water conservation measures in response to water shortages caused by the drought. In August, federal officials cut water allocations to several southwestern states in response to low water levels in the Colorado River. And in October, California Gov. Gavin Newsom declared a drought emergency and asked Californians to voluntarily decrease their water usage by 15 percent.

Williams said such initiatives will help in the short term, but conservation efforts will have to extend beyond times of drought to help ensure people have the water they need as climate change continues to intensify dry conditions.

Adapted from a press release by UCLA.

I live in the UK & this is the first time I’ve heard about this drought, never mind that it’s lasted for so long. Very disturbing and almost as disturbing that it’s not international news. Personally, I believe the true state of the global climate & natural habitat destruction (with the multiple negative consequences) are being downplayed. If I had children, I’d be very worried about their and their children’s futures. As it is, I feel sad & angry that people are still not really aware of the seriousness of these issues and that we’re close to running out of time to stop the inevitable end of civilization in its present form. It’s the minority whose seeming endless, and ruthless, lust for power and money that’s responsible for the planet’s ruination. Kids, you have to challenge and assert, no, insist, on yours and the earth’s rights for any type of future at all. Websites like this are so necessary to educate and alert ordinary people as to what’s happening….. everywhere.

I am a young person that works to fight climate change through conserving public lands and the mature and old-growth forest they hold. Some people dont realize that despite big trees being a concentrated in a small fraction of the land area, these older trees hold more than 40% of the forest’s carbon. 65% of that carbon is lost when they are logged, turning forests from carbon sinks to sources.

This article and comment was a powerful reminder that I shouldn’t feel alone in taking climate change seriously despite all the people who deny it or try to justify logging old growth for financial or self-gratifying reasons. Thank you.

If you are curious the organization I work for is called Kentucky Heartwood. We are a grassroots org that started from a radical group of forest protection activists in the 90’s.

Don’t forget that the CO2 sink of the boreal Forest is larger thanks to an active and responsible forestry.

IBFRA published a study on that earlier this year.

Responsible forestry? Such as that which has set the stage for ‘forests of gasoline’ throughout the American West and that is responsible for blowup (just this summer in New Mexico) APPROACHING HALF-A-MILLION ACRES?

I am a climate believer–having covered, as a reporter, much of the research at Los Alamos National Laboratory, but, Chris, despite media headlines, there is not much evidence that this MEGADROUGHT is climate-change driven. This region–where my family has lived for 7 generations–is prone to SEVERE, SEARING DROUGHTS of 40, 50, 60, 70, 80 years duration. Sadly, with or without climate change, THAT APPEARS TO BE HAPPENING AGAIN. And let me remind you (as a reporter who also has written on mega-fires, and seen her fair share of them), the fires being produced in this MEGADROUGHT, in timber that has been MISMANAGED for 120 years (the timber situation, again, has little to do with climate) are now being called “forests of gasoline” and their incineration in fires, in megadrought, is taking our OLD GROWTH TREES–what few that timber MISMANAGEMENT HAS LEFT–as quickly as all the others. So, let me warn you ASSUMING THIS IS CLIMATE CHANGE–as Big 6 Media seem determined to “educate” you to believe–may mean we miss real opportunities to understand what is really happening.

I live in the Southwestern part of the US. Specifically, in Southern Nevada/NV (I live in a small, rural town in the Mojave Desert) with my family and have called it home for almost 9 years. I’ve known about the drought in my state for a long time [and so do most Nevadans]. My state has been in a drought for 22 years. Last year, 2021, was not only very hot in the Southwestern US but the Western US (including the Pacific Northwest) and Western Canada.

I’ve noticed that where I live [that] for the past 2 or 3 years that it’s getting hotter a lot sooner than it normally does. I know that the megadrought will most likely last for a very long time. I’m not surprised when I read online articles about the megadrought, Lake Mead (by Vegas) and Lake Powell (Southern Utah/UT) water levels dropping. It’s nothing new to Americans like myself who live in the drought stricken parts of the US.

What is happening in the Western US, the megadrought, should serve as a warning to the rest of the world that human driven climate is real. I honestly wish that megadrought would end soon but it won’t. The affected parts of the US need to adopt even stricter water conservation measures or laws than in the past in order to make sure there’s enough water for everyone.

I live in the Phoenix area. This is real and a huge concern. I am baffled that it isn’t bigger news. It seems like most people want to ignore this and hope it goes away. The frenzied building and expansion in the Phoenix area is extremely concerning because this all requires more water. It is predicted that the Phoenix metro area will double in population in the next few years. People better start bringing their water with them!

Maybe it would help if MEDIA WOULD REPORT ON DRUGHT by focusing other than on bodies surfacing at Lake Mead–by any journalistic measure, TRIVIA. Of note, do you know where Phoenix got its name? That happened when settlers in about 1840 realized they were BUILDING ON THE RUINS OF SOME LONG-AGO CIVILIZATION and named the city for the mythical bird arising from the ashes of another. Those people were the Hohokum–who diverted water from the Salt River Valley(!) and how were forced into a mass exodus by the 1280 to 1350 drought. Suggest you read my paper: THE SOUTHWEST: GROUND ZERO FOR GLOBAL WARMING. An updated version is in progress, but it has the data on available water and a look at the denial to which you refer.

Have the authors not taken into consideration the immense increase of population over the last century depleting the water sources thereby causing lack of soil moisture for evaporation? That’s not CO2 caused climate change. That is man’s mismanagement of the land and its resources.

Kelly,
Why could it not be “both-and” rather than “either-or?”

YOU SO NAILED IT! And from my view, as a reporter, as a water activist and as someone who served on the Sierra Club’s POPULATION ISSUES SUBCOMMITTEE before they MOVED TO SILENCE ON THE SUBJECT BECAUSE IT’S LINKED TO IMMIGRATION, to ignore the Southwest’s population is irresponsible in the extreme. After all, 13.7 m.a.f. of Colorado River water divided among 14 million in 1950 is a lot different than a MUCH SMALLER COLORADO TODAY, and as little as 5 m.a.f. having to be divided by a population approaching 50 million!