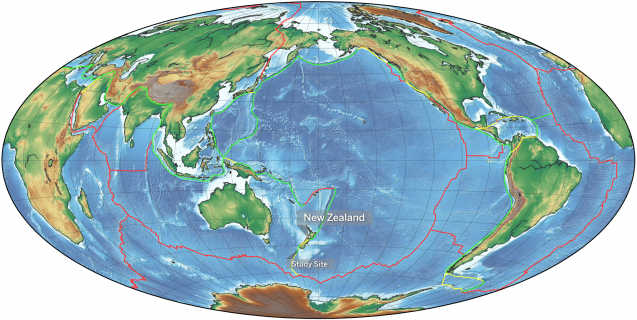 The edges of Earth’s tectonic plates, centered over the Pacific Ocean. Colors indicate whether plates are scraping past (yellow), diving under (green), or pulling away (red) from one another. Study site near New Zealand marks the location of a newly forming subduction zone. (Brandon Shuck/University of Texas Institute for Geophysics)

One longstanding enigma in geology is how one tectonic plate can break Earth’s rock-hard shell and begin diving under another in the process known as subduction.

Now, a new study describes how a small break in one tectonic plate was squeezed and pulled over millions of years until it unzipped and set in motion a runaway geologic process. The study, of an emerging subduction zone off New Zealand, was just published in the journal Nature Geoscience.

“We now know how subduction nucleated and how fast it’s growing,” said lead author Brandon Shuck. “That’s important to know because subduction is the main driver of plate tectonics. It builds mountains, forms new oceans and drives chemical cycling from the deep earth all the way to the atmosphere.” Shuck did the work for his doctoral thesis at the University of Texas Jackson School of Geosciences; he is now a postdoctoral research scientist at Columbia University’s Lamont-Doherty Earth Observatory.

Earth is believed to be the only planet in the Solar System to undergo subduction, which is key to the cycling of carbon that makes life possible here. “We do believe that subduction didn’t always happen on Earth, so understanding how [it] initiates today is a critical step to understanding how our world eventually became a habitable planet,” said the study’s coauthor Harm Van Avendonk, a senior research scientist at the University of Texas.

The research began in 2018 aboard Lamont-Doherty’s research vessel Marcus G. Langseth off New Zealand, where Shuck and his shipmates endured weeks of bad weather to gather detailed seismic images of the seafloor.

Onshore, Shuck matched the images with rock samples from other ocean expeditions. This provided a geologic timeline to reconstruct an unzipping plate. According to his reconstruction, a small break appeared in the Australian plate around 16 million years ago, which slowly grew as it collided with other tectonic plates. When the break had unzipped far enough, the heavier portion of the plate broke through the earth’s rocky shell (known as the lithosphere), setting it on a downward conveyor that has continued for the last 8 million years. Today, the new subducting margin is about 300 miles long. 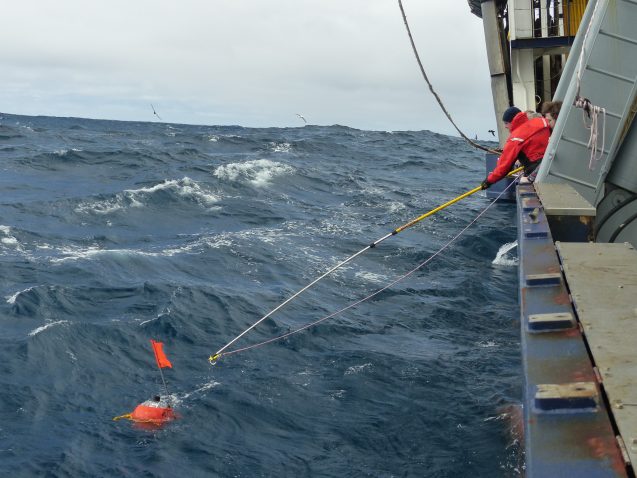 A researcher recovers a seismic imaging sensor off New Zealand, 2018. The sensors enabled the creation of detailed geologic images of the newly forming subduction zone. (University of Texas Institute for Geophysics)

“That’s pretty small at the scale of global tectonics,” Shuck said. “But it’s going to keep growing all the way down to Antarctica.” he predicted. “Once it gets that big, more than 1,000 miles long, it could change the motion of neighboring tectonic plates.”

For now, the only sign on the surface is a handful of volcanoes near New Zealand’s South Island. Most emerged in the last hundred thousand years. They are likely to grow into a longer volcanic chain as the split spreads south in the future, Shuck said.

Shuck’s study reconciles two opposing ideas about how subduction starts: with the gradual back and forth of plates bumping against one another, or by plates spontaneously and rapidly collapsing under their own weight. The new research suggests that sometimes the two ideas might both be part of the equation.

“The work shows that there may, instead, be multiple scenarios driving subduction initiation,” said Fabio Crameri, a Swiss geophysicist who wrote a Nature Geoscience commentary accompanying the study.  “Even if the same scenario isn’t true for every subduction zone, their model challenges our current systems for classifying subduction zone initiation and highlights the need for 4D modelling.”

The research was supported by the U.S. National Science Foundation.

Adapted from a press release by the University of Texas Jackson School of Geosciences.