Learning From Tree Rings: An Interview With Nicole Davi

This story is part of a series celebrating the work of women at the Columbia Climate School, in honor of International Women’s Day on March 8, 2022. Read more about the day and our related blog posts here. 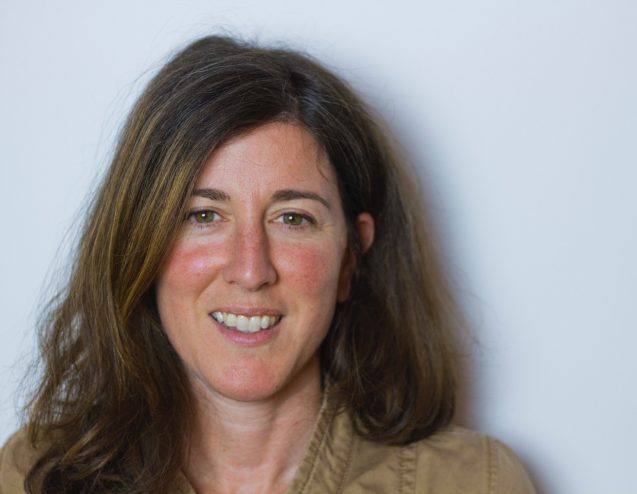 When I was very young, probably 6 or 7, I remember learning about tree rings and counting the number of rings to determine the tree’s age. However, it was not until 22, my current age, that I learned how much more, beyond just ages, trees can tell us. Not only are they our lifeline, supplying oxygen and other important environmental services we need to survive, but trees are our record-keepers.

The science of dendrochronology was founded by Andrew E. Douglass in the late 19th century, and refers to the technique of dating events and environmental change by using the characteristic patterns of annual growth rings in timber and tree trunks. Douglass noticed a relationship between the size of the tree rings and climate factors, such as moisture and elevation. This led him to invent a technique called cross-dating, which involves matching patterns from one tree to another.

Today, tree-ring analysis is not only used to determine climate conditions of the past, but also to predict future patterns.

Nicole K. Davi, is a scientist of dendrochronology at the Tree Ring Laboratory at Columbia University’s Lamont-Doherty Earth Observatory, a professor of environmental science at New Jersey’s William Paterson University, and a great lover of science. Her research focuses on developing and interpreting paleoclimatic records in order to understand climate change over the past 2,000 years. Paleoclimatology data is derived from natural sources such as tree rings, ice cores, and ocean and lake sediments and can help scientists understand what the Earth’s past climate was like and why.

To learn more about the scientific field of dendrochronology and why making it accessible to all is important, I met with Davi via Zoom in early February of this year. Below is an edited version of that conversation.

Where and when did you first learn about dendrochronology?

I was an environmental science major, so I had a really broad perspective on environmental issues, but I hadn’t learned too much about paleoclimatology [the study of ancient climates].

Believe it or not, working at the Tree-Ring Lab was my first job out of college. I started there as a technician. After completing my interview with the director of the laboratory at the time, I just thought it was amazing to learn so much about environmental conditions from old-growth forests growing in remote areas.

Now you’re a paleoclimate scientist and heavily involved in the science of dendrochronology. What do you find most interesting about your work?

There are so many things — the questions that we’re asking, the applications, the potential information and its usefulness to decision makers. But I think what’s most interesting for me is to develop projects that are useful to communities.

How can dendrochronology help inform future decisions, especially around climate and the management of natural resources?

There are two questions that we often ask using tree ring records. One is, how has our climate varied in the past several thousand years?

A really good example of how tree-ring records can be applied is the Colorado River Compact (1922). Seven states (Arizona, California, Colorado, Nevada, New Mexico, Utah, and Wyoming) got together and decided how to divvy up the Colorado River’s water among the states, by looking at maybe only 20 or 30 years of stream flow data. And it looked good — they had enough water to split up. But when you analyze Colorado River stream flow using tree rings and reconstruct the flow for 400 or 500 years, you can see that the period just before the Compact had really high flow. So, the states overcommitted water resources. In the decades that followed, the river’s flow had extended periods of much lower flow rates.

From tree ring records we’ve also learned that droughts can last a long time. A really long time, which human records might not capture. That’s important for understanding how to manage our natural resources effectively.

Another question we ask is, how do individual tree species respond to climate? Are they doing well? Are they growing worse? What might forests look like in the future?

There are a lot of factors that can affect how trees grow, so isolating the climate signal is important. 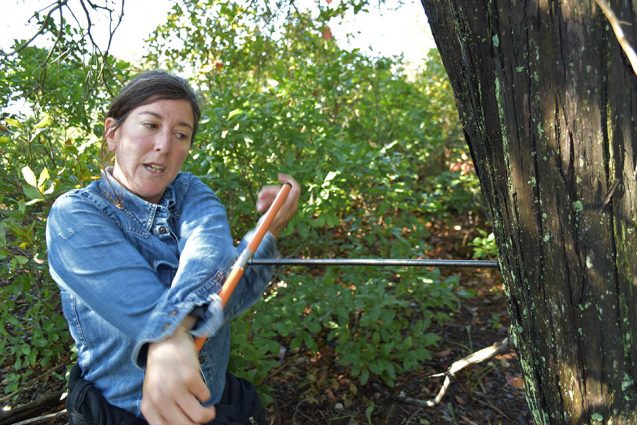 Davi forces a specialized augur into a red cedar; the bit is hollow, allowing her to core a cross section of growth rings without harming the tree.

How are the forests responding to climate change?

It can be very site-specific. Warming conditions and more rain will benefit some species and not others. It really depends on what different tree species need. We don’t have all the answers to that.

For example, I work in coastal forests. Most of the adult cherry trees in my sites are dead or dying, so I think they’re not able to tolerate increasingly salty conditions. In the Catskills, there are beech trees with beech bark disease, which is caused by an invasive insect that leaves a tree vulnerable to a fungus. Because of this disease, those forests are going to change. Those trees are going to be gone in 10 years. I can’t imagine they would survive. So, what will come up [instead]? That’s an open question.

What do these forest changes mean for humans? Can you talk more about our connections with trees?

Our connections to trees is an interesting question. Very often, I study forests and climate — I think about people and how people are impacted. In terms of climate extremes, how do we respond? You also have to think about the resources people have.

But what do forests mean to people? This is a topic that’s really exploding. There are  lots of studies that show how important it is for people to spend time in nature and in  forests — how much it benefits people emotionally. There is much value there that isn’t yet understood.

To me, the value is also cultural —being connected to a forest that’s been growing for hundreds of years, knowing that it is there. Being able to experience and explore that forest and think about how the landscape has changed, and consider how the people have related to that forest. It’s amazing. That value — we can quantify it, but it’s hard.

Your love for trees is evident. If you had to pick a favorite tree species, what would it be?

Species?! Oh my god. That’s like picking a favorite dog or something. I can’t do it!

I love to work with conifers. They’re soft wood, so they’re not too hard to core.

I live in Nyack, NY, where there’s a state park with hundred-foot [tall] cliffs, and at the top, there’s a little cedar tree. I can see that tree from so many places in town, and even from the Tappan Zee Bridge. I love that. It’s a sentinel up there. My favorite tree in this area.

You mentioned that education is really important to you, and you are a principal investigator for the TREX project. Can you talk more about this project and your interest in undergraduate education?

I didn’t ‘find’ the sciences until I was a senior in college, when I took a course in ecology. And it was my language, it all made sense. So, I decided to switch my major and stay an extra two years.

I try to make what I do accessible for large audiences, and it should be accessible. Especially because there’s so much misunderstanding and false information out there around climate change. Everyone is familiar with trees and most people are familiar with tree rings. They’re very intuitive — this idea that ring width varies with climatic conditions is just intuitive. People understand that. Even very young kids understand that.

Amazing article. Extremely proud of you Nataley. Looking forward too reading more by you.