In the Southern Ocean, the sea-ice cover surrounding Antarctica gradually expands during the largely sunless months from March to October. But then, as daylight ramps back up, it retreats at a much faster pace, most dramatically around December, when Antarctica experiences constant daylight. The pattern has long been consistent, unlike other sea-ice conditions, which may vary widely from year to year.

New research in the journal Nature Geoscience explains this asymmetry: It turns out to obey a simple set of conditions.

“In spite of the puzzling longer-term trends and the large year-to-year variations in Antarctic sea ice, the seasonal cycle is really consistent, always showing this fast retreat relative to slow growth,” said lead author Lettie Roach, who conducted the study as a postdoctoral researcher at the University of Washington. “Given how complex our climate system is, I was surprised that the rapid seasonal retreat of Antarctic sea ice could be explained with such a simple mechanism,” said Roach, now a research scientist at the NASA Goddard Institute for Space Studies and Columbia University’s Center for Climate Systems Research. 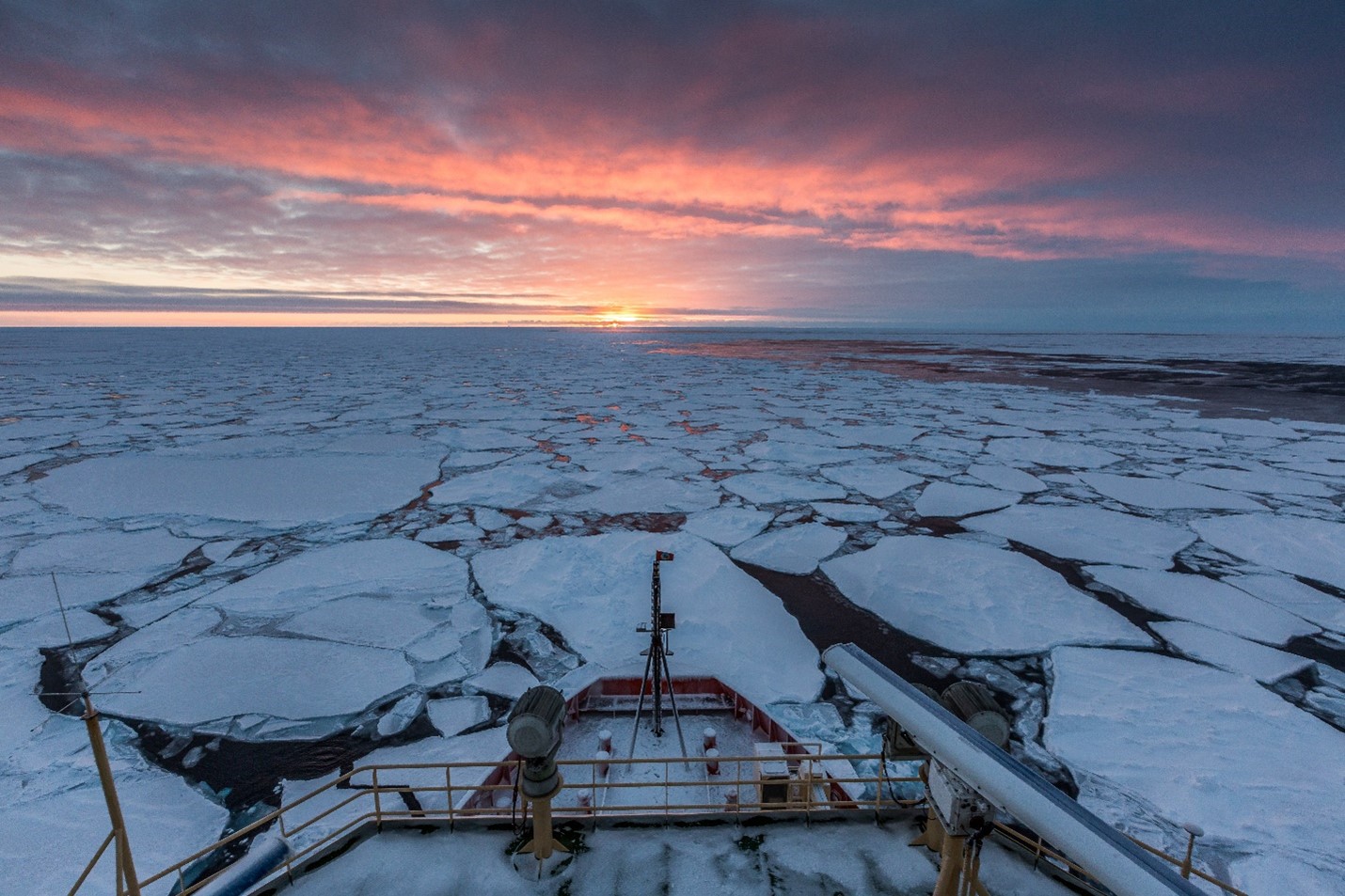 A research vessel in Antarctica in June 2017, the first day researchers saw the sun rise above the horizon after weeks of polar darkness. New research shows that solar radiation drives the relatively fast annual retreat of sea ice around Antarctica at the end of each calendar year. (Ben Adkison)

During the Southern Hemisphere’s dark months, the ocean’s total ice area can increase six times over, growing larger than the land area of Russia. Previous studies have explored whether wind patterns or warm ocean waters might be responsible for the much more rapid pullback. The new study shows that, just like a hot summer day reaches its maximum sizzling conditions in late afternoon, an Antarctic summer hits peak melting power in the austral midsummer, accelerating warming and sea ice loss. Changes in temperature and sea ice are slower during the rest of the year.

The researchers investigated global climate models and found that they reproduced the quicker retreat of Antarctic sea ice. They then built a simple physics-based model to show that the reason for the rapid recession of the ice is the seasonal pattern of incoming solar radiation.

While the pacing of annual ice formation and retreat is consistent, the overall extent of Antarctic ice cover has inexplicably seesawed over recent decades, even though the globe as a whole is warming. This is in contrast to the Arctic Ocean, where the seasons of ice advance and retreat are more similar to each other, but overall ice cover has gradually decreased since the 1970s with global warming. Researchers are still working to understand the inconsistencies at the poles and better represent them in climate models.

The researchers are now exploring why Arctic sea ice doesn’t follow the Antarctic pattern, instead each year growing slightly faster over the ocean than it retreats. Because Antarctica’s geography is simple, with a polar continent surrounded by ocean, this aspect of its sea ice may be more straightforward, Roach said.

“We know the Southern Ocean plays an important role in Earth’s climate. Being able to explain this key feature of Antarctic sea ice that standard textbooks have had wrong, and showing that the models are reproducing it correctly, is a step toward understanding this system and predicting future changes,” said coauthor Cecilia Bitz, a University of Washington professor of atmospheric sciences.

Other coauthors of the study are Edward Blanchard-Wrigglesworth of the University of Washington; Ian Eisenman at Scripps Institution of Oceanography; and Till Wagner of the University of Wisconsin-Madison. The research work was funded by the U.S. National Science Foundation, the U.S. National Oceanic and Atmospheric Administration, and the U.K.-based Scientific Committee on Antarctic Research.