Other Complex Mechanisms Must Have Affected Climate, Say Scientists

Can iron-rich dust fertilize the ocean, stimulate algae growth, and thus capture carbon dioxide from the atmosphere? This process, which appears to have taken place in some parts of the world in the past, could possibly help keep the planet cool; some scientists are asking the question with an eye to possibly geoengineering the oceans to soak up humanity’s emissions.

In a new study, an international research team used deep-sea sediment cores to investigate whether this effect took place in the southern polar region during past ice ages. They found that although iron-rich dust input from land to the ocean was high during these cold, dry times, there was no evidence of fertilization. Rather, algae production, and thus uptake of carbon dioxide, was higher during warm periods, when dust input was low. This means other, less obvious forces must have been controlling carbon uptake, at least in this region. The researchers report their results this week in the journal Nature Communications.

Changes in the concentration of atmospheric carbon dioxide (CO2) are considered to be the main cause of past climate changes, and likely future ones. One long-standing debate among climate scientists is whether the roughly 30 percent lower CO2 content of the atmosphere during ice ages was caused by iron fertilization. Supporters of the idea argue that iron-rich dust is carried into the ocean by wind and water, where it stimulates the growth of algae that absorb more CO2. As algae die and sink  into the depths, the CO2 is trapped. But although there is clear evidence that dust input increases during ice ages, the fertilization idea has been controversial, at least for the Antarctic Ocean. 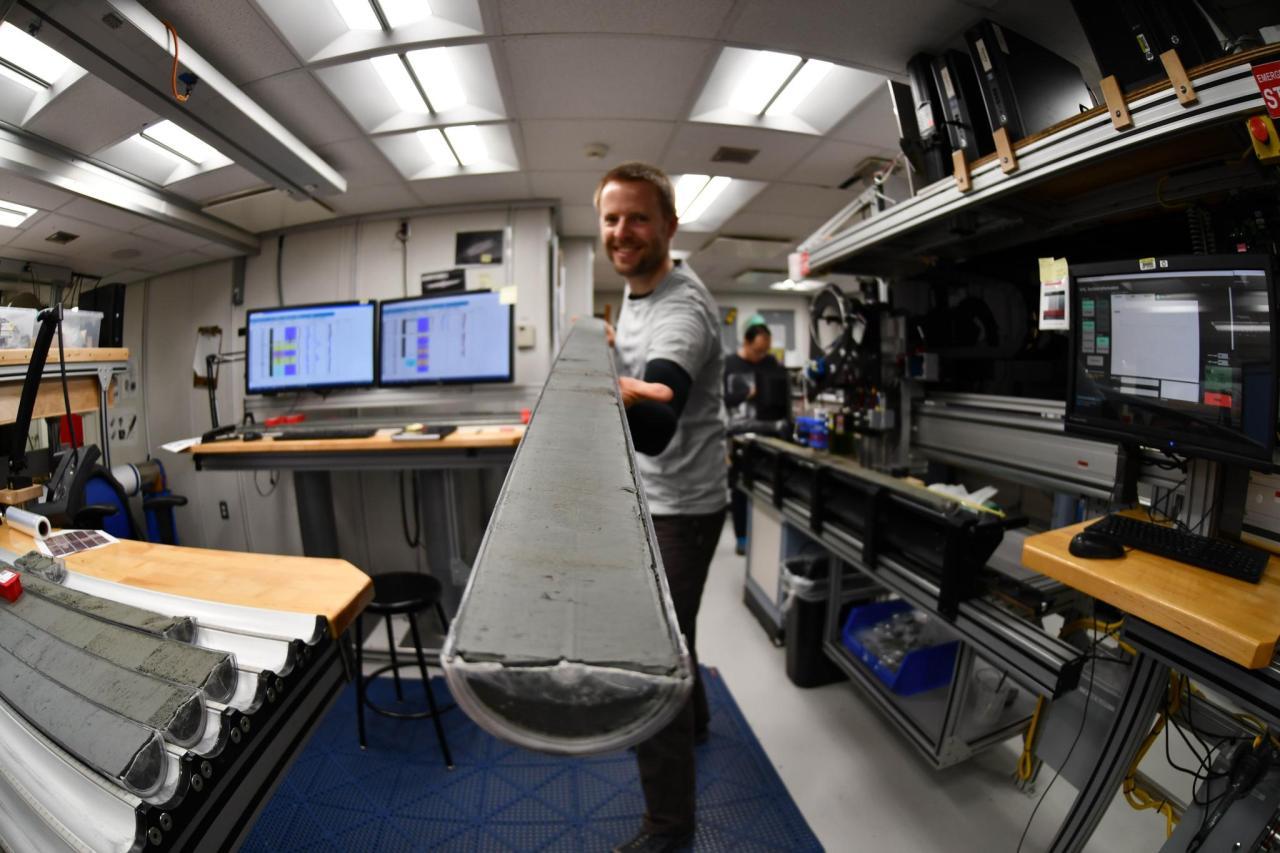 Deep-sea cores taken from off Antarctica show that, unlike some other regions of the world, dust swept from land into the ocean during ice ages did not increase carbon uptake from the air. Here, aboard the drill ship JOIDES Resolution, a team member displays a core. (IODP)

In the new study, 38 researchers from 13 countries investigated the question as part of the International Ocean Discovery Program. They traveled in 2019 to the Scotia Sea, off Antarctica, on the drill ship JOIDES Resolution. There, they spent two months bringing up cores from the seafloor at depths of 3,000 to 4,000 meters. The chief scientists on the cruise were lead author Michael Weber of the University of Bonn and Maureen Raymo of Columbia University’s Lamont-Doherty Earth Observatory. The researchers collected the highest-resolution and longest climate archive ever obtained near Antarctica and its main dust source, Patagonia.

In one 200-meter-long core labeled U1537, the climate history of the last 1.5 million years was recorded in detail. Ice cores from Antarctica itself cover only the last 800,000 years, so this allowed the scientists to greatly extend the record. Both the ice cores and deep-sea cores show that dust deposition during the ice ages was five to 15 times higher than during warm interglacial periods.

However, the researchers found no evidence of a fertilization effect during repeated ice ages. Rather, algae production, and thus carbon sequestration, was higher in warm periods, when dust input into the Scotia Sea was low. This means that during cold periods, other processes must have prevented CO2 captured in the ocean from escaping back into the atmosphere and triggering warming. The factors, the scientists say, could include more extensive sea-ice cover, more intense stratification of marine water layers, and reduced dynamics in current systems.

The opposing trends in dust deposition and oceanic productivity were accompanied by gradual long-term changes in the climate system in the southern polar region. The study found that biological production was particularly high during the interglacial periods of the last 400,000 years. But during the so-called mid-Pleistocene transition 1.2 million to 700,000 years ago, warm-period production differed little from that of cold periods. As the transition progressed, the dust input covered larger and larger areas in the Southern Hemisphere.

“There is indeed evidence of a fertilization effect during the ice ages in cores outside the Antarctic zone,” said Weber. “However, our study shows that atmospheric CO2 fluctuations do not depend solely on iron fertilization from dust deposition. In the Antarctic Ocean, it is rather a complex interplay of a westerly wind system, productivity, and feedback with sea ice. This relationship has been consistent over the last 1.5 million years.”

Scientists contributing to the study came from other institutions in Germany, the United Kingdom, Australia, Argentina, China, Brazil, Spain, Switzerland, the Netherlands, Japan, Denmark, India, Korea and the United States. Sidney Hemming and Trevor Williams of Lamont-Doherty were among the coauthors. Funding was provided by the German Research Foundation, the British Natural Environmental Research Council and the U.S. National Science Foundation.

Adapted from a press release by the University of Bonn.