Tea Gardens to the Rescue

We are installing magnetotelluric (MT) stations around northeast Bangladesh to image deep below the surface. Each is out for a few days at a time. They use the sun’s radiation to probe beneath the surface of the earth. We need to lay out long lines of electrodes in the north-south and east-west directions to record the electric field plus three magnetometers pointing north, east and vertical. The instruments are very sensitive to pick up effects from kilometers below the surface and they need to be far away from any power lines. In densely populated Bangladesh, this is difficult to do.  Power lines and roads crisscross everywhere. We hope to image the depth to the megathrust fault, with the potential for generating a large earthquake, and the thickness of the sediments. Perhaps we can image the base of the crust, but that is less likely with interference. Because we cannot get far enough away from electric lines, we are giving up on using harvested rice fields. 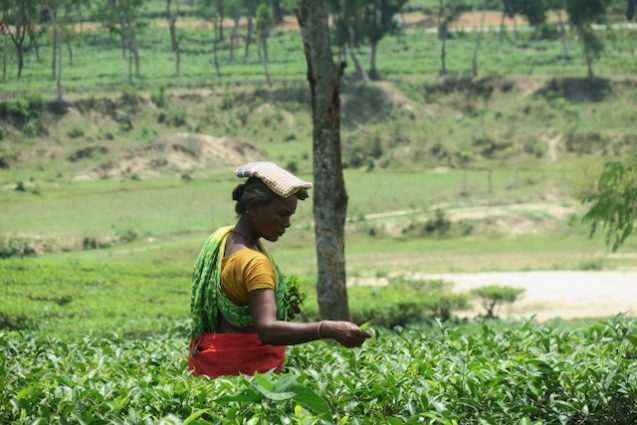 A woman picking tea leaves at the Surma Tea Garden. The plants are kept waist-high for easy picking.

The first site we tried in Sylhet, as northeast Bangladesh is called, was a place where we previously had a seismic station installed. It is on a tea garden (plantation) on the flank of an anticlinal hill. Sylhet is where the sediments of the Ganges-Brahmaputra Delta are folded up into hills by the long-term movement of the megathrust underneath. Tea plants grow in well-drained soils, so they are mainly planted along the flanks and sometimes tops of anticlines. Only near the Indian border, where the land slopes upward, does tea fill the valleys as well. Sylhet, with its tectonically active hills and valleys, is where most of the tea in Bangladesh is grown. The geology and tectonics are also why we are here. For me, it is my eighth trip to Sylhet. 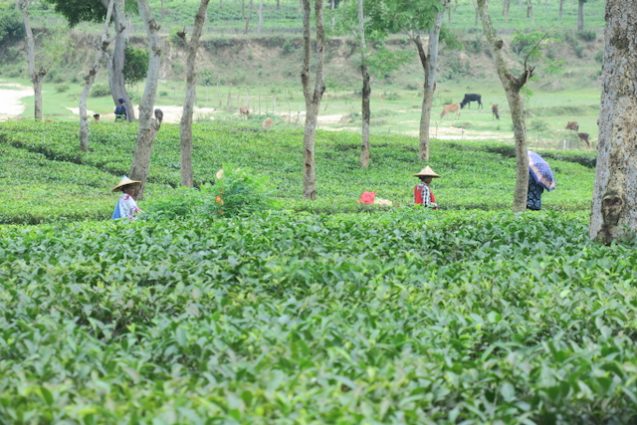 The manager of the tea garden was very welcoming and we walked around with the assistant manager in brutal heat until we found a suitable site. With acres of tea plants, it is easier to find places away from power lines. We started deploying our instruments, although we couldn’t finish until Samer’s team returned from picking up the last two sites west of the Meghna River. Because of all the broken magnetometer cables, we don’t have enough without the ones from the other sites. With needing to trench and bury all the cables, it was a tough day, although the tea garden staff did a lot of the trenching. By the time the others arrived we were exhausted and let them finish the site. 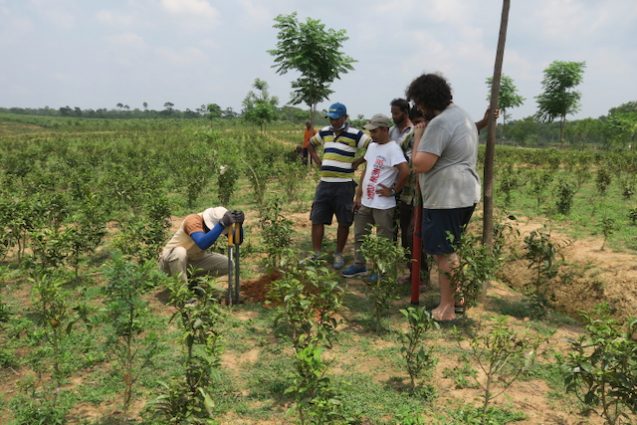 Biplab completing the digging for the vertical magnetometer while Shofique, Oliver and people from the tea garden look on.

Our new paradigm is deploying in tea gardens. We are also burying all of the lines in shallow trenches. Just enough to keep the foxes from nibbling on them. We have shortened the distance between electrodes from 100 meters to about 50 meters. Just burying ~130 m of cable is plenty of work — 230 m would be too much. Our pattern is now an L instead of an X, with two long and two short electrode cables. While longer is better for measuring the electric field, it is also more sensitive to local electrical noise. 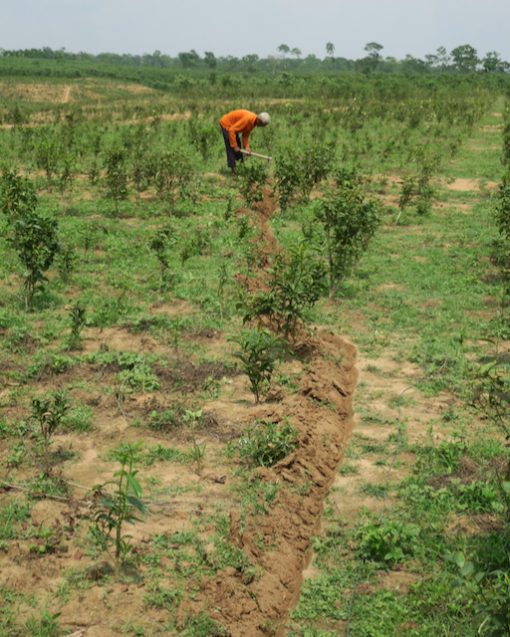 A worker was diverted from caring for the young tea plants where we deployed to digging a trench for us.

The next day, I was feeling under the weather, so stayed at the hotel while multiple sites were scouted by the two teams, including another tea garden that has had a seismic station. Permission for the tea garden came through in the afternoon, and they started deploying. When a few people returned to the hotel to get some more equipment, I joined them for the end of the deployment, although it took a little while to find them among the acres of tea plants. When leaving, we saw a fox, our nemesis, along the side of the road. 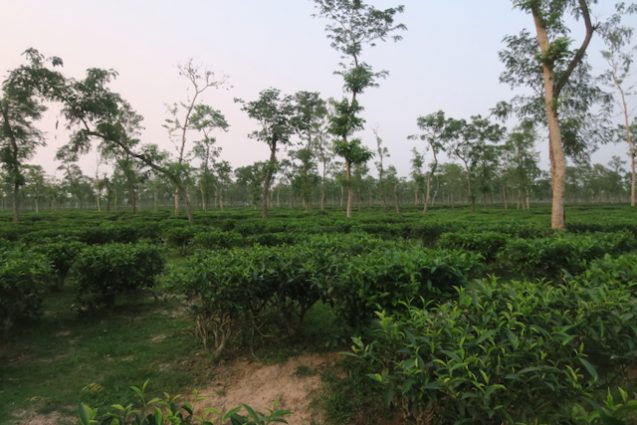 A view of our second tea garden. The trees provide shade to the tea plants. 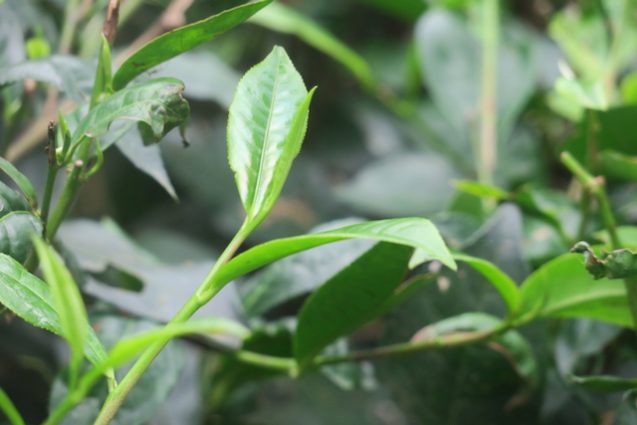 The tea pickers pinch off “two leaves and a bud” when picking.

The next morning was pouring rain, so I used the time to prepare my lectures for the next part of this trip. We have four U.S., four additional Bangladesh students, and more professors coming, and we will hold a mini-field school in conjunction with continuing the MT survey. They will get hands on (and hands dirty) experience mainly in the cooler mornings and lectures and field trips in the afternoons. In the afternoon, two teams went scouting as I continued my preparations. At dinner, we had some of the jackfruit that was bought during the scouting. The fresh jackfruit is amazing. 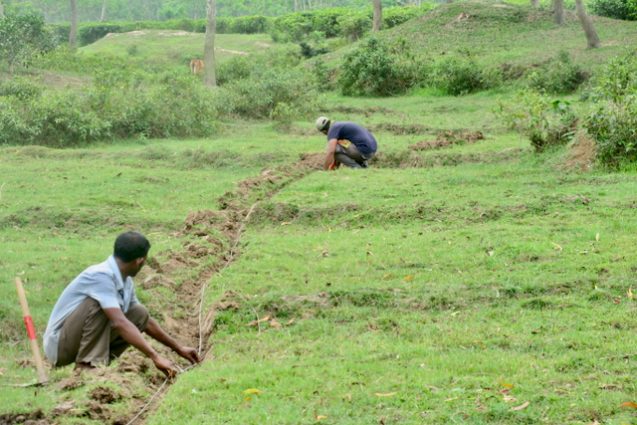 Masud and a tea garden worker lay a magnetometer cable into a trench before covering it.

It was drier the next day, so we picked up the equipment from the first tea garden and installed it at a third tea garden farther east. The trenching had worked. All of the cables were intact. I am becoming more optimistic that we will get sufficient data to make an impact. This time the deployment was in an open meadow within a tea garden, with cows grazing nearby and steeply sloping hills of tea. As before, workmen from the tea garden did most of the trenching. With the kodal, they cut into the grass and soil and overturned a segment in one or two strokes. Even the two 40- to 50-meter-long cables do not take them long. In the evening, we had fresh salad that one of the drivers made, as well as more jackfruit. 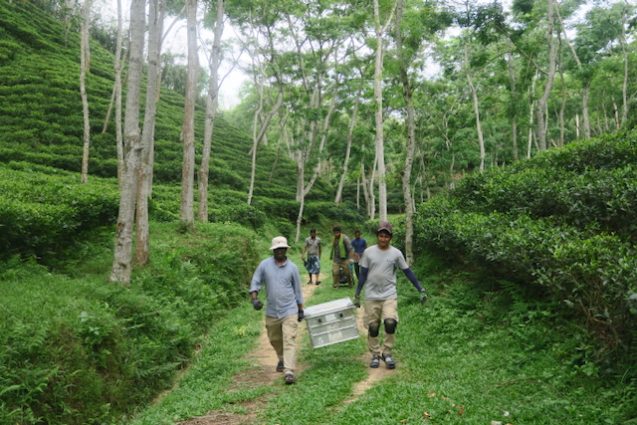 The next day was raining again, so we took the time to finally repair the broken cables that the rats and foxes had bitten. In the afternoon, Sameer and Masud went scouting. I continued to focus on my lecture preparation. That evening, it was fresh pineapple and oranges as well as a delicious juice from Bael with lemon. This is one reason to come to Bangladesh this time of year — all the tropical fruits are ripening and I hope to be sampling them most nights. 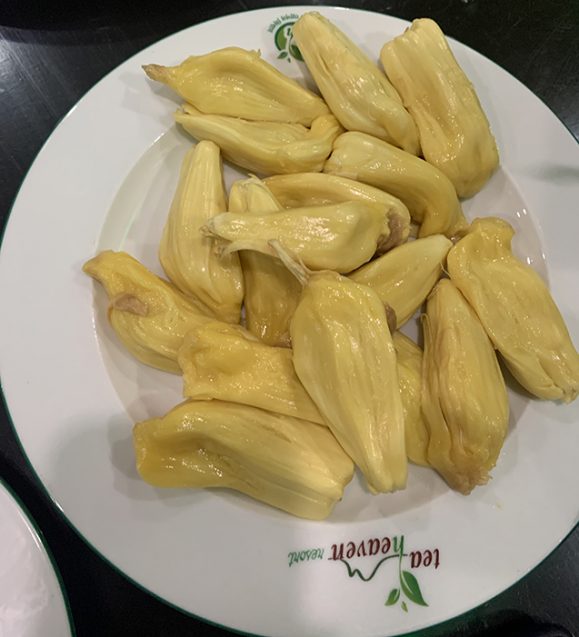 A plate of delicious jackfruit, the national fruit of Bangladesh. There can be 100-500 cements, each containing a large seed.

The following morning we all went to our fourth tea garden in the anticline just east of our hotel. This is the most beautiful one yet as we drove through valleys with steep slopes of tea all around us. We had to walk most of a kilometer from our cars to the site as the cars could get stuck if there was a sudden downpour. However, it was easy to pull the cart and appreciate the landscape at a slower pace. We took our time and the drivers greeted us with a giant bowl of fresh pineapple when we were done. 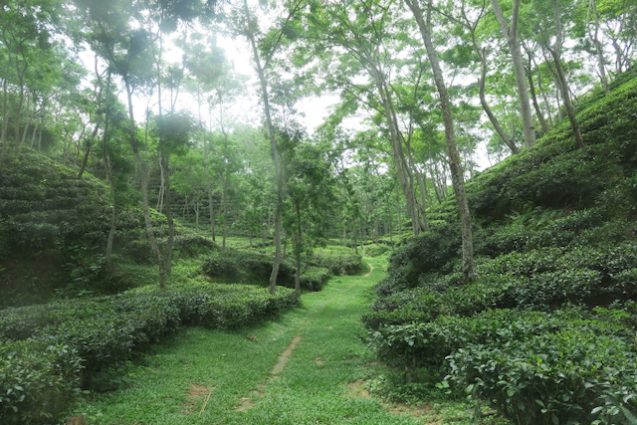 A one minute movie of walking through the tea garden (while retrieving equipment from the vans). Click to play (my apology for the dirty lens).

Now, Babu and I took off for Dhaka to pick up the students and professors for the field school tomorrow morning. Everyone else stayed behind to continue scouting, and retrieving and deploying MT. We stopped at Ujan Vati, where we had stayed not that long ago, for a quick 3:30 lunch. We got to Dhaka for the evening. In the morning we met or picked up the Bangladeshi students and professors, and got the Americans from the airport for the long drive back to Srimongal in two cars, this time stopping for lunch at the same place a little after 3. Tomorrow we switch from purely MT to a mixture of MT and field school with 11 students, five professors and five drivers. 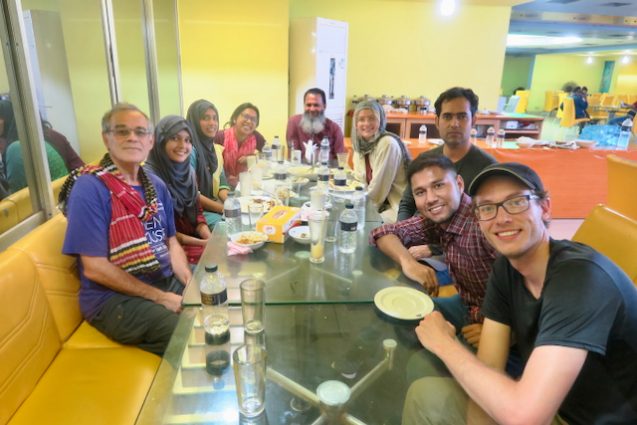 Lunch on the way back to Sylhet with out new students.