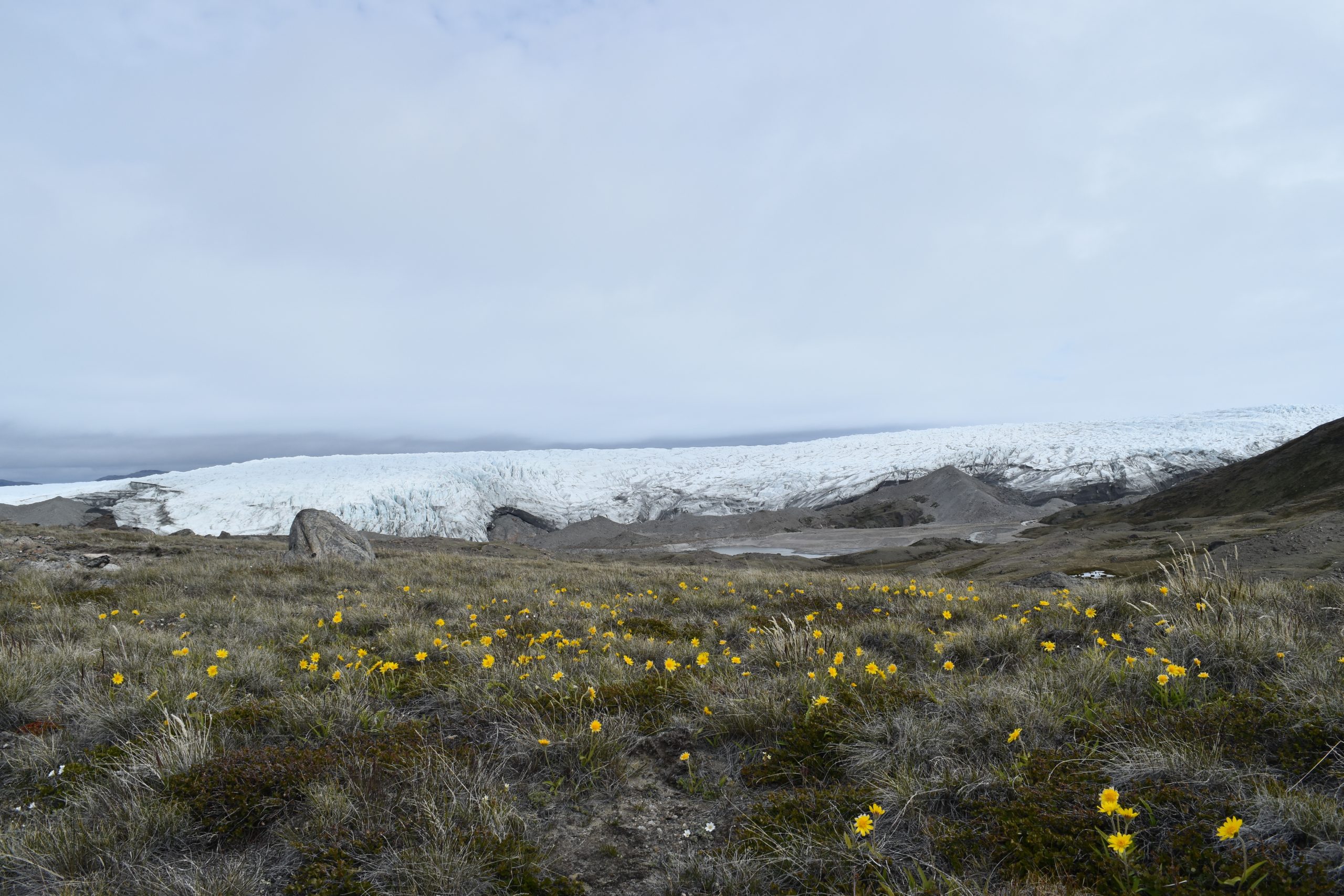 Arctic permafrost holds vast amounts of carbon that could be released as the world warms. Here, tundra near the Greenland ice sheet in summer. (Kevin Krajick/Earth Institute)

By the end of this century, permafrost in the rapidly warming Arctic will likely emit as much carbon dioxide and methane into the atmosphere as a large industrial nation, and over time potentially more than the United States has emitted since the start of the Industrial Revolution.

But that’s only one possible future for the vast stores of carbon locked in formerly perennially frozen but now-thawing ground in the Arctic. Using more than a decade of synthesis science and regional models, a new study published in Annual Review of Environment and Resources forecasts cumulative emissions from the permafrost regions through 2100 under low, medium and high warming scenarios.

“We hope that these forecasts of future Arctic carbon emissions not only update the scientific picture but act as new guide rails for policymakers who are working to stabilize the climate and avoid exceeding temperature targets,” said lead author Ted Schuur of Northern Arizona University.

The team estimates that under a low warming scenario—one that could be achieved if the global community limited warming to 2 degrees C or below by reducing fossil fuel emissions—permafrost would release 55 billion metric tons of greenhouse gases by the end of the century in the form of carbon dioxide and methane. If nothing is done to mitigate climate warming, the study estimates the Arctic could release 232 metric tons.

The team’s projections go beyond previous international forecasts by accounting for hydrological and biogeochemical dynamics, and tipping points unique to the permafrost zone.

For instance, scientists are witnessing abrupt thawing in many permafrost regions, where rapid melting of ground ice in permafrost causes the land surface to collapse. This forms lakes or causes other changes to surface hydrology. Once formerly frozen ground erodes or subsides, the carbon stored there can enter the atmosphere via microbial respiration. Such rapid nonlinear shifts quickly and permanently change permafrost’s ability to store carbon and could toggle large swaths of the Arctic from taking up carbon to giving it off. Recent estimates suggest that one-fifth of current permafrost terrain is vulnerable to abrupt thaw.

“Once permafrost carbon emissions increase in response to climate warming as some models predict, there won’t be a way for us to stop that process,” said coauthor Roísín Commane, an atmospheric scientist at the Columbia  Climate School’s Lamont-Doherty Earth Observatory, and assistant professor of Earth and Environmental Sciences. “We may need to reduce our fossil fuel emissions much sooner than currently planned by many governments to avoid triggering possible tipping points in Earth’s climate.”

The potential to cross both regional and system-wide tipping points is one reason the story of Arctic carbon and its future security remains only partially written. The new study describes nine different futures based on how climate warming progresses, and what actions global leaders take to reduce fossil fuel emissions.

“Permafrost emissions will be a large and substantial contributing factor to atmospheric greenhouse gases, no matter which of the possible scenarios becomes reality,” said Guido Grosse, of the Alfred Wegener Institute in Potsdam, Germany and coauthor of the study. “But there will be huge differences between mitigation scenarios that matter to the overall global carbon budget.”

Because the Arctic is not regulated by any one state, and its remoteness makes it hard to monitor comprehensively, the authors emphasize that international emission reduction efforts must account for the region in climate targets and actions going forward. The study also underscores the importance of monitoring the region using collaborative networks like the Permafrost Carbon Network and scientific tools like remote sensing technology.

“Remote sensing products can really help us see and track what is happening to permafrost in a physical way,” said Commane. “High-resolution sensors can see evidence of thermokarst soil collapse, how water bodies are changing, and even how wet or frozen the soils are. But satellites that tell us how much carbon from permafrost ends up in the atmosphere are limited, and there needs to be investment from space agencies in these capabilities as soon as possible.”

Schuur said his team on the ground is seeing rapid changes. This summer, at a study site in Eight Mile Lake, Alaska, they witnessed widespread permafrost thaw after a winter with record snowfall, and carbon losses four times larger than the average over the past several decades.

The study was coauthored by scientists from a dozen other institutions in the United States, Canada and Europe. Part of the work was supported by the U.S. National Science Foundation.

Adapted from a press release by Northern Arizona University.

What about ancient micro organisms that may be revived and interact with humans? Read new diseases.