What Tropical Trees Can Teach Us About the Environment 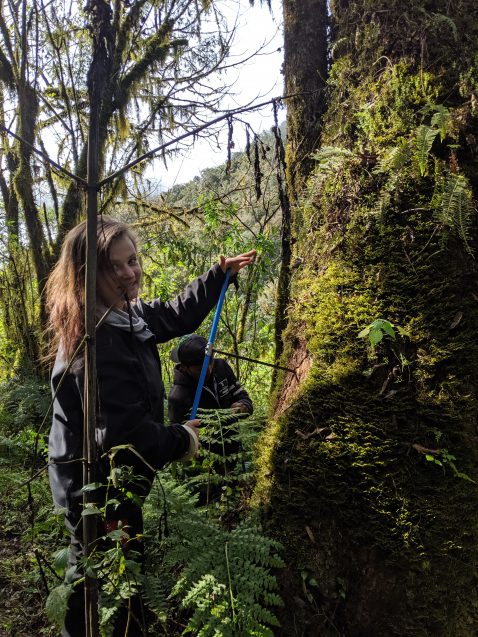 Rose Oelkers is a tree-ring scientist with a difficult task: studying trees that don’t have annual rings—or at least not very clearly defined ones.

Currently a fifth-year PhD candidate at the Columbia Climate School’s Lamont-Doherty Earth Observatory, she analyzes tropical tree species in Bolivia and Peru to characterize their growth patterns and responses to changes in the environment.

But when Oelkers was an undergraduate entering William Patterson University in New Jersey, she planned to study ecology. “I really had no idea we could study tree rings,” she said.

That all changed when she met an enthusiastic tree-ring scientist in William Paterson University’s Department of Environmental Science: Nicole Davi, who introduced her to the concept of trees as storytellers of the environment. Oelkers knew she wanted to learn more.

“I found it really neat that you could go to your local forest, look at tree rings for a particular time period, and relate it to a human memory—for example, if you were around during the drought of the 1960s in the Northeast, you could look at some of the old-growth hemlock tree samples from New York and see small rings that occurred for those years,” Oelkers said.

So when Davi announced a research opportunity that involved significant lab and fieldwork, Oelkers took it—and hasn’t looked back since. “I fell in love with the idea of being able to get your hands dirty and travel across the world to try to learn more about different environments,” she said.

Through Davi, who is also an adjunct senior research scientist at the Tree-Ring Laboratory at Lamont-Doherty Earth Observatory, Oelkers met other transformative tree-ring scientists and became the lab’s lead technician from 2015 to 2018, working on a variety of projects, including studying the density of tree rings from slow-growing white spruce in Alaska.

Today, Oelkers is working with Laia Andreu-Hayles and Roseanne D’Arrigo at Lamont-Doherty to study tropical trees from South America, which she says is vastly different from her experience with tree rings in the Northern Hemisphere. In the Q&A below, she tells us about the challenges of working with tropical species, and how she discerns their hidden stories.

Why is your current research on tree rings in tropical climates important?

If we can study tree-ring variability through time, we can understand different aspects like forest age and climate variability. There’s not a lot of tree-ring data in South America; it’s a huge gap in the network. Despite this, it’s known that some of the oldest growing trees are located in the tropical Andes of Bolivia.

Trees grow very differently in these wet and dry environments, where there isn’t a summer and winter. Prior to the 1980s, it was widely and incorrectly believed that trees in the tropics just kept growing and didn’t even form annual rings. Or if they did, they were indistinguishable or inconsistent due to a ‘lack’ of seasonal climate variability. In recent decades, there’s been a monumental effort in the tree-ring community to explore tropical forests like the Amazon and develop new tree-ring chronologies. They’ve discovered that some trees, if they exist in locations that endure dry seasons longer than two months, can actually form annual rings. And by studying different parameters of those rings, we learn that they can respond and record different changes that happen in the environment they grow in. 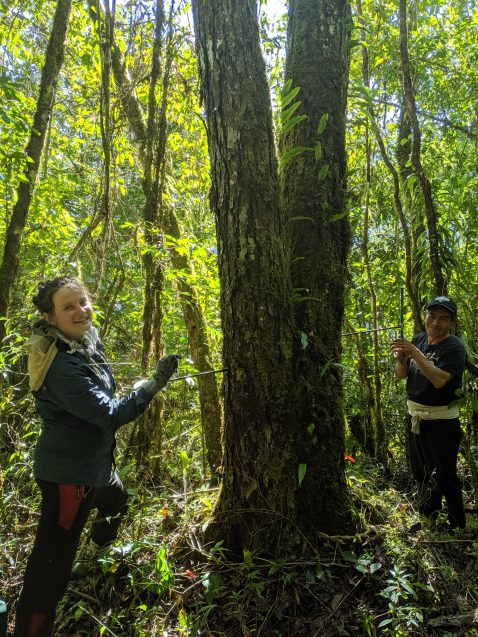 What are some of the biggest challenges and opportunities of this work?

The location that I study in Bolivia is very complex—there are high elevation Andean environments with very slow growing species, but also lower elevation, humid Amazon forests with millions of species that haven’t even been identified. In some regions, we have little information about forest history and how tree species grow.

In the Bolivian tropical Andes, we work together with botanists from the National Herbarium of Bolivia; collectively, our goal is to find and sample old trees that produce annual rings to learn more about forest age and growth cycles. It’s exciting but challenging to study new species for tree-ring research. Dendrochronology is more than just counting rings to determine the age of the tree. For example, the variation of those rings can help us understand how the tree growth has responded to climate change over time: are the trees growing faster or slower? Do they grow more during wet years? Is there evidence of fire, or change in the forest structure? Is it human-made? We’re really just getting a history of the land from the trees’ perspective.

It’s a much different process from studying trees in the Northern Hemisphere environments, which have been studied extensively due to the large variety of species that grow in close proximity to one another with clear, annual rings in the wood; it’s easier to build a well replicated, robust dataset. Tropical tree species may have more complex growth because the climate, ecosystem, and overall growing conditions are completely different.

How do you study tropical species and determine their growth when the rings may not present an annual pattern?

With non-tropical trees, the most traditional parameter of dendrochronology is measuring the width of the rings in each core or cross-section to understand each tree’s growth pattern over time. Because we know the year we extracted samples in the field, we assign preliminary dates to the rings and cross-date the ring width patterns among other nearby trees through time. If they are all growing similarly and annually, the number of rings and relative width per year will positively correlate, which tells us these trees are responding to a similar environmental variable that contributes to growth.

In tropical species, you might find different numbers of rings on one side of the tree to the other, and the cross-dating process becomes difficult.

To confirm if the rings are produced annually, it’s common to use independent methods of dating such as radiocarbon analyses, which is what we’re doing for the Bolivian tree samples. If the dates we assigned through dendrochronology precisely match the radiocarbon curve from the atmospheric data, then that verifies that you have annual growth.

Sometimes rings are impossible to identify, even underneath the microscope. We look at very high resolution images of the tree samples to try to identify if we have a ring that has both the earlywood—which is the wide, porous part of the ring that develops during the wet season—and the latewood: the thin, dense, band of cells that forms during drier conditions. Magnifying these anatomical cuts can help us identify the growth layers. If we don’t have that thin band of cells where the cell walls grow closer together, signifying growth cessation, it may mean tree growth doesn’t officially shut off, and perhaps these trees grow differently and not annually. So tree-ring width, wood anatomy, and radiocarbon analyses are key tools we use when studying trees from complex growing environments like the tropics. 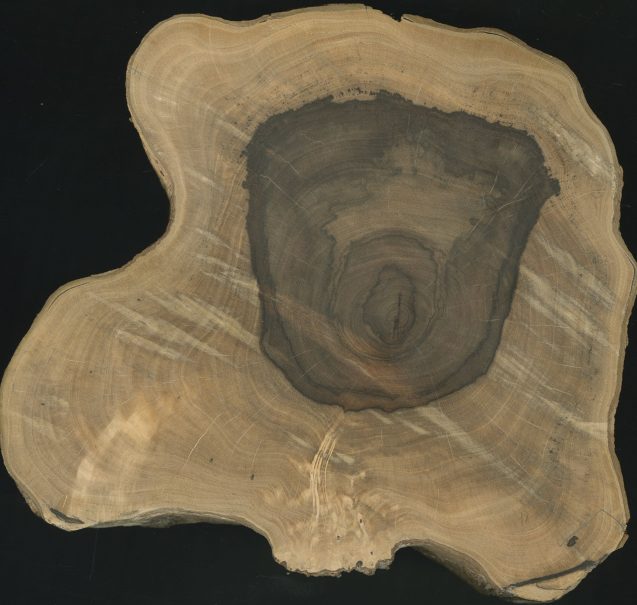 A sample from the tropical tree species Machaerium nyctitans, also known as canela do brejo or espuela de gallo, from a wet forest in north Bolivia. The ring-width patterns vary across the tree sample, which highlights the need to measure multiple sections of tropical wood to get an accurate representation of growth. Photo: Rose Oelkers

What stories do these trees have to tell us about their climate? What can they teach the local community?

In general, we can try to understand past major climate events or trends. So if there were a cyclical pattern, say, every 50 years these trees grew very low and that time period happens to coincide with known climatic events, whether it be drought or something else, we can help predict if the frequency of those droughts might be increasing or try to communicate that maybe it’s smart to manage water resources if a 50-year drought might be approaching.

In one of the species I study in the high elevation site, we are observing a decline in tree growth since the 1980s. They’re dying for some reason, and it could be drought related or, perhaps, related to the extension of the growing season and limited resource availability. We’ve been trying to talk to the local people to understand, how has the growing season changed? Have their crops been growing later during the year? I think it’s important to have this relationship of what is known and valued from the community in conjunction with what the trees have recorded in their communities to try to enhance the understanding of how the environment is changing.

What has surprised you most while studying trees in these tropical environments?

It’s been really interesting finding how old some of these trees growing in humid environments are. In the high elevation sites, it’s typical for the highest growing trees in the world to grow up to 700 years old, but that’s because they’re in very harsh environments and their type of species are resilient to these conditions. But down in lower latitudes, like some of the more moist environments, these trees are also way older than I expected. Two-hundred years old doesn’t seem like that much in comparison, but in really wet environments it’s likely that large trees are fast-growing and young, which I’ve learned is not always the case.

There is so much human history and value of these trees to the local communities that has yet to be understood. As we study new tree species, we also learn about how they are used (medicine, timber), and the stories they record. For example, you can see evidence of human settlement within the growth rates of the tree rings. If there is clear-cutting in the forest, the living trees I sample will show this huge release of really fast growth, or big rings going through time. And talking with the people and hearing them say, “Yes, we actually settled in this community 20 years ago,” which happens to coincide with that big growth release, is pretty incredible. It’s amazing to see this connection between the people and the trees.