In a northern region of Pakistan, a landscape marked by snow-capped mountains and glaciers, Indigenous customs used to access meltwater have long enabled subsistence. The people of the Hunza Valley (the Hunzakutz) once solely depended on the land and its natural resources, with glacial meltwater forming a principal connection between communities and the environment. These traditional lifeways are currently threatened by climate change and globalization, while rapidly changing gender roles are also transforming the livelihoods of those living in Hunza and other upper Indus River valleys. There are, however, indications that the Indigenous traditions of the Hunzakutz population will prevail despite the external forces of change.

A heartfelt chapter named Rajaki by Zainab Khalid, published in the volume Environmental Humanities in the New Himalayas, explores a community-based approach to the Hunzakutz water resource management. Khalid, an environmental scientist at Lanzhou University in China, and a researcher in the Department of Development Studies at COMSATS University Islamabad, Pakistan, has a personal connection to these glaciated valleys—her maternal forefathers are from the Himalayan foothills of Badakhshan, Afghanistan, which borders the Hunza Valley.

Talking with GlacierHub about her fieldwork, Khalid said, “I’ve been working in the region since 2016 and I’ve had a very good experience. People are extremely kind and welcoming, they are not estranged to foreign researchers and are open to sharing their lives and experiences.”

The valley was first populated by Hunza people, who settled there and became a distinct community through interactions with the Indigenous Himalayan peoples. Native knowledge concerning the land and local resources was central to the establishment of their community and remains deeply rooted in their culture. However, although the Hunzakutz were once solely self-sustained, they now depend heavily on goods from other regions of Pakistan and imports from China, which has consequently brought challenges from urbanization and globalization. 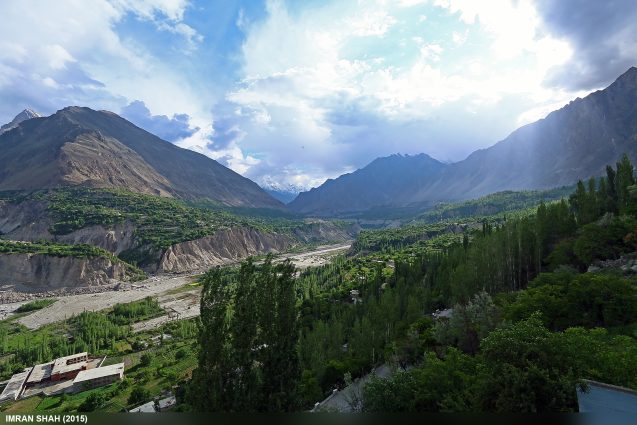 Landscape of the Hunza Valley, in the Gilgit-Baltistan province, Pakistan. Credit: Imran Shah/Flickr

Water in the valley is provided by glacial sources in the high mountains which feed streams and rivers throughout the region. Meltwater is used to irrigate fields to grow wheat, millet and vegetables, especially potatoes, and orchards of walnuts, almonds and apricots. The goats and yaks that the people raise in the mountains also require water. The rugged topography of the region means water is often difficult to access, making its management of central importance for the Hunzakutz’s livelihoods. 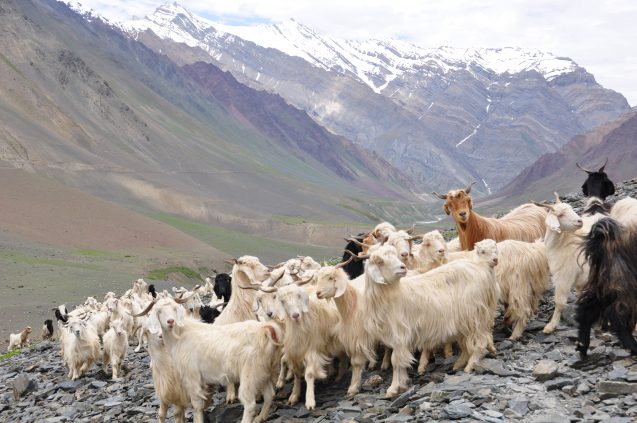 Cashmere goats in Himachal Pradesh, India. Goat farming is one of the main types of livestock farming in the Himalayas. Credit: Jelle Visser/Flickr

The practice through which communities construct pipes to channel water from the glaciers to their villages is known as rajaki. The villagers encourage one another to participate in rajaki because they believe that it teaches people to form a relationship with their environment and to view resources, such as the glaciers, in a manner of ‘commons.’ This belief that working cooperatively and sharing common resources to increase the productivity of the land is central to the success of rajaki. 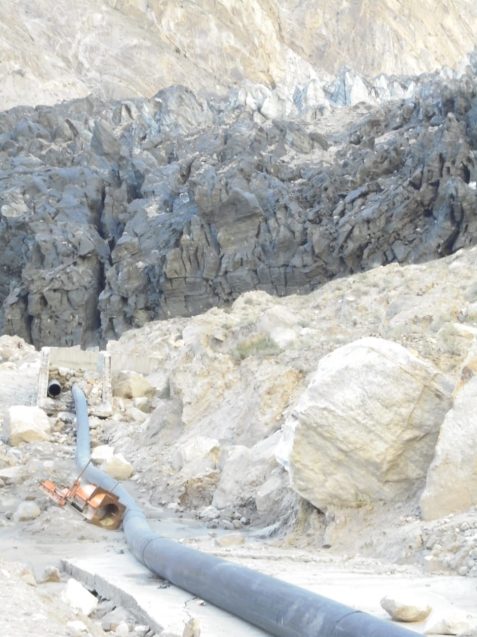 A pipe built to transport water from high altitude glaciers to villages in the Hunza Valley. Credit: Zainab Khalid

One of the most striking transitions underway in the Hunza valley is in the gendering of practices and norms. Traditionally, rajaki mostly involved men because they were deemed more suited to the hard labor involved, but many young males are migrating to larger cities in search of paid jobs, leaving behind a diminished population in the valley. The growing pressure to maintain rajaki in the absence of these key players has meant the participation of women has grown significantly. They are beginning to lead in rajaki construction and maintenance, and play an increasingly significant role in defending the longevity of such centuries-old practices.

Khalid has shown that the position of women not just in rajaki but in multiple aspects of the Hunzakutz society is changing. Women are increasingly becoming financial contributors outside of the domestic workspace. This participation in the economic sphere is “one of the strongest evidences of the beginning of a societal transformation [in the Hunza valley],” Khalid wrote in one of her papers.

In addition, women in the region have long been subject to greater vulnerability in the face of natural disasters, such as glacial lake outburst floods, because they are often less educated and face barriers in accessing financial resources during times of crisis. Khalid’s interviews revealed that women are proactively willing to participate in disaster mitigation and management decisions, and that they must be involved in order to reduce gender inequalities. When interviewing Hunzakutz men, Khalid sensed that perceptions of women’s rights and responsibilities in society are shifting, although this remains at the community level and has not yet been recognized within formal or governmental organizations. 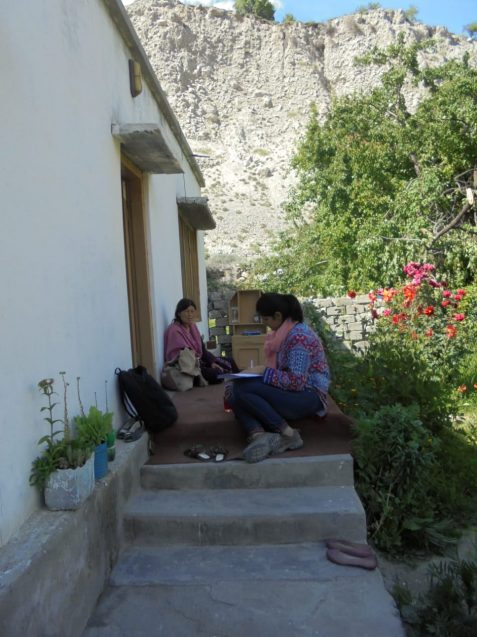 Although the valley is geographically secluded, China’s construction of the New Silk Road (also known as the Karakoram Highway), an enormous development project, will connect the region with Europe and East Asia. This project forms part of China’s efforts at expanding its global reach through its Belt and Road Initiative. The isolation of the Hunzakutz villages could be seen to protect its Indigenous practices, but increasing connections to the outside world are eroding traditional cultures, including that of rajaki. “The China-Pakistan corridor is bringing a lot of access, [whereas] before very few people could reach the area, and with that people have transformed their livelihoods,” explained Khalid. Some people have built guest houses or hotels on their land to facilitate new visitors, and these people are less interested in participating in rajaki because they are abandoning agriculture for infrastructure development. Khalid adds that “[construction] is not safe because there are no building codes and there are all kinds of geohazards, unstable slopes, active erosion, seismic activity.” Nonetheless, the forces of globalization have greatly reduced poverty in the region, which consequently is another likely reason why participation in rajaki has declined in recent years, because people are no longer as reliant on the land for their sustenance.

From her time spent researching the Hunzakutz, Khalid thinks that although rajaki is now more of a choice than a necessity, “there was ownership that it [rajaki] is their culture and this is what makes them [the Hunzakutz] unique. There is no other way for people to have water apart from the glaciers so they have to rely on them.”

The importance of glacial meltwater in this region of the world means its governance is intensely researched and the subject of numerous international organizations. Aditi Mukherji, a researcher at the International Water Management Institute New Delhi, explained to GlacierHub that “in the case of the Indus, glacial melt accounts for a large share of the river flow because it does not receive as much monsoon rains [as basins further east, such as the Ganges. Therefore] glacial melt is crucial to Pakistan.” 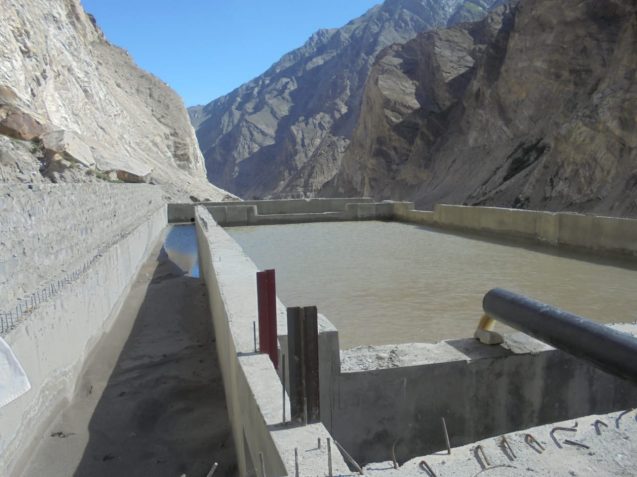 A large storage tank of water that is connected by pipes to villages. Credit: Zainab Khalid

Moreover, climatic changes are altering the physical environment in the valley. Landslides caused by excessive rainfall are becoming more common. During Khalid’s visit in the summer of 2019, a landslide broke some water pipes and the community had to resort to using water from large tanks stored outside that are usually used for dishwashing and laundry. Flooding often disconnects the water channels so they need to be monitored more frequently, a worrying concern when fewer people are interested in maintaining the practice, coupled with a predicted increase in severe flood events, including those from glacial lake outbursts.

“All of the challenges are overlapping,” said Khalid when asked what she feels is the greatest threat to the Hunzakutz. “The government agency is quite inadequate at the moment,” she added, and therefore addressing these challenges is difficult and progress is slow. “When you go into the field you find so many women that are participating in community activities that are making a difference and who take pride in their achievements, you feel positive that changes are happening right now. But if you look from the government point of view, there is a long way to go. One can only hope that the government will follow suit and realize that it is a necessity to have female representation,” Khalid told GlacierHub.

Hamna Tariq, a Pakistani national and a graduate student at the School of International and Public Affairs, Columbia University, shared her perceptions of the government with GlacierHub. Tariq felt as though a “government mismanagement of water resources” has exacerbated issues surrounding unfair distribution of resources between provinces.

The life of the Hunzakutz could be rendered unsustainable if the practice of rajaki is abandoned. Yet in spite of undergoing tremendous cultural transformations because of changing gender roles, globalization and climate change, some Hunzakutz people are taking ownership of their traditions and adapting their lives in a way that preserves their heritage. The narrative of the Anthropocene threatening Indigenous communities appears all too common across the world. But a greater recognition that native knowledge and customs are essential for adapting to changes may be the savior for these peoples.