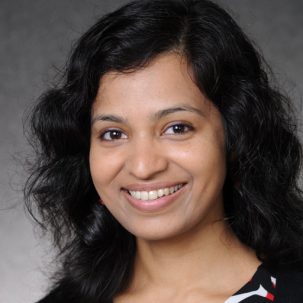 When Professor Indrani Pal is not teaching sustainability management students about water resources and climate, she’s designing solutions for real-world problems. Most recently, she received the Moonshot Award for her project, “Where’s My Water?: Predicting Renewable Freshwater Resource & Filling in Crucial Data Gaps.” The award—administered by California’s State Water Resources Control Board and the West Big Data Innovation Hub—celebrates the most ambitious projects with the highest potential for impact.

Pal never knew she’d become a water scientist―water came to her, she says. In high school, a teacher encouraged her to pursue engineering given her aptitude in math. With her undergraduate degree in civil engineering, Pal competed in a national entrance exam and she was offered a spot in the water resources master’s program―much to her own dismay. With time, however, Pal gradually developed a passion for the water discipline. She excelled in coursework and went on to develop a global perspective on water science, studying at the University of Stuttgart in Germany, the University of Cambridge, and now Columbia University.

Even though Pal has delivered numerous peer-reviewed publications, she realized she was merely “hypothesizing” solutions in her papers, without knowing how they could be implemented to solve real world problems. On her journey to rediscover her capability beyond publications, Pal began attending conferences focused on solutions. While attending Bloomberg’s Data for Good conference in 2019, Pal was introduced to the West Big Data Innovation Hub and the California Water Data Challenge. Even with the deadline days away, Pal eagerly applied to the challenge. Following the review of applications, Pal received news that she was invited to Berkeley to present on her proposed idea, which would later earn her the Moonshot Award.

Pal leveraged her own network to assemble an interdisciplinary team with five other experts in their respective fields of social science, artificial intelligence, product development, data science and visualization. Together, Pal and her team would brainstorm issues facing California’s water supply and discuss potential solutions the team could develop. However, it wasn’t until a data dive on the California State Water Project’s (SWP) water supply system that the team discovered their issue. Pal and her team identified how a data-driven approach would enhance the state’s ability to predict water supplies.

“If we could predict supply of water better for the rivers providing water to the state water board, it would help them make better decisions of water delivery to the rights holders and also down to the south which receives 100% of their drinking water from SWP,” said Pal.

Pal and her team also discovered that over 90% of the state’s water sensors were placed in rivers that were not naturally flowing, which created gaps in the data. Having a complete data set was necessary to develop data-based models. So, Pal and her team focused on these hydrology issues first, using AI to make up for gaps in the water data. When completed, the team’s products improved river flow data as well as predicted water supply data. 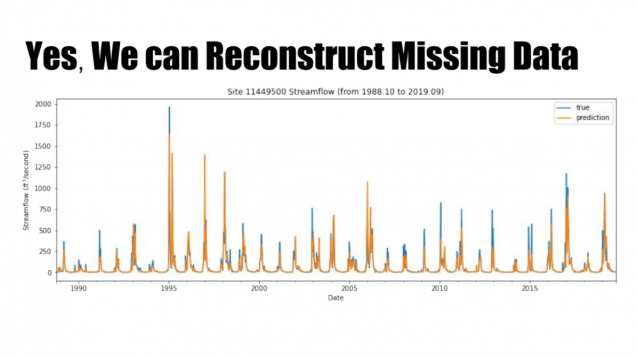 Comparison between the observed (“true,” in blue) and reconstructed (“prediction,” in orange) streamflow volumes in a Californian river.

Despite her team’s success, leading this collaborative effort proved to be a challenge for Pal. For nearly two years, she worked with individuals across five different states and three different countries, including 20 students from multiple academic institutions. Having received no funding at all, Pal had to work incredibly hard to ensure her team stayed motivated. Sustaining this effort for a prolonged time taught Pal the value of patience and perseverance. At the same time, Pal also had to deliver quickly or she risked losing the trust of others. Hence, learning how to balance these conflicting demands was no easy task for Pal.

Despite these challenges, Pal accomplished her goal of creating real-world solutions to the hydrological issues she had studied for years. Columbia’s M.S. in Sustainability Management Program would like to recognize Professor Pal’s recent successes and look forward in anticipation to her continued contribution to solving these complex problems.

Super – speaks to her dedication