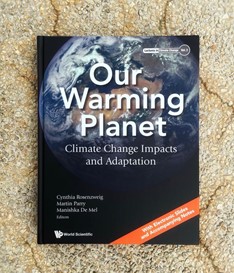 A new multimedia package of 25 lectures from climate scientists around the world is aimed at students, researchers and the general public. Our Warming Planet: Climate Change Impacts and Adaptation consists of a printed book supported by electronic slides and a webinar series in which each author presents their lecture. The cast is authoritative: three quarters of the scientists have contributed to reports from the Intergovernmental Panel on Climate Change, and all are recognized experts in their fields.

Separate chapters cover coastal flooding, water resources, agriculture and more, as well as specific regions from the Caribbean to Japan and Africa, and biodiversity hot spots in widespread regions.

There will be a book launch on Wednesday, Feb. 16, with hosts including co-editors Cynthia Rosenzweig of the Goddard Institute for Space Studies and Manishka De Mel of Columbia University’s Center for Climate Systems Research, and Goddard scientist emeritus David Rind. Free biweekly webinars by the chapter authors will begin March 2; they will be recorded for later viewing.

The book is the second in a series of volumes from World Scientific Publishing.

Book web page (Use discount code WSWARMING30 to get 30% off)

Register for the book launch, Wednesday Feb. 16, 10am US Eastern