Deploying in the Mangrove Forest

The first two days went very smoothly so that we were ahead of schedule. On the third day we started by going up a small river between the Sundarbans Mangrove Forest and settled land, watching monkeys playing on the shore of the forest side.  On the settled side, we found our open field. At this site and the last few before this, some of the rice fields have recently been planted with watermelon. This area grows the best watermelon in Bangladesh and it is their most valuable crop. Still, there were enough fields that were not yet planted for us to succeed. 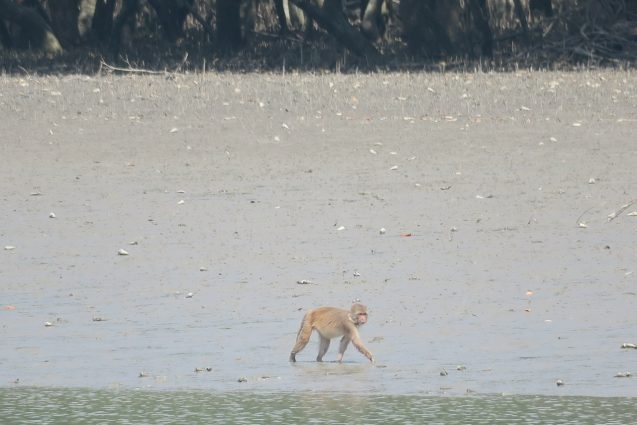 We spotted our first monkey along the shore of the forest.

The second site of the day was more problematic. We could not enter the Sundarbans until the next day, so we have to work on the land on the left bank. When we went to what we thought was a fallow field, it turned out to be a large construction site with backhoes moving around imported sand. After what seemed like forever in the hot sun, we finally found a site in two dry rice ponds that was far enough away from the heavy machinery for good measurements. By the time we finished, it was too late for a third site. Still, I have walked almost 7 miles for the two sites. 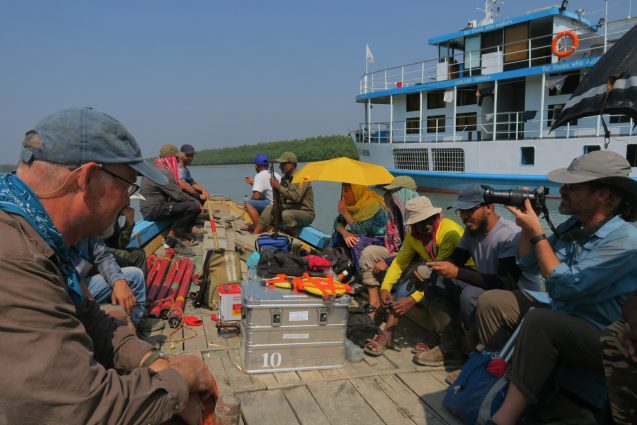 Our group on the country boat with the equipment and guards heading to a site.

In the evening, the speedboat went to Mongla to drop off Anwar and a journalist traveling with us and pick up Céline Grall and Sanju Singha. Céline is my former postdoc and is bringing equipment for additional scientific measurements. Sanju has been working extensively with me on my GNSS (GPS) work. We will visit two sites later during this trip. 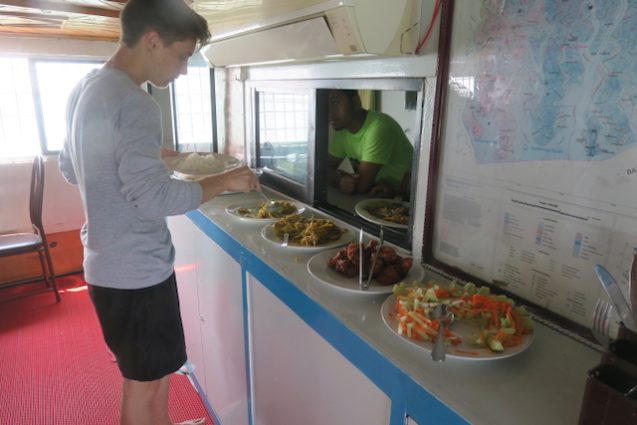 We have settled into a routine of breakfast at 6, pickup and deploy, lunch at 12:30-1, deploy more and dinner at 7:30. Food is a buffet as the lunch seen here.

To save time, we split up in the morning for the site retrieval. I went back to the first site with the speedboat, while the country boat took people to the second site. On the way back we picked up our two forest guards and the permission to work in the Sundarbans Mangrove Forest. With only two sites to pick up, we were ready to start deploying early and succeeded in installing four sites. 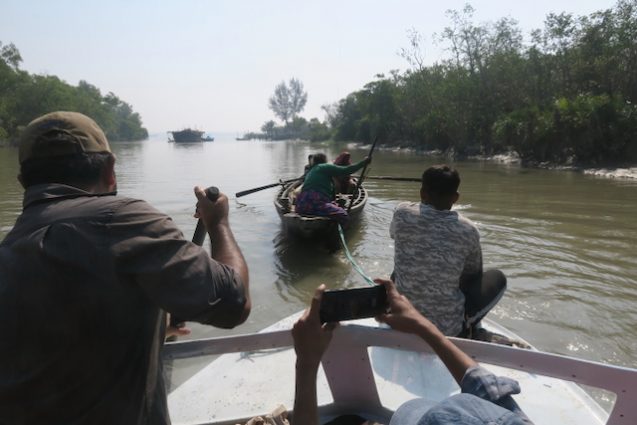 Our speedboat had engine troubles and had to be towed by a country boat to a forest ranger stations where our crew managed to fix it.

Deploying in the Sundarbans, the world’s largest mangrove forest, is different from working in populated areas. We simply pick locations at the correct distance downstream and enter the forest. We hike through the bush using deer trails when possible and try to find enough of a clearing to set up the central receiver location. For the magnetometers, the challenge is finding a spot of the correct orientation that is free of tree roots, especially the aerial roots that allow mangroves to live in salt water. 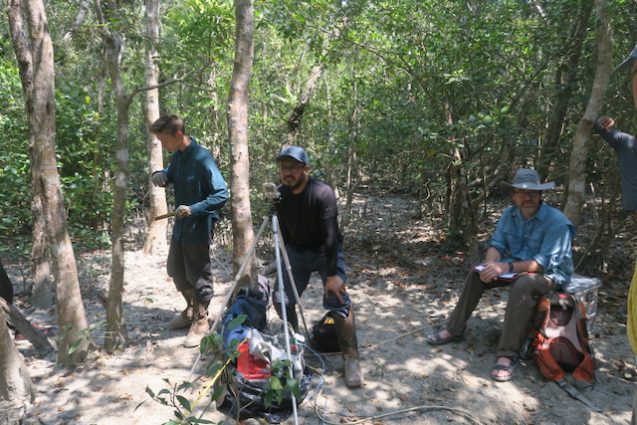 Nafis using a compass to direct the people deploying the electrode, while he can still see them.

The electrodes now became the slowest part of the deployments. Having to go directly N, S, E or W, we could not follow trails, but had to go straight through the trees and brush. We also cannot see 50 m through the forest and had to find more creative ways to position the electrodes, such as having intermediate people with compasses. For distance we need to use a tape measure as the laser rangefinder will not work. We also needed one of the armed guards to go with the group to the electrodes because of the risk of tigers. On our last site of the first day we came across pugmarks — tiger tracks — probably from that morning. We saw pugmarks, some old, at about a quarter of our sites. 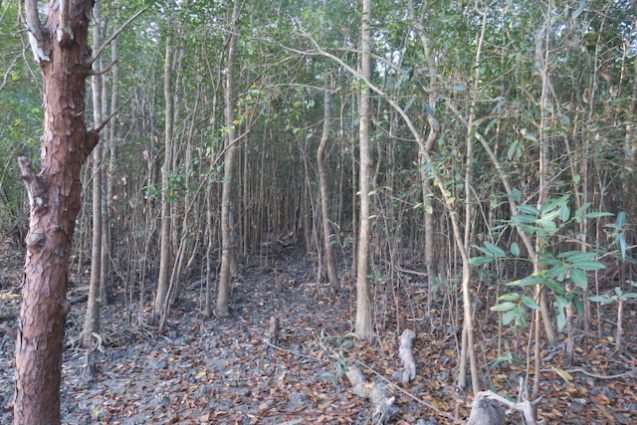 Some of the dense forest we have go through to get to our sites. And the low Goran forest is even worse.

Despite this, we manage to install four stations in the Sundarbans the first day. Only having to pick up two sites from the previous day gave us more time for installing new stations. The next day was the reverse. We had to pick up four stations. We were able to split into two groups by picking up two extra forest guards, but they had to return to their station after the pickup. The afternoon went very slowly because the Goran species of mangroves at that site formed a very dense forest. We had to hack our way through with a hatchet. 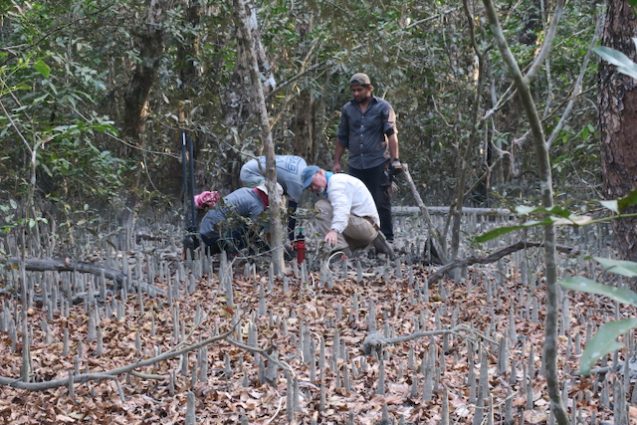 Installing a vertical magnetometer among the spiky aerial mangrove roots.

Since tigers like this type of forest, we had to be extra cautious. Our crew makes lots of loud noises to help keep the tigers away. Since there are plenty of deer here, the tigers in this part of the Sundarbans are not very aggressive and the noise is sufficient to keep them away. At least, we hope so. Almost all tiger attacks are farther west than where we are working. Still, we have established a clear safety protocol.  Everyone stays in groups of at least four people with an armed guard. We make sure we have everything we need as one person cannot go back alone to get something that was forgotten. We continuously make lots of noise. 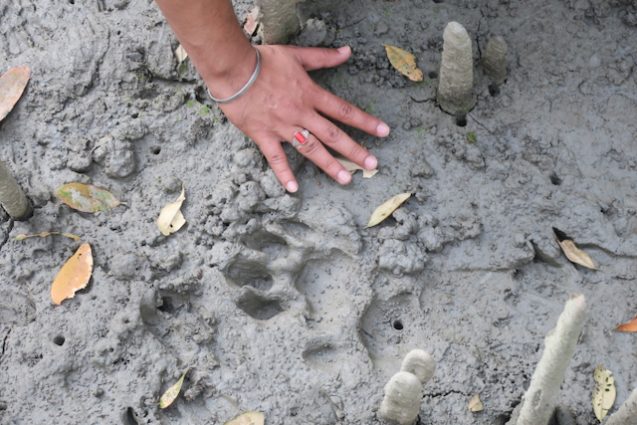 Sanju’s hand next to one of the tiger pugmarks that we found.

Once a day, we are also deploying a gravimeter that Céline brought along with one of my precision GPS. While the accuracy of the GPS with all the trees will be low compared to my geodetic work, it will be precise enough for the gravity measurements. Generally, Sanju and I set up the GPS, while Céline does the gravimeter, all with an armed guard watching over us. 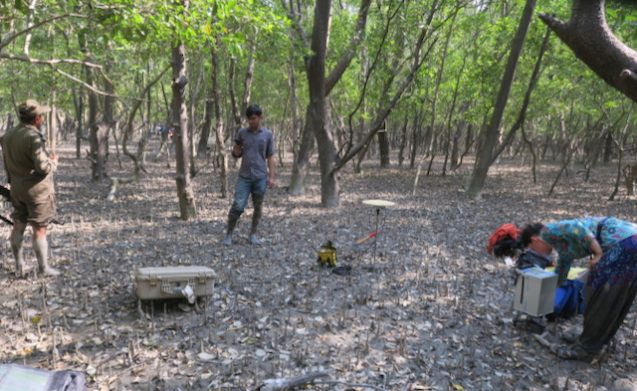 Céline makes a gravity measurement next to our makeshift GPS antenna mount and instrument box while a guard watches over us.

We had hoped to have four guards instead of the two with us. However, we have been able to get a third (and once a fourth) guard most days. As always in Bangladesh, we adjust our schedule based on the difficulty of the sites and number of guards we have. Some days we are able to split up for the much faster retrieval of the instruments. One group takes the speed boat to the farther sites, while the country boat and Kokilmoni cover the other sites. 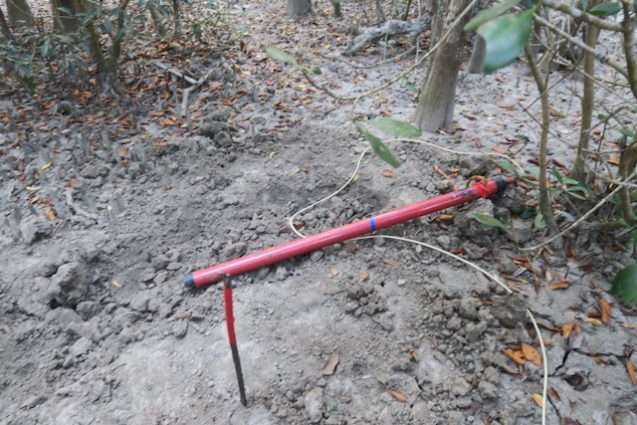 One morning we found that one of our magnetometers had been dug up by a wild boar. Luckily we recorded enough data before it happened.

In the evenings, after fieldwork and showers we watch for wildlife in the forest until it becomes too dark. We have seen deer, a crocodile, a wild boar, egrets, a stork and monkeys — but no tiger. For two nights we got to stay in one of my favorite sites in the Sundarbans, near the place called Kokilmoni that our boat is named after. The smaller channel gives us a beautiful view of both banks. 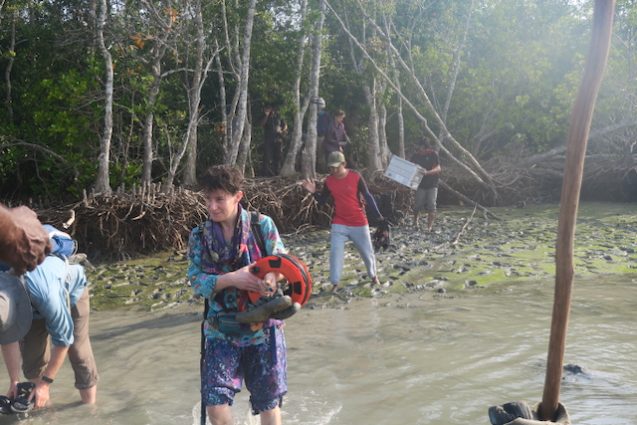 Our group emerging from the forest after a successful instrument recovery. 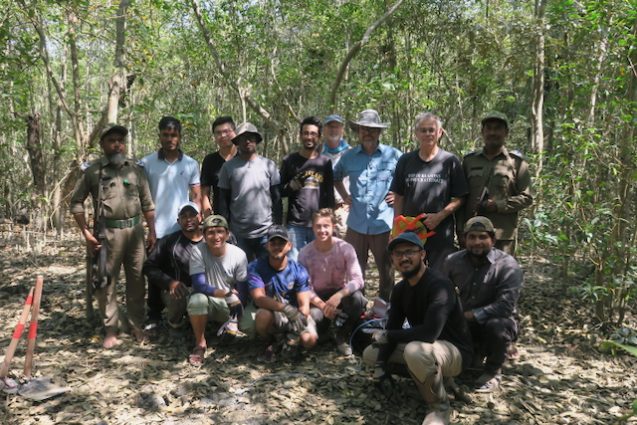 We posed for a group photo at one of the Sundarbans sites.

I am learning to tell the different mangrove species apart as well. We try to avoid the dense Goran forests, preferring the more open Gewa or Sundari forest. Our maps do not differentiate the forest type, so we sometimes cruise along the coast looking for the more open forest. On one site we unsuccessfully took the country boat up a tidal creek to find more open forest. On our last site in the Sundarbans nearly to the Bay of Bengal, we deployed on a slight sandy rise of the tidal flats. It should not be flooded until the spring tide in a few days, but we placed the recorder and batter in plastic bags on top of the metal box just in case. 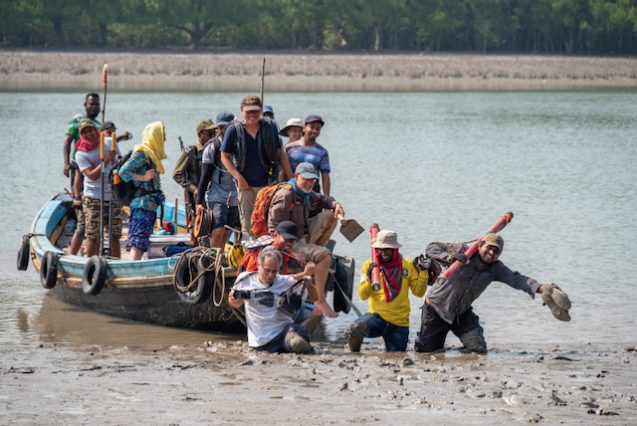 Arriving at low tide, we struggled to wade through thigh-deep mud to get to the forest at this site. 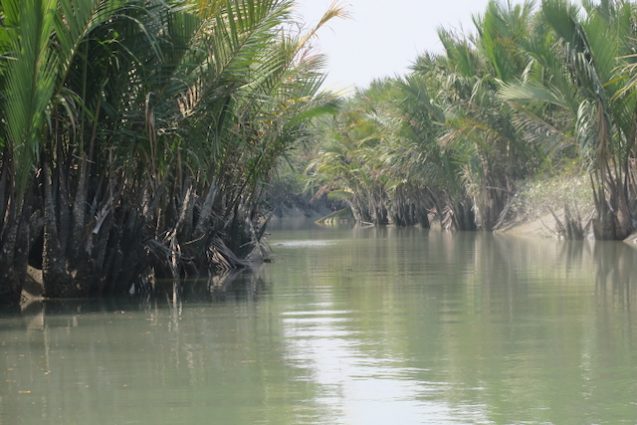 The tidal creek lined with Golpata Palm trees that we sailed up unsuccessfully looking for more open forest.

On our final morning in the Sundarbans, we were delayed by dense fog. We had to wait for the fog to burn off before we could pick up the last three sets of equipment. The speedboat crew that went to the last site found the slight rise with the recorder and magnetometers stayed dry, although some of the electrodes were underwater, which is fine. In the end, we completed 12 MT stations during four days on the Sundarbans. We then sailed through the Sundarbans toward Barisal, finally enjoying most of a day off during the transit. 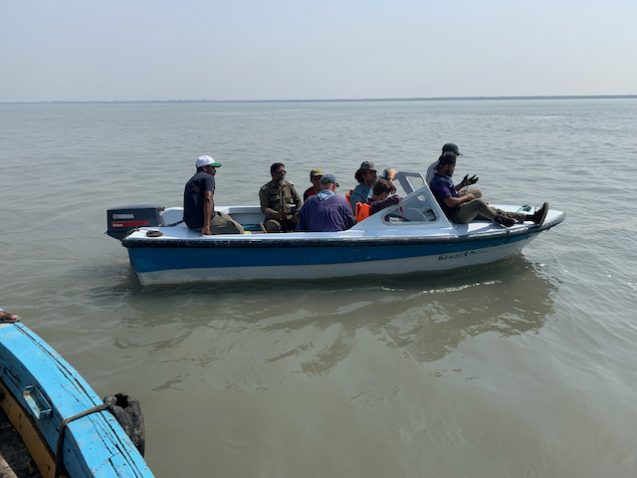 A group heads off in the speedboat to pick up the equipment from our last Sundarbans site. 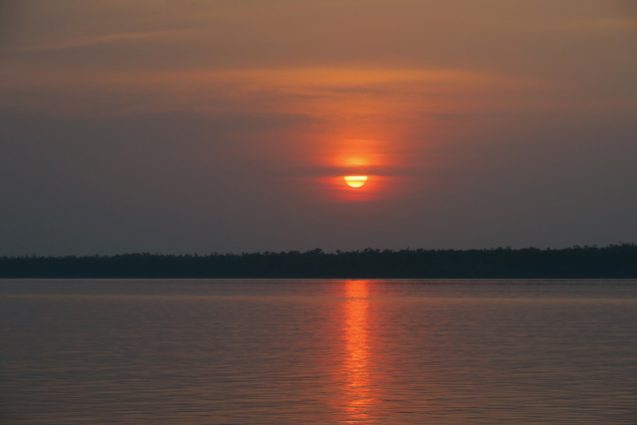 Sunset over the Sundarbans Mangrove Forest.