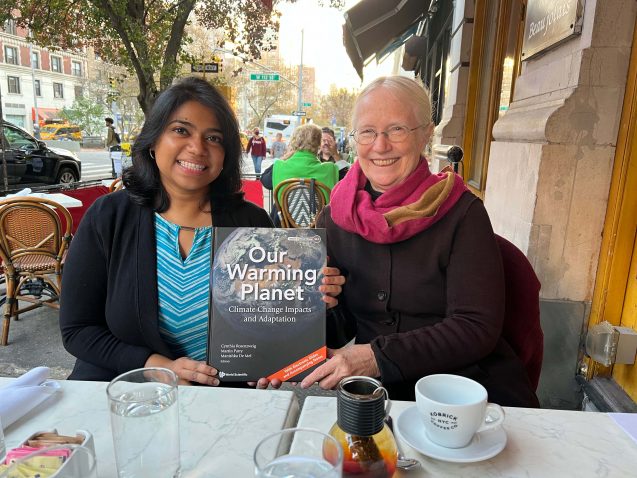 Growing up in Sri Lanka, Manishka De Mel  — a senior staff associate at Columbia Climate School’s Center for Climate Systems Research — felt bothered by a range of environmental issues around her, such as pollution from vehicle emissions, waste management problems, and deforestation. After high school, she felt motivated to study environmental sciences.

At the time, Sri Lanka did not have any undergraduate programs in that field. So she moved to the UK to study environmental management at Imperial College London. Shortly after graduating in 2004, she pursued a master’s program in biodiversity conservation at the University of Oxford. Equipped with the knowledge required to find solutions for environmental issues in developing countries, she moved back to Sri Lanka in 2006 to work at two organizations focusing on air pollution, deforestation, environmental justice and climate change.

While working on the ground with her team members and witnessing how Sri Lanka was trying to build coastal resilience in the aftermath of the devastating Indian Ocean tsunami of 2004, De Mel realized that climate change, too, would have a devastating impact on the island’s coastal areas.

“Back in the early 2000s, climate change was not a hot topic. During my undergraduate and master’s degree programs, we only had a few lectures on climate. It was not even a module or class,” she said. “I wanted to learn more about climate science, and that is how I decided to join the Climate and Society MA program at Columbia.”

After graduating, De Mel landed a job at the Center for Climate Systems Research (CCSR) in late 2013. She now leads a portfolio of conservation and development projects that stretch from the Caribbean coast to the snowy Himalayas.

At CCSR, De Mel gathers information to assess how climate change will impact ecosystems and communities in Asia and Latin America. That information then enables governments and other stakeholders to build resilience against climate variability and extreme weather events.

In a 2021 study published in the journal Weather, Climate and Society, De Mel and colleagues found that stakeholders associated with conservation projects in tropical and subtropical countries do not have access to suitable climate risk information. The local stakeholders also had little or no resources for integrating such information into decision-making processes. These barriers make it difficult for vulnerable communities to plan ahead for and adapt to climate change.

“We have been working towards providing our expertise on rising temperatures, extreme heat, rainfall patterns, sea-level rise, and ocean heat to local decision-makers. Then, we guide them on how this information can be used effectively to reduce local climate risks in the future,” said De Mel. 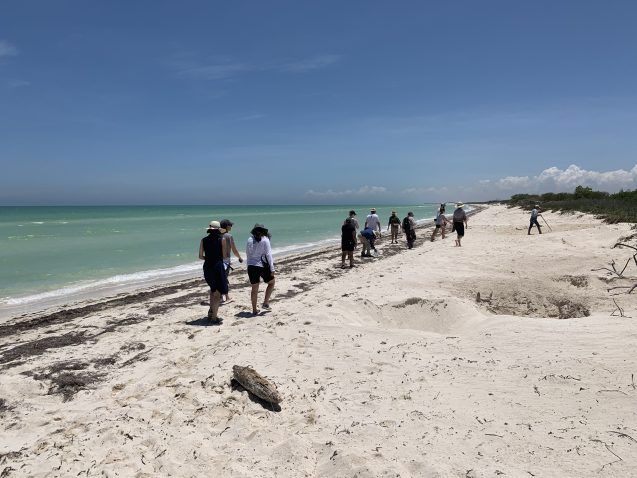 The research team walks along the shore in Mexico. Photo: WWF

One such project where De Mel and her colleagues helped integrate climate risk information into planning was in the Mesoamerican reef region in the Caribbean Sea. It is the second-longest barrier reef system on earth. With more than 60 types of coral and over 500 fish species, the entire region is a marine biodiversity and tourism hotspot. The coral reef stretches across more than 600 miles, bordering four countries — Mexico, Belize, Guatemala, and Honduras. 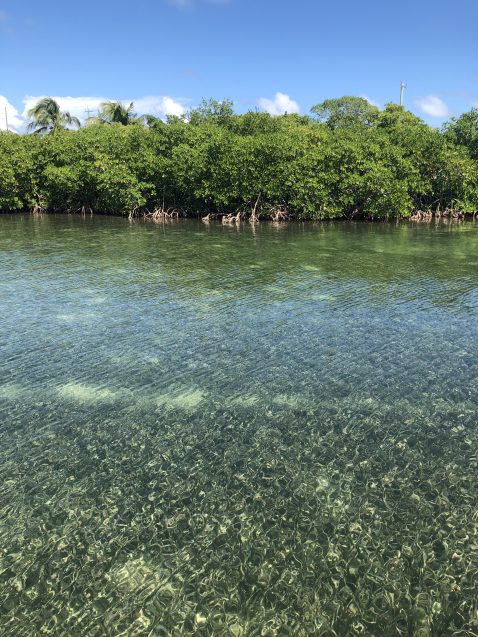 She worked along with Cynthia Rosenzweig, a senior research scientist at CCSR, and researchers at the NASA Goddard Institute for Space Studies, to figure out ways to conserve the fragile Caribbean ecosystem. The duo teamed up with the World Wildlife Fund and the four countries’ governments to provide climate risk information to guide local stakeholders on which adaptation measures could help protect local communities.

Local stakeholders used the climate risk information, together with other relevant information, to decide on an adaptation pilot projects in each of the four countries in the Mesoamerican Reef Region. In 2020, Belize merged the climate change analysis into its Integrated Coastal Zone Marine Plan for restoring coastal dunes and mangroves in the Yucatan Peninsula, and used the information to help set new emissions reductions targets under the Paris Agreement.

As a lead author on the UN Environment Programme’s 2020 Adaptation Gap Report, De Mel observed that only a tiny proportion of climate finance is targeted toward nature-based climate solutions, such as restoring coastal wetlands and coral reefs. These solutions are often low-cost and provide other benefits to local people and ecosystems.

While there is a growing emphasis on nature-based solutions, De Mel warned that without measures to cut down on carbon emissions, the effectiveness of adaptation projects gets minimized. During storms, hurricanes, or flooding events, mangrove saplings and coral farms can get severely damaged, for instance. In 2017, hurricanes Irma and Maria demolished 75 coral farms in Puerto Rico.

“We are now delving into how extreme events are affecting nature-based solutions in the field as they are being implemented,” said De Mel.

While in the process of wrapping up the project in the Caribbean, she is simultaneously scrutinizing how climate change is altering local ecosystems in a radically different landscape. 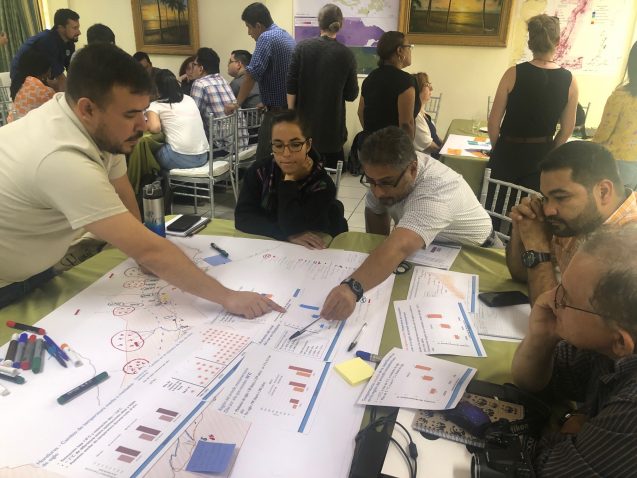 In high-altitude Himalayan areas, endangered snow leopards and their prey are bearing the brunt of rising annual temperatures, rapidly melting glaciers, and erratic precipitation patterns. In 2015, De Mel partnered with WWF to help narrow down which climate change elements could take a severe toll on snow leopard habitats across Asia’s High Mountains. The project included regions in Eastern Nepal, Sikkim (a state in the Indian Himalayas), Bhutan, and Tajikistan.

The researchers found that, “while direct changes in the climate such as increased temperatures are unlikely to cause harm to snow leopards themselves, impacts of climate change on habitats and prey populations are likely to cause many challenges for the species,” said De Mel. “As mountain areas continue to warm, they could become more suitable for agriculture and livestock, causing greater overlap between human uses and snow leopard habitat, leading to increased wildlife conflict. Identifying and planning for these ever-evolving challenges, while attempting to minimize poaching, human-wildlife conflicts and habitat loss, will provide the best chance for snow leopard survival.”

De Mel continues studying mountainous regions to date. In a recent study for the Wildlife Conservation Society, she and colleagues developed climate projections in the Panj-Amu river basin of Afghanistan.

The team found that by mid-century, the number of extreme heat days could increase in the western and central parts of the river basin. Over most of the river basin, the frequency of rare drought events — historically occurring every once every 10 years, on average — could increase by two to three times. And if emissions stay high, by the end of the century, permafrost areas in some regions might disappear locally, retreating to just mountain tops, which could threaten ecosystems and infrastructure.

The researchers also analyzed the Wakhan Corridor in eastern Afghanistan — a strip of rugged mountain territory that consists of semi-desert alpine and tundra regions. The researchers warned that even small increases in heavy precipitation events could drastically increase the risk of mudflows, erosion, flash floods, and landslides.

Despite these grim climate projections for some of the most vulnerable parts of the world, De Mel’s work highlights that it is important to recognize these disruptive pressures on society and natural ecosystems in order to plan ahead for them.

After working in other Asian countries such as Myanmar and Uzbekistan, De Mel is eager to continue reaching out to local communities and organizations in developing countries, working beside them and learning from them as well.

She recently co-edited a book called “Our Warming Planet: Climate Change Impacts and Adaptation,” to which 38 climate experts contributed. The book’s 25 chapters provide educational resources for students, teachers, and professionals.

The book is a continuation of the theme that weaves through so much of De Mel’s work: getting climate change information into the hands of people who need it most.