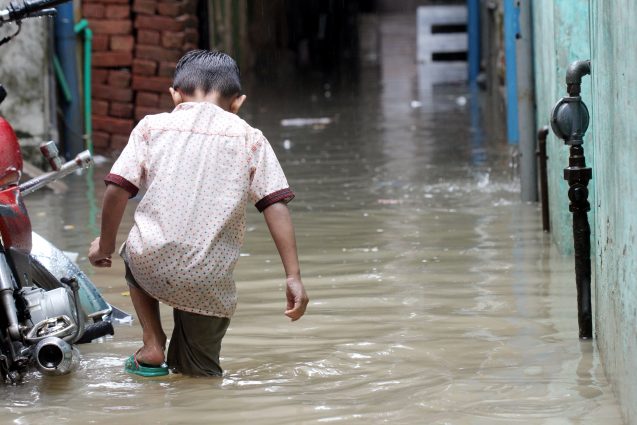 One-third of Pakistan is underwater.

Satellite images from NASA and the European Space Agency show the Indus River spilling beyond its banks, encroaching into nearby agricultural fields, and merging with Hamal Lake (30 miles away) to form one massive lake more than six miles wide and 60 miles long. 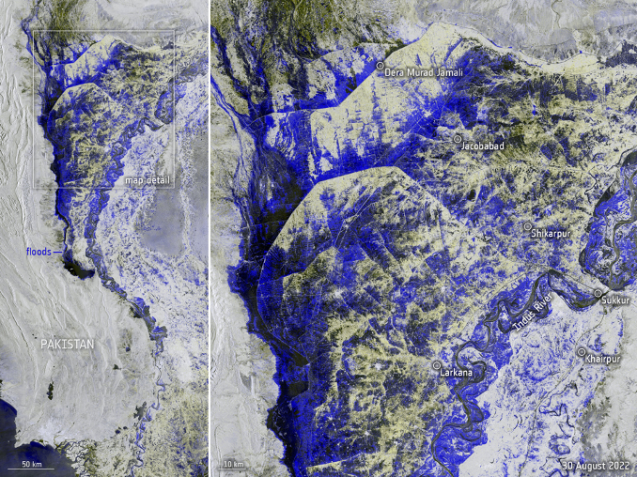 The image in the left window shows a wide view of the area affected and the image on the right zooms into the area between Dera Murad Jamali and Larkana where the Indus River has overflowed into a massive lake, tens of kilometers wide. The blue to black colors illustrate where the land is underwater. Source: European Space Agency, Copernicus Sentinel-1

On August 28, the Pakistani government declared a national emergency. But it was already too late.

Fifty villages have been submerged.

Ten dams and several reservoirs have been destroyed or breached.

Three million children are at high risk from disease and malnutrition.

Over a million dwellings have been damaged or destroyed.

Pakistan’s military has helped evacuate nearly 50,000 people across the nation.

Over 3,000 miles of paved and unpaved roads are inaccessible. More than 220 bridges have been destroyed.

After the flood waters dissipate, the final toll will be even higher.

Flooding is not uncommon for Pakistan. The devastation from the 2020 and 2010 super floods also made global headlines. But this current crisis is simply unprecedented.

How did Pakistan go from a record-breaking heatwave to being submerged in floodwater within a few weeks?

During the sizzling heatwave through May, millions of Pakistanis looked to the skies, praying for the relief of rains.

From June through August, summer monsoon rains dumped 190 percent more rainfall than normal, with the provinces of Sindh and Balochistan receiving over 410 percent and 466 percent above average, respectively. That’s nearly six times more than the 30-year average rainfall for that region.

At one point it rained for 72 hours nonstop.

These “monsoons on steroids,” or “monster monsoons,” as they’ve been dubbed, were fed extraordinarily high levels of moisture during the heatwaves that had scorched Pakistan just weeks before. Meteorologists had predicted that the record-shattering temperatures (exceeding 50°C or 122°F in some cities in Sindh) could cause “above average” levels of rain during Pakistan’s annual monsoon season.

Another factor in the flooding is that Pakistan is home to over 7,000 glaciers — the most glacial ice outside the polar regions. The glacial melt in April-May and the hottest summer on record, coupled with the unexpected arrival of a large-scale depression system from the Arabian Sea, set the stage for historic runoffs that could not be contained by the mighty Indus River, nor by the massive network of dams and reservoirs across its tributaries.

In addition to the millions who have already been displaced by the floods, on August 31, the Indus River System Authority was forced to authorize more evacuations to allow releases from dams as the inflows threatened to exceed the capacity of several reservoirs, with the risk of catastrophic breaches that would lead to even more flooding, deaths and destruction.

Over 2 million acres of bumper crops and orchards have been lost. Inflation has just hit a 67-year high.

Pakistan was already struggling with record-breaking inflation due to the global energy crisis. The recent infusion of $1.1 billion from the International Monetary Fund temporarily staved off Pakistan’s imminent default, but the cost of the flood damage has already risen to $12.5 billion.

The monsoons have also washed away or inundated connecting roads between villages and cities, further disrupting supply chains and sending prices of staples like onions, tomatoes and wheat skyrocketing. In a bid to hold off a severe food crisis (exacerbated by local profiteers hoarding food supplies) the Ministry of National Food Security and Research has permitted tax-free importation of vegetables from Afghanistan and Iran.

The first to be impacted, and the last to recover, are those who were most vulnerable to begin with: women, children, elderly, the disabled and refugees.

The floods have impacted 1 in 7 Pakistanis.

The millions who managed to survive fled their homes with just the clothes on their backs. Their humble mud-brick homes and belongings have either washed away or are irreparably damaged with a thick coating of sticky mud from floodwaters. Millions are taking refuge under open skies, without even a tent above them.

Extensive damage to roads and bridges is further delaying delivery of humanitarian aid in the hardest hit regions.

The 33 million displaced include thousands of Afghan refugees who were living in temporary camps in close proximity to the Indus. For many of these families, the flooding is their third or fourth displacement in this lifetime.

Over 1,400 clinics and hospital facilities have been partially or completely damaged in Sindh and Balochistan. Doctors and medical personnel are bracing for the outbreak of opportunistic vector-borne diseases, like acute diarrhea, cholera, dengue fever, gastroenteritis, malaria, polio, scabies, typhoid, and COVID-19, which can spread like wildfire among the temporary encampments.

The United Nations Population Fund (UNFPA) has come to the aid of over 650,000 pregnant women who are in dire need of healthcare, birth attendants, newborn care and mental health counseling. So far UNFPA Pakistan has secured over 8,300 dignity kits, 7,400 newborn baby kits, and 6,400 clean delivery kits for distribution among impacted women in Sindh, Balochistan, Khyber Pakhtunkhwa and Punjab. Women and girls also remain at risk of gender-based violence in the aftermath of disasters.

UNICEF (United Nations Children’s Fund) warns that over 3 million displaced Pakistani children are at high risk of malnutrition and waterborne diseases. It may take months to years to rebuild over 17,500 schools that have been fully or partially destroyed, further setting back the education of youth who were already impacted by COVID-19 closures.

The road to recovery, rehabilitation and rebuilding is going to be very, very long for Pakistan.

Millions of Pakistanis who were already living in extreme poverty, and who have lost family, homes, and their livelihoods, may never recover.

Pakistan is one of the global hotspots for climate change. In an appeal to raise for Pakistan, UN Secretary General Antonio Guterres could not have been clearer: “South Asia is one of the world’s global climate crisis hotspots. People living in these hotspots are 15 times more likely to die from climate impacts.”

Pakistan has contributed less than 1 percent of global greenhouse gas emissions, yet it is bearing the brunt of climate change-related extreme weather events. It is joined by 73 of the world’s poorest countries, who altogether have contributed to less than 10 percent of global greenhouse emissions, but are now on the frontline of climate-related devastation and ruin. 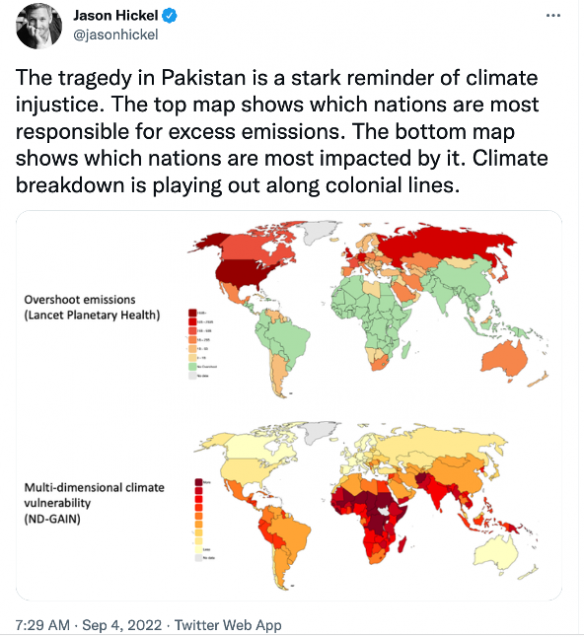 It remains to be seen whether the developed countries of the world will step up to finance critical adaptation infrastructure and capacity-building in these frontline countries in the next decade.

The continued existence of billions of people in the Global South will depend on it.

While Pakistan waits for the floodwaters to subside, the following gaps in existing adaptation and resilience should be addressed by the Pakistani government and disaster management authorities:

Community-based early warning systems are a vital instrument for saving lives. However, these systems are only effective if they are paid heed to by the local community.

On August 26, a mosque in Majooki, Charsadda, northwest Pakistan (population 120,000) blared an emergency flood warning to evacuate to higher ground. Tragically, for those who decided to shelter in place (assuming they’d be safe per the last flood in 2010), a few hours later, floodwaters breached a diversion dam, and ripped through their village. Among the dead was a five-month-old girl, who was instantly swept away.

In the age of climate change-related extreme weather events, observing every early warning system protocol will mean the difference between life and death for millions who are too poor to relocate away from flood-prone areas.

The lack of strict and universal enforcement of national and local laws and ordinances to prevent construction in flood zones is now amounting to a death sentence for millions of the poorest in Pakistan.

Up-to-date, district-level, searchable coastal and inland flood zone maps, should be available to the public on the National Disaster Management Authority’s website, as opposed to being buried at the end of monsoon planning reports. Citizens should be able to access these maps via cellular devices and type in their address (or location of informal settlements) to understand their flood risk.

3. Revamping the membership of the National Flood Response and Coordination Centre

In the aftermath of the floods, the Prime Minister, Shehbaz Sharif, announced the creation of a National Flood Response and Coordination Centre. The membership of this advisory body is visibly lacking representation of impacted citizens and any leadership from the local frontline communities, let alone inclusion of women, youth, persons with disabilities, the elderly, or refugees. 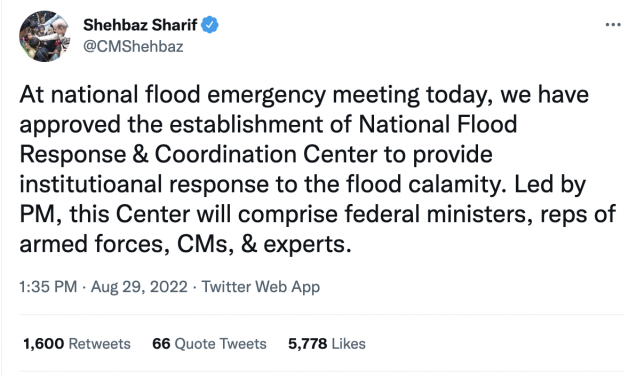 Detailed National Monsoon Contingency Plans going back as far as 2008 are available on the National Disaster Management Authority’s website. However, it is highly unlikely that these plans (in English) are accessible or even known to the vast majority of flood-prone communities in Pakistan that are already overburdened by extreme poverty and energy insecurity, and who would still need capacity building training to understand their specific roles in community-based disaster risk management.

As the eighth most disaster-prone country in the world, moving forward, Pakistan will need to incorporate disaster risk reduction and adaptation skills into the social studies curriculum taught in all educational institutions and at all levels, and hold regular trainings at community centers, such as mosques, health clinics, refugee camps. These trainings will help to ensure a baseline understanding of adaptation skills among the most vulnerable in the population.

In the near future, there is no other choice for millions but to learn how to survive the rising temperatures and flood waters.

The monsoons in Pakistan aren’t over yet. There is still another month of rain to come.

For a scorched, flood-ravaged and beleaguered Pakistan, adaptation and resilience must become a way of life.

A perfect carbon climate change storm, Western forest fires, carbon particulate rain, snow melt, glacier slip and ablation, and convergence of temperature. Pakistan government ought to support Western forest fire suppression, if not by personnel by plea for those who can. Farmers in the West, when they can, must sink carbon as they have the equipment and lands to do so. What we do matters because it impacts others.
Dan Hawk, Oneida, Iroquois Confederacy

Being this an academic institution, I would love to see every single number referenced, where did it come from, how was it estimated, etc.

No doubt, floods have wreaked havoc in Pakistan but all this was manageable with better governance. So essentially, its more of a man made disaster than a natural disaster.