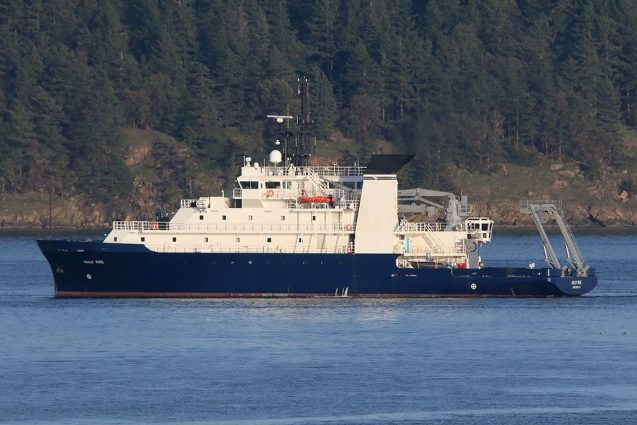 The All-ABOARD pilot project aims to build diversity, equity, and inclusion in the geosciences. In the fall, or as soon as pandemic restrictions lift, four teams will take part in a unique in-person retreat that will partially take place on a research ship (such as this one, the RV Sally Ride) operated by the U.S. Academic Fleet. Photo: U.S. Navy

Sailing on a research vessel is part of the job for many geoscientists. Those who have sailed recognize it as a transformative and novel experience that can cultivate long-lasting friendships, collaborations, and alliances. Previous and ongoing projects at Columbia University’s Lamont-Doherty Earth Observatory have utilized these benefits as a platform for broadening participation in the geosciences: for example, the School of Rock program empowers K-12 educators aboard the JOIDES Resolution, and the STEM Student Experiences Aboard Ships (STEMSEAS) program introduces geoscience opportunities to diverse undergraduates. Now, a new Lamont-led program called All-ABOARD is piloting a unique ship-based professional development model that will provide four teams of rising and established geoscience leaders with the tools they need to advance the goals of diversity, equity and inclusion (DEI) on their home campuses.

All-ABOARD is an acronym for “Alliance-Building Offshore to Achieve Resilience and Diversity.” This pilot program contributes to the diversity, equity, inclusion and antiracism work ongoing at Lamont, where awareness about the historic lack of diversity in the geosciences globally has led to a campus-wide mission. Lamont’s Sharon Cooper is leading the All-ABOARD project along with Benjamin Keisling, a postdoctoral research fellow in geochemistry. Both have been actively working on these issues at Lamont. Cooper also leads the STEMSEAS project and Keisling recently co-chaired the Lamont Diversity, Equity and Inclusion Task Force and launched “Columbia Climate Conversations” with Earth Institute intern Lauren Ritchie.

All-ABOARD creates a unique professional development model that provides four inter-generational teams of geoscience leaders — ‘intergenerational’ here means spanning from undergraduate students to graduate students, from early career faculty to deans and chairs — with the tools they need to advance the goals of increasing diversity, equity, and inclusion on their home campuses. Teams from Salisbury University, Coastal Carolina University, West Virginia University, and the University of Southern Florida (USF) comprise the first cohort. They were chosen through a competitive application process, through which each team described its goals and challenges in DEI. The project is funded through NSF’s Geoscience Opportunities for Leadership in Diversity – Expanding the Network. 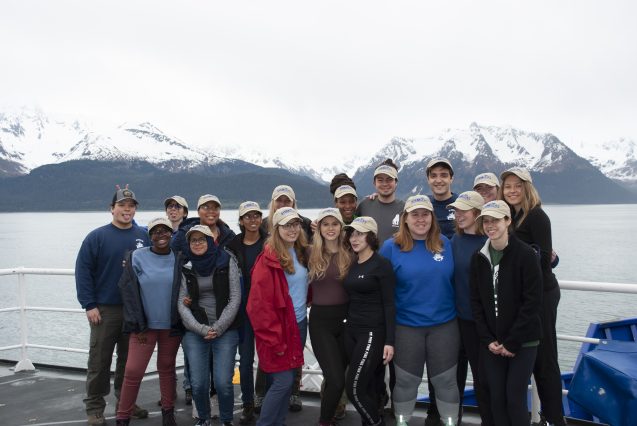 All-ABOARD builds on the power of shipboard experiences to create a new professional development model, expanding on models like STEMSEAS, shown here with program co-leader Benjamin Keisling and his group of undergraduates in 2019. Photo courtesy of Benjamin Keisling

“All-ABOARD aligns beautifully with our strategic goals at USF,” said USF team leader Brad Rosenheim, associate professor in the College of Marine Science. The USF team’s goal is to build upon its previous work and develop new strategies to increase the number of underrepresented students in ocean science, including road maps for improving student retention. “We’re particularly excited about the shipboard retreat and the representative design of each team, as we know firsthand the power of being at sea. When a team is aboard a vessel, away from the usual distractions of life on land, traditional barriers between senior and less senior personnel just vanish and authentic conversations can emerge.”

The teams, which met for their first webinar last week, will be working throughout the next two years on diversity issues, networking, resilience and leadership development at their own universities, implementing strategies that Cooper, Keisling, and the rest of the All-ABOARD leadership team will help them delve into during a series of webinars and tasks. In the fall, or as soon as pandemic restrictions lift, the teams will take part in a unique in-person retreat that will partially take place on a research ship operated by the U.S. Academic Fleet. It’s offshore where Cooper and Keisling believe the most significant work will happen.

“That retreat will be a centerpiece of the project,” said Cooper. Research expeditions have historically proven to be pivotal proving grounds for aspiring geoscientists. They are also where individuals can come together on equal footing and bond as people to begin building lasting and meaningful partnerships in service to their own on-campus DEI efforts. By partnering with Starks, Ph.D. in criminology and lead evaluator for All-ABOARD, Cooper and the rest of the team will test the hypothesis that investing focused effort on intergenerational teams in this unique context with sustained support will lead to a crucible in which potential DEI leaders are recruited, retained, and made resilient; institutional barriers are identified and addressed; and collective impact is maximized. 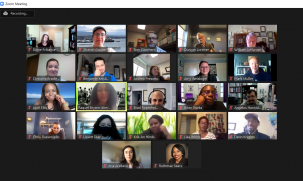 The All-ABOARD teams met for their first webinar on April 30. They will be working throughout the next two years on diversity issues, networking, resilience and leadership development.

The project leaders are also mindful that All-ABOARD is an opportunity to change how geoscientists think about field experiences. “A lot of the geoscience work takes place in the field. It takes place on ships and those can be really intense environments. Scientifically, a lot of amazing discoveries are made that way. Historically, these are also spaces that are pretty exclusive and can be harmful,” said Keisling. “We’re trying to look at these offshore experiences in a new way, as an opportunity to bring people together in mutual trust and nurture every participant into the kind of leader that all geoscientists need to be. That is at the core of what we’re doing.”

A diverse and safe field experience makes way for the best science, and for the strong collaborations that will lead there.

“People can give their full intellectual presence to their work when they know their inclusion and safety is prioritized,” said Keisling.

This pilot year will serve as a model for future work, exploring best practices of encouraging a diverse student community in the geosciences throughout the academic U.S. In a paper he co-authored last year, Keisling stated the imperative around this work:

“Geoscientists have a unique responsibility to cultivate diversity among our ranks. Calling Earth ‘home’ is perhaps the only common experience between all people and thus access to understanding and appreciating Earth must not be limited by societal inequities. Decades of concerted efforts to broaden participation of marginalized groups in geoscience have resulted in no progress on a demographic scale. Therefore, we must go above and beyond if we stand a chance of fulfilling our responsibility.”