On the northeastern part of Umnak Island in the eastern Aleutian Islands of Alaska, the Okmok caldera is throwing warning signs. Okmok is one of the most active volcanoes in the Aleutian island chain. 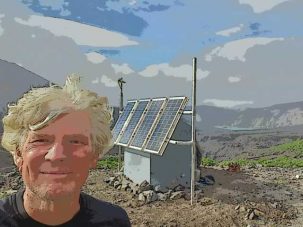 Nick and one of the newly-installed sites in Okmok caldera. It hosts a new seismometer, and next year, GPS and a web cam. The image is pixelated because it was sent from the low-bandwidth email on the boat. Photo: Nick Frearson

In late July, a normally dormant cone was steaming, and that was cause for some concern about new activity that could lead to the eruption of the shield volcano, more than six miles wide. Columbia University’s Lamont-Doherty Earth Observatory engineer Nick Frearson, who is co-principal investigator of AVERT (Anticipating Volcanic Eruptions in Real Time), finally had boots on the ground, and took a chopper directly over the cone to get a closer look.

He and Lamont graduate student Jasper Baur are in Alaska to continue AVERT after a more than a year’s pause in the action due to the global pandemic lock down. AVERT, which aims to create the first open-data, real-time, multi-sensor community experiment on active volcanoes, would directly benefit the 800 million people who live within 60 miles of an active volcano, by advancing the development of eruption forecasting.

For the past five weeks, Frearson and Baur have been at work on the caldera with Alaska Volcano Observatory scientists, installing a CO2 sensor and temperature sensor into the ground. This will enable scientists—for the first time—to measure CO2 leaking out of the ground, and temperature signals, in a timeseries all year, to test whether the ground warms before eruption.

Lamont volcanologist Terry Plank is the principal investigator. For her and the AVERT team, the pandemic delays have been frustrating.  “Our entire first summer field season (2020) was canceled, so this summer is the first time we have gotten in the field. We can only work up there in the summer, so this [the pandemic lock down] was a major delay.”

Plank’s team is not alone. At Lamont, a world-leading Earth and climate science research enterprise, the pandemic has forced a several month shut down of critical field work at a time when the consequences related to climate change are fueling crises around the world—triple digit temperatures in the Pacific Northwest, floods in Germany and China, and record breaking western wildfires.

The pandemic forced a sudden halt to observational research about Earth systems and the changing climate at a time when the world urgently needs answers. According to the National Science Foundation (NSF), about 90 percent of 150 international Arctic projects funded by the agency, across the spectrum of natural, physical and social sciences, cancelled their 2020 spring and summer field research expeditions.

Arthur Lerner-Lam, special advisor to the Columbia Climate School, also coordinates Lamont’s pandemic response. “The loss from the interruption of fieldwork can be incalculable, especially if it leads to a gap in the observation of time sequences of data. Much of what we know about the loss of polar ice, or of changes in ocean currents and circulation, or of animal migrations, or of atmospheric pollution, depends on continuous and continuing observation. For example, much of the 2020-2021 Antarctic field season was lost. A long gap in observations cannot be backfilled.”

Lamont’s field season typically sees as many as 50 to 60 expeditions, which take researchers to all corners of the globe—from exploring climate-related polar ice change to sampling deep below the sea floor. This spring and summer as pandemic restrictions began to lift, precious few field teams were setting off, picking up where they left off.

Lamont marine biologist Ajit Subramaniam was among Lamont’s first to mount seagoing research. For three years, he has been studying the Amazon River’s outflow into the ocean, exploring if and how the changes in the Amazon Basin—particularly Brazil’s deforestation increasing acreage for farmland—is affecting the ocean microbiome. This is a hugely important scientific question to answer. The ocean’s billions of tiny organisms form a major sink for atmospheric carbon dioxide, the most pervasive greenhouse gas.

While his journey to study the impact of Amazon River outflow was not delayed by the pandemic, it was fraught with pandemic-related complications that added weeks to the cruise.

The plan had been to depart from a Brazilian port. March 2021 was that country’s deadliest period. At least 1 in 382 Brazilian residents have died of COVID-19. Brazil travel restrictions forced a change in route. 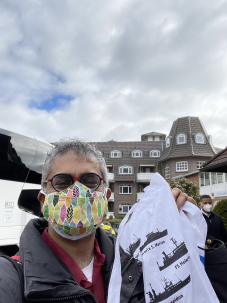 “We left [instead] from the Canary Islands,” which was the southern most European port that his German colleagues were allowed to join the ship. In addition, none of the Brazilian collaborators were allowed to fly to Europe, jeopardizing the permission to sample in Brazilian waters. “This led to a lot of last-minute tension as to whether we could work around the mouth of Amazon River and also lengthened the cruise by almost a month because we transited from the Canary Islands across the Atlantic to the Amazon. And then when we were done with our work we transited all the way back from the western tropical Atlantic back to Germany.”

The early resumption of fieldwork posed other kinds of challenges. For many if not most scientists, this first field trip was the first foray back out into the world.

Subramaniam’s long journey to the Amazon started from his Upper West Side apartment on March 30, 2021. He took a Lyft to Newark International Airport for a one stop evening flight to Frankfurt, Germany. He said the one stop at Washington, D.C’s Dulles Airport “freaked him out” because there were so many people. It was the first time he’d seen that many people since March of 2020. The plane itself was also packed, further stoking Subramaniam’s anxiety.

Meanwhile, his colleagues traveling from various places in the U.S. and around the world, were racing time to make connections and get to Frankfurt within the 48-hour window in which a documented negative COVID-19 test would gain them entry into the country.

For Subramaniam, negative COVID test in hand, his connections went flawlessly. But when a colleague in Tuscon, Arizona, missed her connecting flight, the pressure was on.

Despite some tense moments, Subramaniam and his 22 collaborators all made it to Germany and then were placed into a strict two-week quarantine in a German hotel. 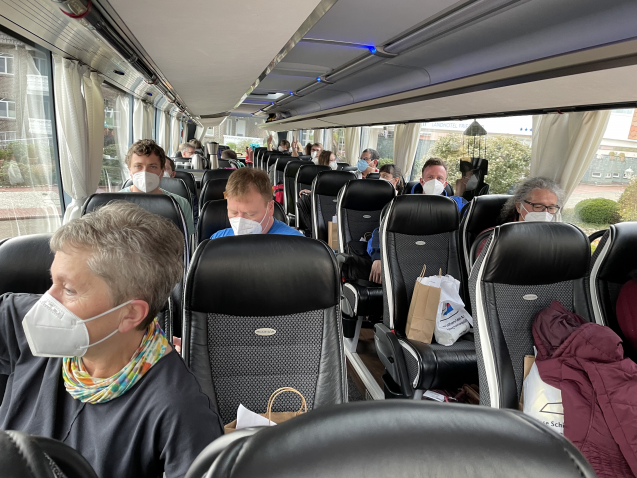 The research team on the bus to the airport. Photo: Ajit Subramaniam

Being out on the open sea for more than 60 days brought other pandemic-related challenges.

The team returned on June 2nd. The cruise was a success, yielding an important collection of samples still under analysis. Subramaniam actually credits the pandemic-related detours with expanding the reach of the project. “It improved the science because for me if gave me a chance to sample all the way across the subtropical Atlantic…I wouldn’t have done this otherwise.”

This benefit is an exception to pandemic-related delays. 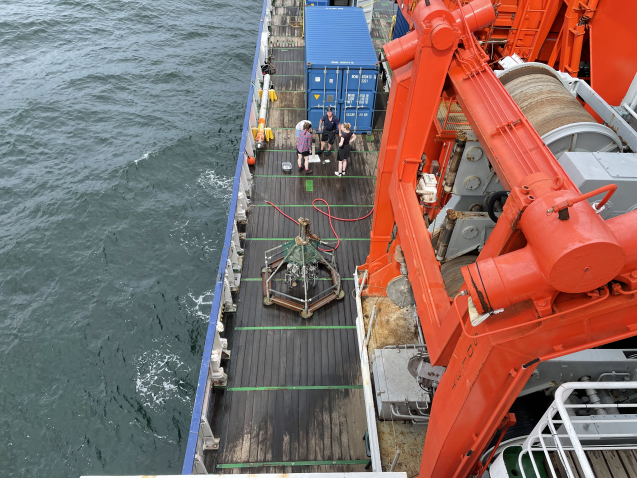 Some 5100 miles away from the Amazon, off the west coast of the U.S., Lamont marine geologist Suzanne Carbotte was leading a team of scientists and students from Columbia University, University of Texas Institute for Geophysics, Woods Hole Oceanographic Institution, University of Washington, and Oregon State University/NOAA on a 40-day mission at the Cascadia Subduction Zone. This after a full year delay in the expedition.

“This subduction zone has been the site of past ‘megathrust’ earthquakes, which are the largest earthquakes that happen on Earth,” Carbotte explains, “but is eerily quiet at present, with little seismicity detected within the Oregon to Washington portion.”

“Scientists believe this lack of seismicity reflects the ‘locked’ state of the megathrust fault at present, with stress quietly accumulating as the Juan de Fuca plate system continues to dive (subduct) beneath North America. All or part of that built-up stress will eventually be released in the next great earthquake.”

During the cruise, the team used sound to probe under the seafloor looking for the megathrust fault deep beneath several kilometers of sediments that cover the down-going Juan de Fuca plate. It was the first-ever seismic imaging study to span almost the entire Cascadia subduction zone.

Carbotte remarks that she and the team were thrilled to be back out at sea and at work doing research of critical importance to the planet. “The last great earthquake at Cascadia occurred on January 26, 1700, and is estimated to have been a magnitude 9 — similar to the devastating 2011 Tohoku earthquake in Japan.”

Is it possible to make up for lost time in answering such critical questions about earthquakes, volcanoes, ocean biology, and polar ice?

Lerner-Lam notes that the advent of real-time technology helped stem the losses. “For example, weather satellites, earthquake monitoring, and drifting ocean buoys continued to operate throughout the pandemic. Problems sometimes arise when maintenance crews cannot travel to instrument sites, but those losses were minimal.”

Still, he said, there is no substitute for “boots on the ground,” especially when dealing with scientific surveys in remote locales. “Getting back to normal is still essential if we are to understand the rapid changes in climate, weather and our environment now underway on our planet.”

Plank said the AVERT project has lost some important ground. “The major setback has been to students and postdocs seeking jobs.” Plank worries about losing talent as promising post doctoral researchers are forced to take jobs outside of Earth science research.

Lamont expects more fieldwork projects will be moving forward this fall, all under the watchful eye of Columbia’s strict COVID ramp-up policies.

“We’re looking [forward] to a gradual ramp-up of the intense fieldwork for which Lamont is known as the global vaccination campaigns proceed, and as more is understood about the virus and its variants,” said Lerner-Lam. “Getting back to normal is still essential if we are to understand the rapid changes in climate, weather, and our environment now underway on our planet.”

Very interesting piece! It’s fascinating how Subramaniam and his team were able to adjust their plans and obtain data for a cross-Atlantic transect, rather than focusing only on the Amazonian basin.