Sailing Around the Bangladesh Coastal Zone

I am now on a boat in southwestern Bangladesh, the M/V Kokilmoni. However, getting to this point involved some of the most complicated logistics of any project I have had here. We faced problems with insurance, shipping the equipment, getting the right batteries, visas, and the list goes on. Finally, everything got sorted out and we have been able to start our 25-day cruise only a few days late. On this trip, we are doing a new kind of measurement for me that will investigate a different issue than I usually study. 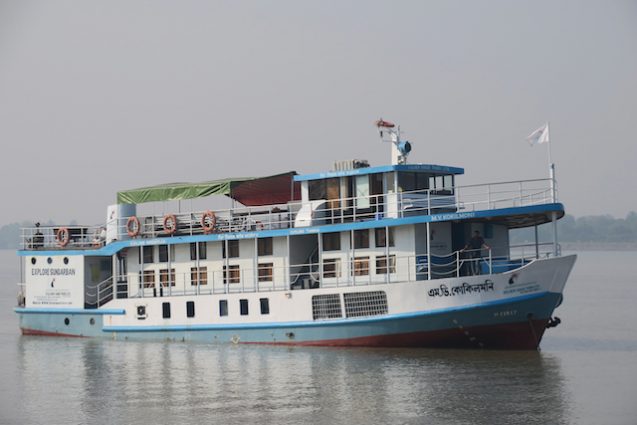 The M/V Kokilmoni, our home for the next 25 days as we sail around Bangladesh making measurements

In large parts of the coastal zone of Bangladesh the groundwater is salty. This limits rice growing to just the rain-fed Aman rice in the summer to fall. For drinking water, they have to store the monsoon rain in ponds. However, deep in the earth, in sediments from the last ice age, fresh water can be found. It is used in some places, but a well deep enough to reach it is too expensive for most farmers. Another issue is that little is known of the extent of this deep freshwater aquifer. I have teamed up with a new set of colleagues to image the saline and fresh groundwater in coastal Bangladesh. 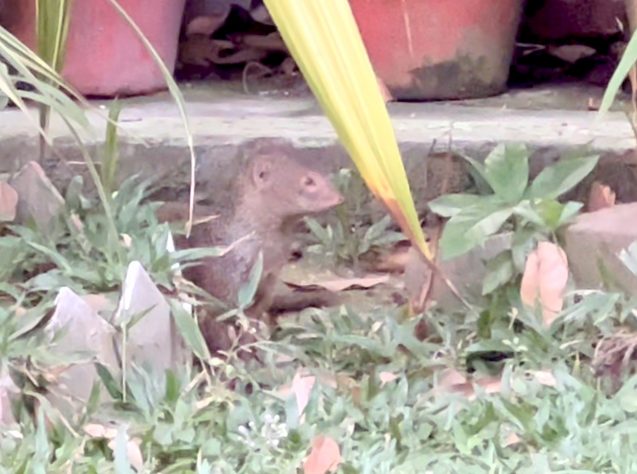 Kerry captured a movie of the mongoose living in the garden of our hotel in Dhaka. Click the image to watch.

Since salt water conducts electricity much better than fresh water, we will be using two electromagnetic methods to image the distribution of fresh and saline groundwater along two rivers in Bangladesh. To do this, we have shipped 1400 pounds of equipment here. Kerry Key, also from Lamont, is our electromagnetic expert and Mark Person from New Mexico Tech, the head of this project, is our groundwater expert. We are here with their students, along with Anwar Bhuiyan and several students from Dhaka University. 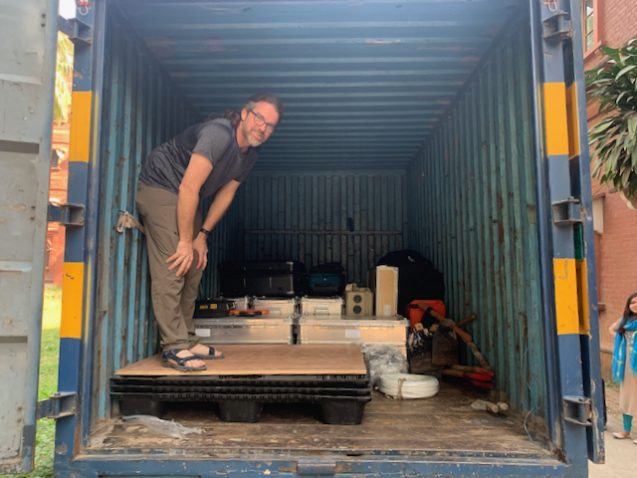 We arrived a few days early in Dhaka for meetings and to make sure we got the equipment released from customs in time. With the help of Anwar, we were able to get it the night before we were due to leave Dhaka. On the day we left, we had to wait until we got the correct deep-cycle batteries before leaving. We then headed out on the long drive to Khulna to meet the boat. With Anwar’s help, we got VIP treatment at the ferry crossing the Padma River, as the combined Ganges and Brahmaputra are called, and did not have to wait long for a ferry. We even got invited for tea by some government officials on the ferry. The new bridge across the Padma is almost done and will be opened this summer, significantly shortening the time to drive to Khulna. 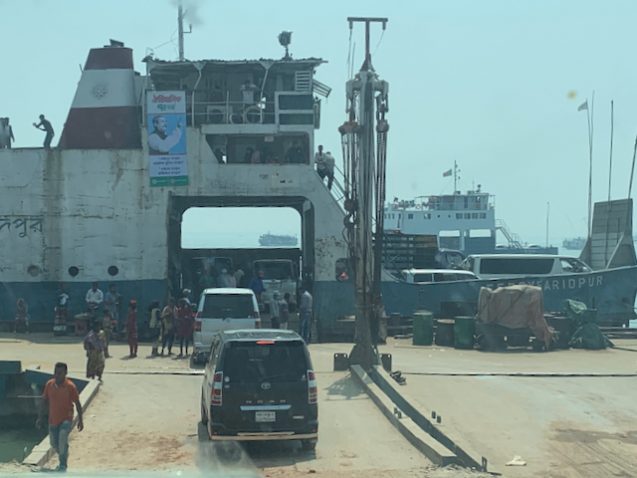 We arrived in Khulna around 6 pm and our caravan of three vans and one truck drove straight to the ghat (dock). The ship’s crew met us and carried the multitude of equipment boxes and luggage to the waiting wooden country boats. We settled in, had our first dinner on the Kokilmoni, and started finalizing the locations of our sites. Chris Small back at Lamont processed Sentinel-2 satellite data to show percentage of vegetation, water or shadow, and substrate (soil) for each 10-m pixel. That let us pick the exact locations of the barren fields for our deployment.

We crossed under the nearly complete 6.1 km long Padma Bridge.

We are focused on training for our first day so the entire group of 12 stayed together. Only a few of us have experience with this type of measurement. The magnetotelluric (MT) instrument uses radiation from the sun to image the structure below the instrument. High frequencies give shallow results and lower frequencies give deeper results. As we are focused on the upper few hundred meters, we will only be deploying the instruments overnight. 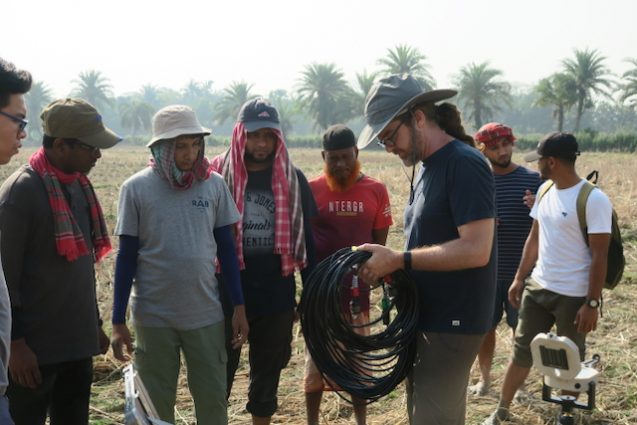 Kerry explaining how to set up the equipment while holding a magnetometer cable.

At each site we have a central recorder and battery. These are connected by cables to north-south, east-west and vertical magnetometers. These are cylinders about three feet in length that need to be buried. The most difficult is the vertical and we brought post-hole diggers to get them in the ground. Finally, there are small electrodes for the electric field that are placed approximately 50 meters away from the center in the four cardinal directions using a compass and electronic rangefinder. They also need to be buried to minimize noise. 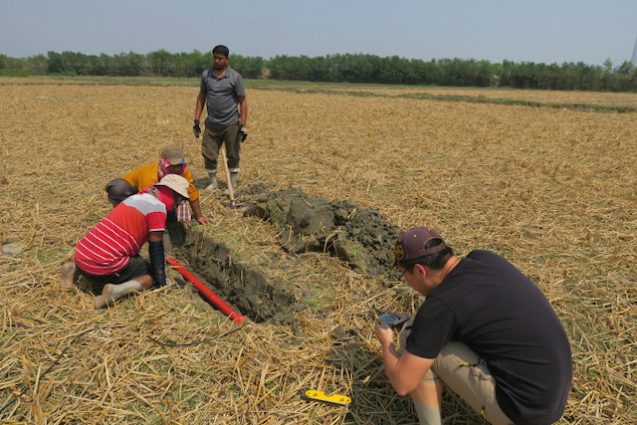 Huy making sure the magnetometer is horizontal and aligned north-south before burying it.

Arriving at the first site, we found a large fallow rice field in which to install the MT station. Kerry explained all the components and the procedure for installing them, and we slowly went to work. At each site we hired a local farmer to watch over the equipment overnight. It is important that nobody goes in the 100 m x 100 m area of the deployment as the equipment is sensitive enough to detect people walking by. By the second site, we were noticeably faster at getting everything deployed. In fact, we became efficient enough that we managed to install a third site on the first day. At the second and third site, we discovered one problem that Chris Small’s satellite images could not capture: cows and goats. Not only could they result in distortions of the signals, but especially the goats could eat the cables. Choosing the fields that minimized grazing livestock became as important as other aspects of choosing sites. 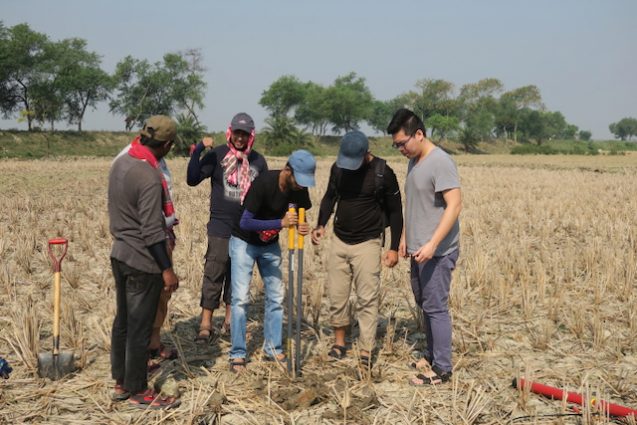 We brought along posthole diggers for installing the vertical magnetometer.

On the second day we circled back and recovered the stations, learning how to properly do it so they are ready to be deployed again at the next station. We spent the morning recovering the three sites and paying our overnight guards. Then, in the afternoon, we deployed three additional sites. One of the sites is at the home village of one of our boat crew. We met his mother and uncle while working at that site. Our original plan was to split into two groups for recovery and deployment. However, with so many people, and especially the help of the crew of the Kokilmoni, both deployment and recovery are very fast, so we decided to try to continue as one team. The ship’s crew is doing all the heavy carrying of the equipment to and from each site, and digging the holes for the magnetometers. 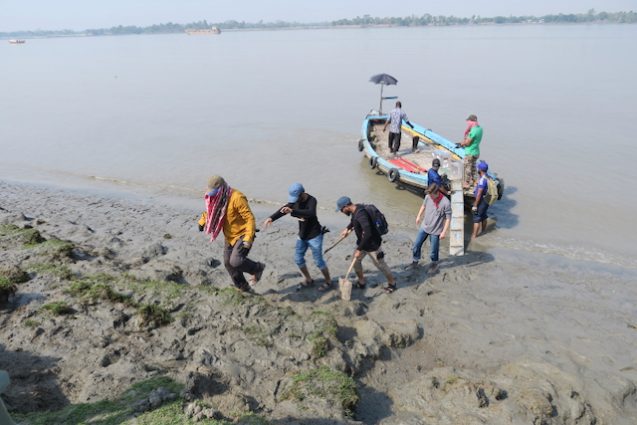 Carefully getting off the country boat that brings us to shore in the mud along the Pusur River.

Meanwhile, Kerry took a preliminary look at the data from the first sites and they look good. We are all excited about the potential success of this new method, which has never been used in Bangladesh before this. 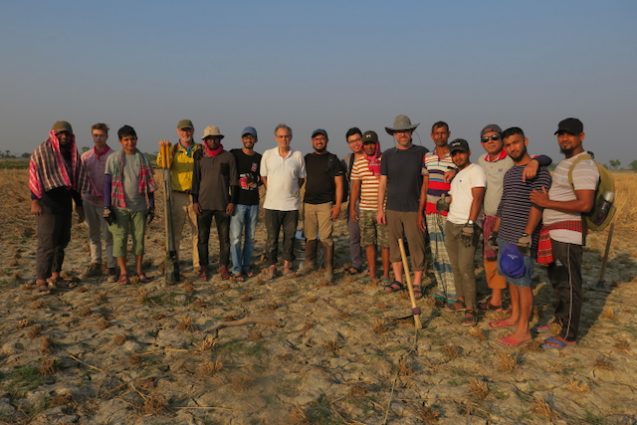 Our assembled team including a local farmer and our boatmen who are proving incredibly helpful. 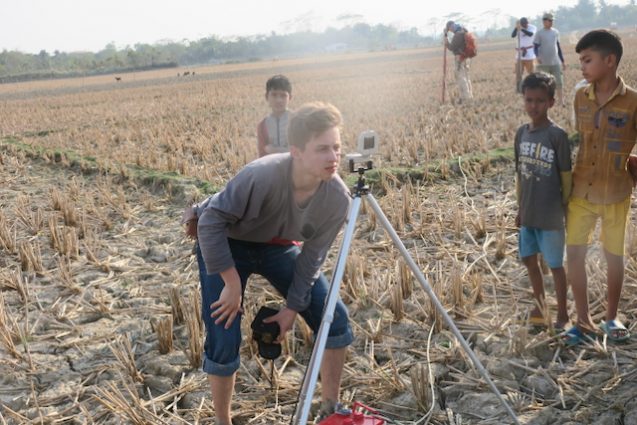 Adrien using a compass to align the direction of one of the electrodes. 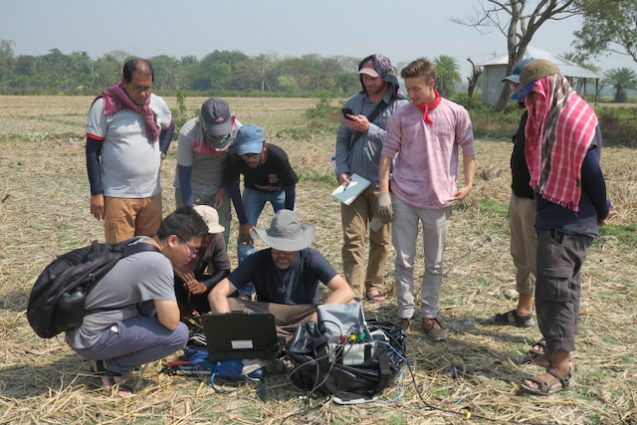 Kerry checking the quality of the data downloaded from our first site.