Dealing With Rain and Rats

On the morning of the Muslim holiday of Eid al-Fitr, we had a downpour. We could not eat the celebratory breakfast by the Humayun’s garden at the vice-chancellor residence, although it was still outside. On most days we have breakfast at 5:30 am so we can get an early start before the heat of the day. For the Eid, we got to sleep in with breakfast around 9 after prayers. 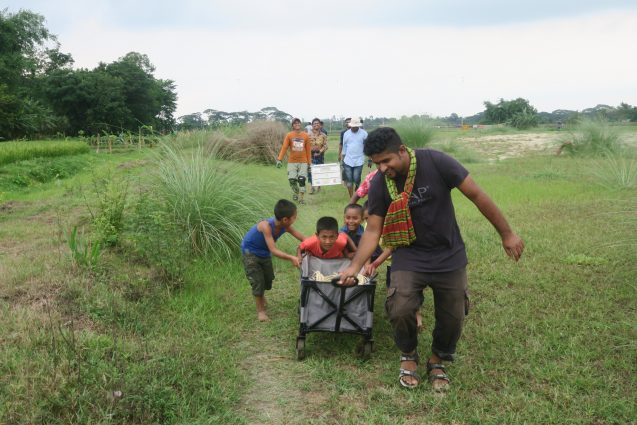 A group of local children help Masud pull the wagon full of equipment through the field to our site.

The Eid gave us a late start for another day of installing magnetotelluric (MT) instruments in northeast Bangladesh. These instruments use the sun’s electromagnetic radiation to look into the earth and see more conductive and resistive layer below the surface. We are doing multiple day deployments to image the subduction megathrust, the thickness of the sediments, and depth to the Moho, the base of the crust. To record the data, we must lay out electrodes and magnetometers around a central recorder. 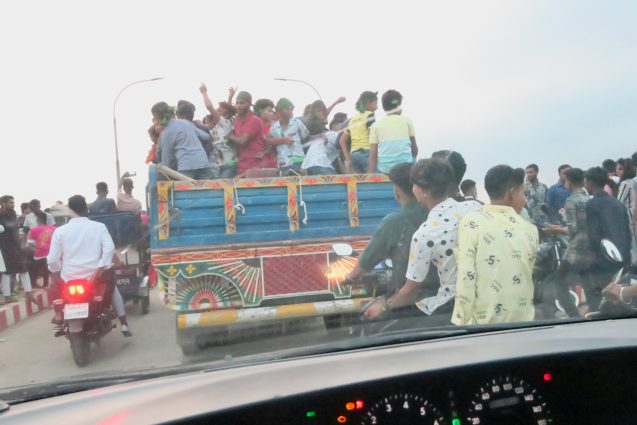 When Ramadan ended and the Eid began, we saw lots of trucks with partiers. Here we got stuck in a traffic jam on a bridge behind one of them.

We started by going to a site we scouted the day before. It is in a slightly uplifted area where reddish, older Pleistocene sediments are exposed. We believe that this is uplifted because of a folding of the sediments as they enter the subduction zone. The rivers in this region have been widened by people to create broad flat areas for rice cultivation. We drove and walked through the more forested uplands with lots of jackfruit trees, and into the rice fields. We found that the field we had picked out the day before now had an inch or two of standing water. We needed another place. With more rain in the forecast, we were now concerned about flooding in all of our sites. 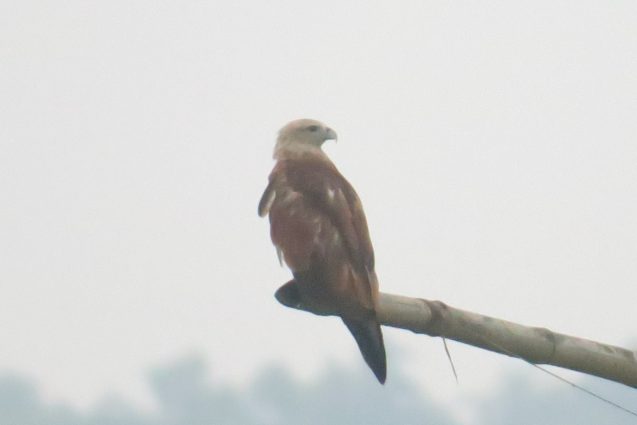 While we picked up a site in a rice field, we saw kites flying around.

Luckily, the farmer who was going to watch the site for us owned some nearby forest land that was not settled. Although there were rice fields nearby that were not flooded, we opted for the forest since there was more rain in the forecast. We went over found the patch of forest was just large enough to fit our array if we shortened the electrode wires. Since this deployment would take a long time, we left it for the next morning. We headed farther east to the site that Samer and Arman scouted. 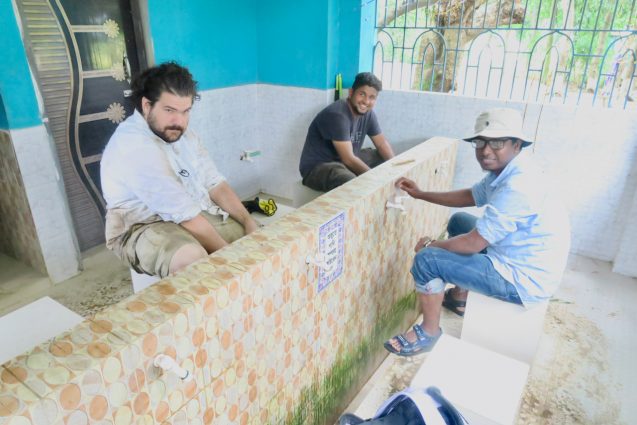 Oliver, Masud and Biplab cleaning the mud off their feet as the washing station of a mosque.

Here was a site along a small river along a path that the mighty Brahmaputra River used to flow. The archeological site of Wari-Betashwar is not too far. It was built on the uplifted forest land, which doesn’t flood, with access to the Brahmaputra. It flourished as a trading center from 450 BCE to 600 CE, when the Brahmaputra shifted channels and another city replaced it. It shifted again before a larger avulsion shifted the entire Brahmaputra River system up to 100 km west to its current position a little over 200 years ago. 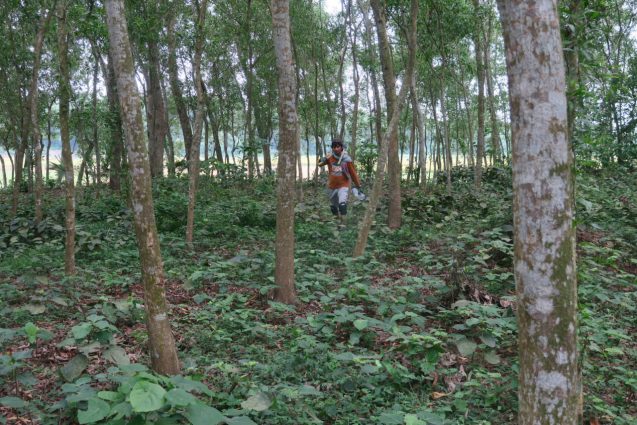 Arman walking through our forest site.

Due to the former presence of the Brahmaputra, the ground is sandy. This means it drains well and won’t flood our equipment. This site is closer to a village and lots of kids joined our team. One of them helped when we had to run an electrode wire under a frame growing squash. He and his friends then helped dig the hole for the electrode itself as well. We were successful, but still concerned about finding sites that will not get flooded. 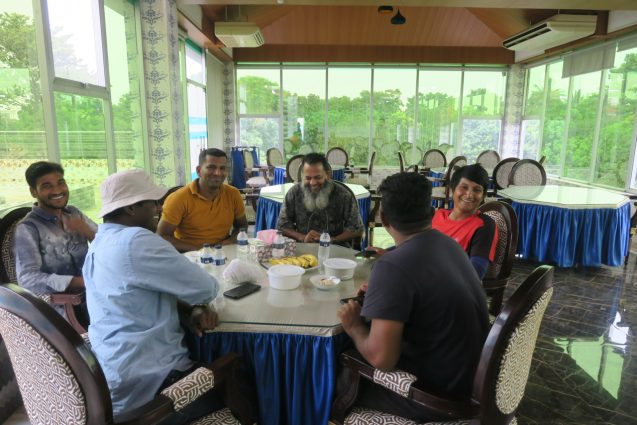 Our last breakfast at the vice chancellor’s residence at Bangladesh Open University before moving to a hotel farther east.

The next day, we went out to pick up our first site and deploy it farther along the transect. What we found was that one of the electrode and magnetometer cables had been cut. It was possibly a fox, but most likely rats, which are very large here. We also heard from one of the watchmen at another site that wires had been cut. Now we had a new very serious problem. The electrode wires are coated in a substance that rats do not like. What we are finding is that they take a first bite, decide that they don’t like it and leave the other cables. However, by then the damage is done. Once one of the electrode or magnetometer cables is cut, the data cannot be used. While the single wire in the electrode cables is easy to repair, the magnetometer cables with eight thin wires is much more difficult. 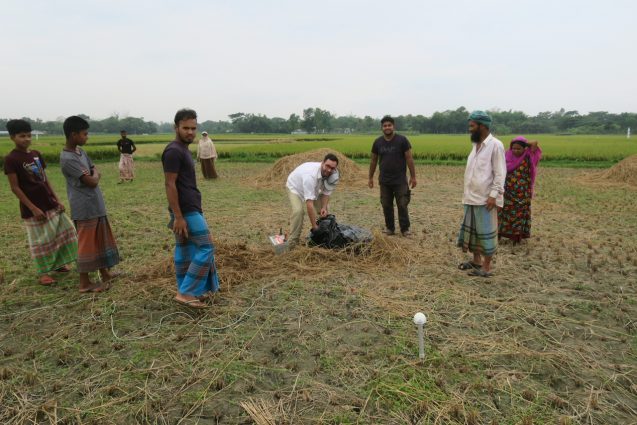 Samer opening the trash bag containing our equipment so see if it is still working.

After retrieving the first site, we went to the other broken site and picked that one up as well. We tried to scout for a new site, but was unsuccessful. The area was too heavily populated with too many electric wires crossing every which way. We drove back to Bangladesh Open University (BOU), where we were staying, but it was too late to pick up another site. We just stopped for some food along the way. 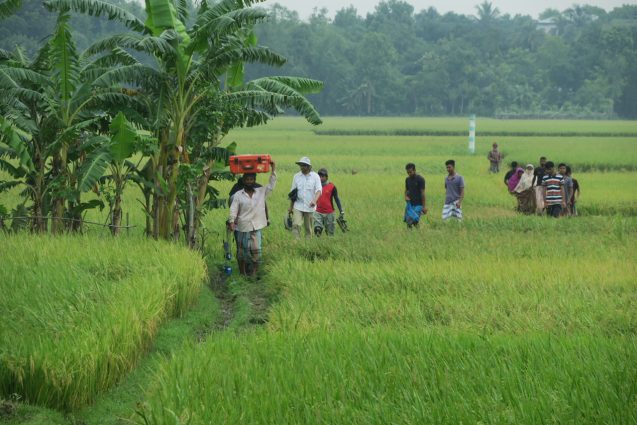 Our train of people carrying our equipment back through the rice fields.

The next morning, we prepared to move to another hotel. Our line is extending too far east of BOU. We hired a small truck and packed up everything. We stopped at our first LP site and found both that it was closer to an electrical line than we thought and that one of the electrodes was cut. At the next site, the first we had installed, we found more cut wires. We were now getting concerned about collecting sufficient good-quality MT data here. Plus we were working from 5:30am breakfast and not returning until 8-8:30pm in the evening. Our pace is not sustainable. 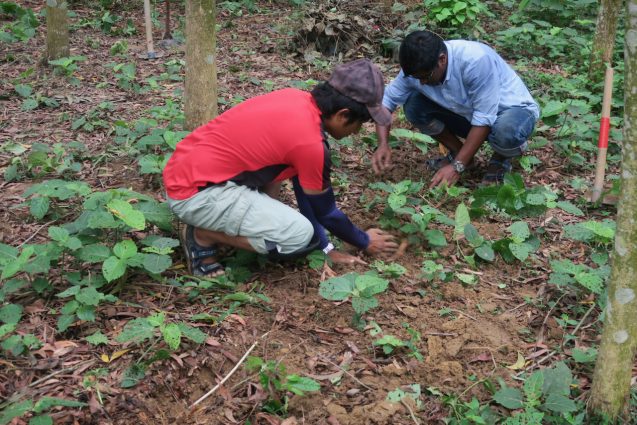 Arman and Biplab burying the magnetometer cable to protect it from rats and foxes.

The next site we needed to pick up early because they needed to harvest the rice because of the rain. It was intact, at last. Perhaps it was because the wires went into rice fields and were suspended on the rice plants instead of on the ground.  We were a little buoyed but still concerned about how to keep the wires safe from rats and foxes. We drove across the Meghna River and checked into our hotel around noon. 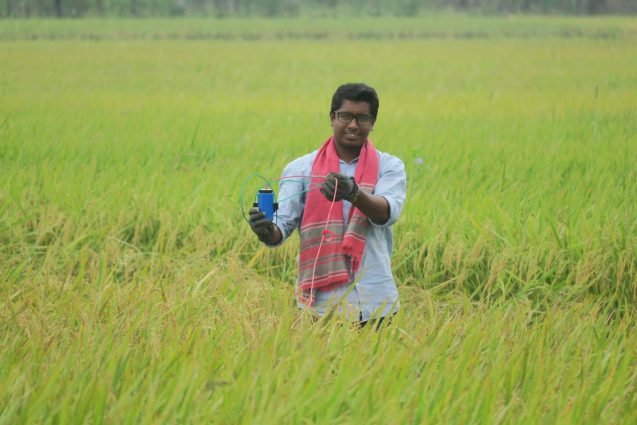 Biplab recovering an electrode from a rice field.

We finally had a sit-down lunch for the first time since we arrived. We lowered our expectations. We need to slow down and put more work into keeping the wires safe.  Samer, Masud and I went shopping for neem oil, which rats don’t like, but could not find it. Instead, we will try chili oil. If that doesn’t work, there is encasing the wires in PVC tubes or burying them.

We split up to visit our last two remaining sites west of the river. I went to the forest site while Samer went to the sandy site near a river. We found it still working. Just in case, we buried the magnetometer cables and covered parts of the electrode cables with dirt. Samer’s team found that foxes had severed some of their cables. They spread chili oil over the wires. While they managed it, they found it wasn’t practical, too large a chance for people to get chili oil on them and then rub their eyes. The next day, we picked up the two sites and headed across the Meghna River to Sylhet. 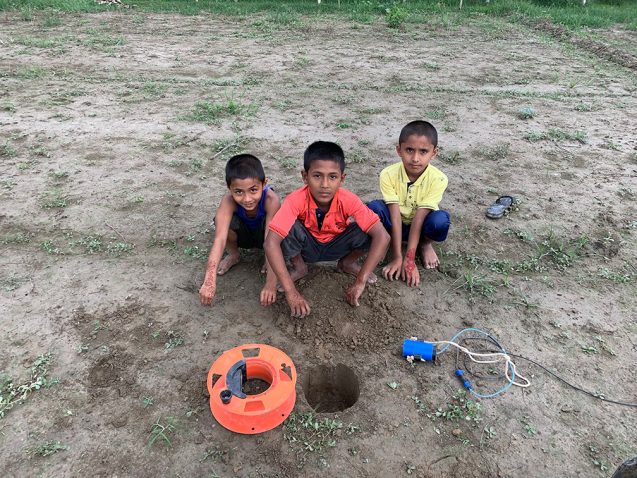 The kids that helped my run the electrode wire and dig the hole for it at the sandy site.

We are working at a pace that is not sustainable, trying to install two sites per day. We are going from 5:30 am to 8:30 pm. We are going to cut back to one site per day, or less with scouting. We also need to be more careful about the site locations and power lines, particularly for LP sites. We are going to have to trench all of our cables to avoid the rats and foxes chewing on them. Although they don’t like the taste, their first bite ruins the site. We will have fewer, but more carefully selected sites as we continue to the east. With our revised plans, the next day, we picked up the two sites and headed across the Meghna River to Sylhet.