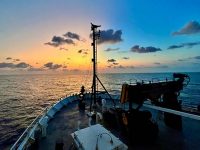 Looking for the Origin of Slow Earthquakes in the Guerrero Gap

We are underway on our 48-day long expedition offshore of the west coast of Mexico near Acapulco, where the young Cocos oceanic plate dives beneath the North American plate. Most of this subduction zone, often referred to as ‘the Mexican segment of the Middle America Trench,’ has produced large earthquakes in the last 100 years, including the dramatic 8.0-magnitude Michoacán earthquake in 1985 that killed more than 10,000 people in Mexico City. One of the exceptions is the Guerrero seismic gap. This portion of the Mexican subduction zone has not ruptured in a large (M>7) earthquake since at least 1911. Instead, large and relatively shallow slow-slip events — which release energy slowly over days to months without generating strong seismic waves — occur there approximately every 3-5 years.

Up to now, we do not fully understand why the Guerrero gap has a distinct slip behavior than its neighboring segments that regularly rupture in great earthquakes. Fluids (e.g. seawater) delivered into the subduction zone by the incoming oceanic plate are commonly invoked by scientists to explain the occurrence of slow slip events in other subduction zones worldwide, although evidence of fluids in the Guerrero gap and elsewhere remains very limited. With this project, we want to better quantify the volume and distribution of fluids in the incoming oceanic plate, their fate at depth as well as the variations in the amount of fluids between the Guerrero gap and its neighboring segments in order to explore how fluids contribute to the presence of slow-slip events in the shallow part of this gap. 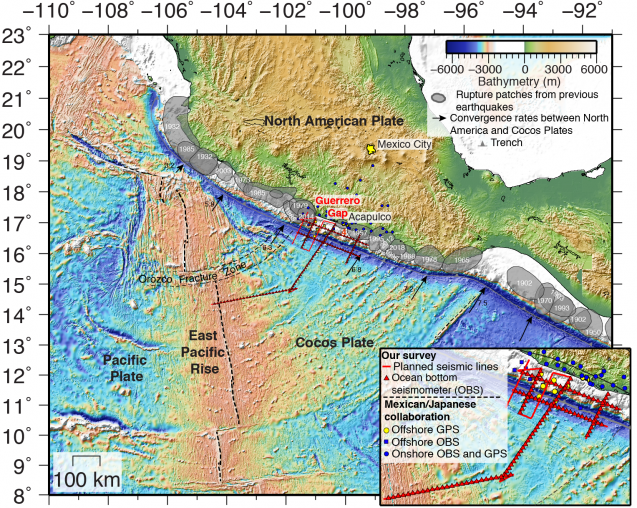 Map of our survey plan in and around the Guerrero gap offshore the Pacific coast of Mexico near Acapulco.

During our cruise, we are using sound waves to probe under the seafloor to look for the plate boundary fault zone or ‘megathrust fault’ (where the two tectonic plates meet on the seafloor) down to a depth of about 15 kilometers, and to characterize the architecture and properties of the downgoing and overriding plates. For our investigation, we are making use of Columbia University’s R/V Marcus G. Langseth operated by the Office of Marine Operations at the Lamont-Doherty Earth Observatory. Our survey, which is funded by the National Science Foundation, will be the first-ever active-source seismic imaging study within the Guerrero gap and its neighboring segments.

In the first part of the cruise, we are using ocean-bottom seismometers from the Ocean Bottom Seismometer Instrument Center at the Woods Hole Institution of Oceanography. We deploy the seismometers on the seafloor along pre-defined profiles to record sound waves generated by the high-quality and powerful sound source of the R/V Marcus G. Langseth. The reflection and refraction of the sound waves through the subseafloor will provide important information about the properties of the different layers in the subsurface (e.g. their composition and presence of fluids).

In the second part of the cruise, we will be using the same sound source and will be towing a 15-kilometer-long cable that comprises 1,200 hydrophones spaced 12.5 meters apart. This long cable or ‘streamer’ will record the echoes coming from different layers in the subsurface and produce images of the architecture of the subseafloor, including the amount and style of faulting. 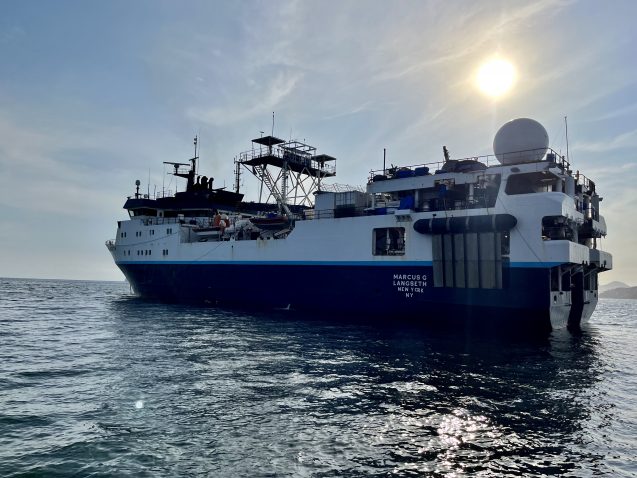 This project involves a strong collaboration with Mexican and Japanese collaborators. Mexican collaborators from the Universidad Nacional Autónoma de Mexico (UNAM), Víctor Manuel Cruz-Atienza and Jorge Real-Pérez, are sailing with us. Since 2017, they have had an amphibious array of broadband seismometers and geodetic stations deployed in the Guerrero Gap. This array is able to record small background earthquakes and tectonic tremors, as well as silent deformation associated with slow-slip events or stress build-up. Combining our active-source seismic observations with their passive-source seismic observations will be a very powerful tool to understand how this seismic gap works, with the ultimate goal of better assessing the long-term earthquake potential of this anomalous region and the associated hazards for local Mexican inhabitants. 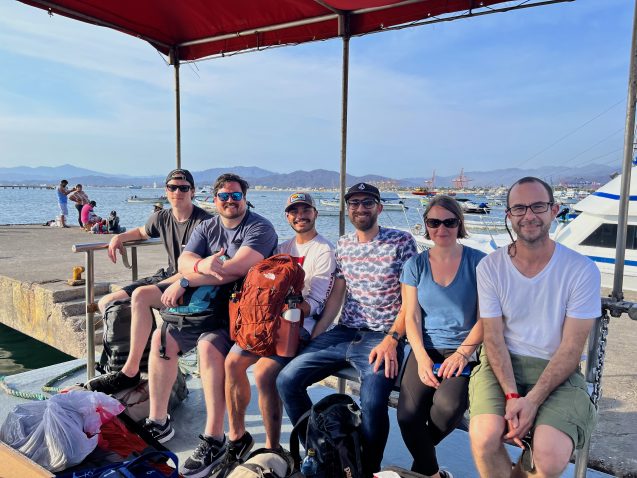 Enjoyed reading about the upcoming activities and look forward to updates. Thanks for everything you do!