Discussions after a major storm seem to follow an all-too-familiar script: Why weren’t the prediction models more accurate? Why weren’t more people evacuated earlier? What could have been done differently? How can we do better next time?

As Hurricane Ian recedes, leaving behind a rising death toll and miles of destruction in its wake, questions about how preparedness and evacuations were handled in the hardest-hit areas are mounting. 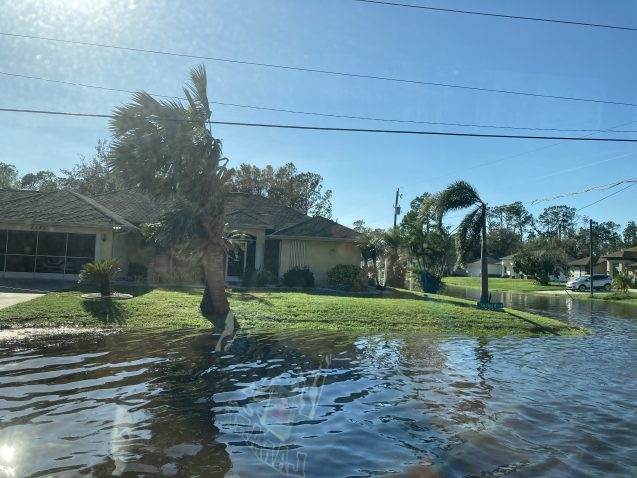 Flooding and wind damage in the aftermath of Hurricane Ian. Photo: PCHS-NJROTC via Creative Commons

“There’s always a tradeoff when it comes to preparedness,” said Jeffrey Schlegelmilch, director of the National Center for Disaster Preparedness at Columbia Climate School. “Do you evacuate? How aggressively do you evacuate? Even when you have mandatory evacuations, a lot of people still choose to stay behind, and others can’t evacuate. And I think that’s what we’re seeing right now with Hurricane Ian—a lot of people stay behind for a variety of reasons.”

One major challenge with Hurricane Ian, though not unique to this storm, was the degree of uncertainty surrounding where it would hit. “At first, it was heading toward Tampa and then it steered more to the south. These little swings can be the difference of millions of people having to evacuate or not,” Schlegelmilch said.

A community’s collective experiences and memories of previous storms also complicate the evacuation process and can supersede more objective warnings. “Our memory and experience of similar storms describes a lot more,” than the data, he explained, “and this goes all the way down to the individual level as well as all the way up to elected officials and emergency managers.”

While Hurricane Ian was a Category 4 storm, which is undoubtedly serious, “Florida gets hit with very serious hurricanes all the time. What really made Ian such a significant threat above and beyond that is the storm surge and rainfall, which isn’t captured in the way we categorize hurricanes,” Schlegelmilch said. The Saffir-Simpson Hurricane Wind Scale gives hurricanes a 1 to 5 severity rating based on its sustained wind speed, but this doesn’t always show the full picture.

“Most of the loss of life, at least on the mainland, is due to storm surge and inland flooding,” said Schlegelmilch. “The majority of damage in terms of cost also comes from water.”

Making matters worse, Schlegelmilch added that hurricanes are behaving differently now than in the past as a result of climate change. They’re more likely to carry additional water, with the potential to dump more water over less area. For individuals and officials, these factors add to the uncertainty that comes with preparing for any disaster, and having outdated models of risks certainly doesn’t help.

A lot of media attention has been focused on one county in Florida, which at press time accounted for more than half of the deaths reported from Hurricane Ian. Lee County issued a mandatory evacuation order just one day before the storm hit, which has led to criticism about why this wasn’t done sooner.

Evacuation can take a long time and is not an easy process, Schlegelmilch said. “It’ll be important to understand, when the full death count is represented, if that difference maintains itself or not, and whether or not timing was a significant factor. The more time you have to evacuate, the more time you have to do it right and to do it comprehensively.”

On the other hand, he noted that evacuations can have significant consequences as well, including death, extreme stress, and loss of livelihood. “It’s not a simple decision to make prospectively when you’re shrouded in uncertainty.”

One pattern we unfortunately see over and over again is the higher price paid by communities who are lower income, more isolated, and harder to reach, he said, where it’s more difficult to evacuate and resources may be limited. It has been and will continue to be really important to work with these communities on risk messaging and on equity issues.

“That’s going to be even more important as we look at more extreme weather events,” he said.

The Long Road to Recovery

Schlegelmilch said recovery in the hardest-hit communities will likely take a decade or more, at minimum. Many of the homes affected don’t have flood insurance, in part because estimates used to predict the frequency of these types of catastrophic flooding events “are often based on retrospective risk calculations and don’t do a good job of taking climate change and climate influences into account.”

Even if they did, he said, “we have a large number of homeowners who are going to have a hard time rebuilding, who don’t have access to the same kinds of financial mechanisms as other people. So we would expect to see tremendous inequity in the recovery process, unless there’s a conscious effort made toward over-resourcing communities that have a harder time accessing this kind of support.”