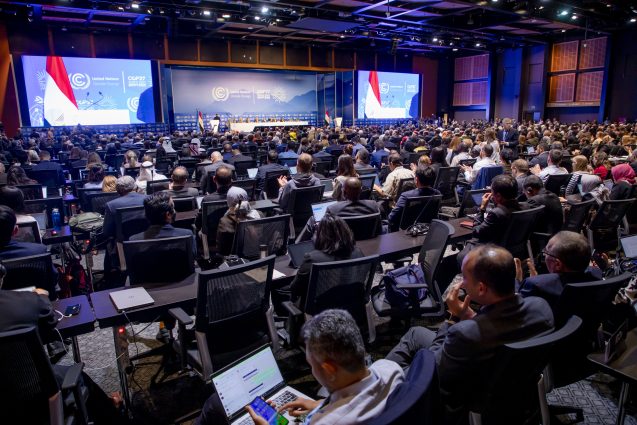 The United Nations climate conference COP27 wrapped up this weekend in Sharm el-Sheikh, Egypt. Negotiators kept the midnight oil burning to work through one of the biggest issues: whether to create a loss and damage fund to help developing nations deal with the consequences of climate change.

While negotiators ultimately decided to approve this fund, they did nothing to curb global emissions—leaving climate advocates disappointed in the lack of action on this critical issue.

Columbia Climate School sent a number of delegates to the 27th annual convening of the climate conference, where they delivered talks, hosted panel discussions, forged new partnerships and discussed ideas with envoys from around the world. We checked in with a few representatives from Columbia Climate School to get their take on what happened, in and outside of the negotiation room, and to weigh in on the most promising decisions—and where negotiations fell short.

“The climate crisis is worsening faster than predicted and requires serious action,” said Alex Halliday, founding dean of Columbia Climate School. “It’s great to see so many gathering to formulate ideas, strategies, examples and commitments. But things have to change much faster.”

The Loss and Damage Fund

Negotiators at COP27 agreed to create a fund that will support developing nations as they deal with climate disasters. This concept is informed by the idea that richer nations have disproportionately caused the climate crisis through their higher use of fossil fuels—while poorer nations bear the brunt of the costs—and suffer some of the most devastating climate disasters. This fund will require developed nations to help foot the bill for the climate crisis in vulnerable countries.

“The establishment of this fund is a victory for climate justice,” said Perrine Toledano, director of research and policy at the Columbia Center on Sustainable Investment. “Developing countries have been asking for it since 1992.”

While this turned into the main headline action out of COP27, it wasn’t even on the agenda when the conference started, said Melody Braun, senior staff associate at the International Research Institute for Climate and Society (IRI).

Representatives from the global south pushed for the fund as soon as the conference opened and forced discussions to go late into the night on the first day to ensure it had a place on this year’s agenda.

“The growing anger and sense of hypocrisy among developing countries was on full display in Sharm el-Sheikh,” said Jason Bordoff, co-founding dean of Columbia Climate School, in a post about the event. “Wealthy nations have failed to fulfill their promises to provide climate finance to the poorest countries.”

The details of the fund—and how it will be enacted—remain unclear, but Toledano reports there were also financial micro-agreements between nations that she hopes can serve as a model for how to implement this kind of financial relationship.

Lack of Action on Global Emissions

One of the greatest disappointments of COP27 was the inability to address global emissions reductions, the experts agreed. The Intergovernmental Panel on Climate Change has stressed that global emissions need to be cut by 43 percent by the end of the decade in order to limit global warming to 1.5 degrees, the amount agreed upon through the Paris Agreement in 2015. But, the global community is not on track to do that—and did nothing to change that reality at COP27.

“We negotiated the way forward back in Paris,” said John Furlow, director of IRI. “Now the problem is that we’re not doing what we said.”

It doesn’t help that climate negotiations have involved such a piecemeal approach to a global problem, said Furlow. Or that the highest emitters won’t fully commit to sufficient carbon reductions until other nations do the same.

“The way that we do things here on Earth is to mostly lead country by country, government by government,” said Furlow. “The atmosphere doesn’t care where the carbon is coming from. It’s all cumulative and it all mixes together.”

“The economic rivalry between the US and China, and China’s status as both an economic powerhouse and a developing country, make taking action at the national level difficult,” he continued. This problem won’t be solved without China’s full participation; China is responsible for over a quarter of annual emissions, he said.

“We have to move beyond this ‘they need to go first attitude’ or the impacts are just going to get worse and worse,” said Furlow.

The most vulnerable countries will continue to suffer the greatest consequences without meaningful action toward fossil fuel reduction, which could minimize, or erase, the work of any loss and damage fund.

“COP27 failed to raise commitments on mitigation and phasing out of fossil fuels,” said Toledano. “Which will mean more loss and damage for everyone and in particular for the most vulnerable. Climate inaction raises the contribution needs to a loss and damage fund and if these needs are not satisfied, the fund might just be a drop in the ocean.”

“This is a temperature goal that would literally allow certain countries to stay alive,” Braun added. “And beyond needing to enable countries to survive, we should be positioning people to thrive.”

Outside the Negotiation Room

While most of the COP27 news and hot takes will focus on the negotiations, Braun said there’s a lot of important work that happens outside of the negotiation room.

“It’s the only event of the year that brings together people from all over the world that work on the same climate issues, like mitigation, adaption, and loss and damage,” she said. “And when you put them all together, magic happens.”

While Braun and Furlow didn’t spend much time in negotiation rooms, they accomplished a lot at the conference on behalf of IRI. They spoke at events, shared information about what IRI does, and connected with potential partners all over the world to discuss specific, concrete implementation tools that can help governments strengthen adaptation plans and strategies.

IRI focuses on supporting developing countries as they deal with climate challenges. Braun estimates they made upwards of 20 promising connections that could turn into new collaborations for capacity building, climate services, and efforts directly supporting adaptation on the ground.

“We connected with many potential new partners that could turn into new research or new projects that will solve real climate problems,” said Furlow.

In addition to the work of IRI, the Columbia Climate School had a strong presence at COP27 this year. Here’s a roundup of some of the many places delegates could be found during the conference.